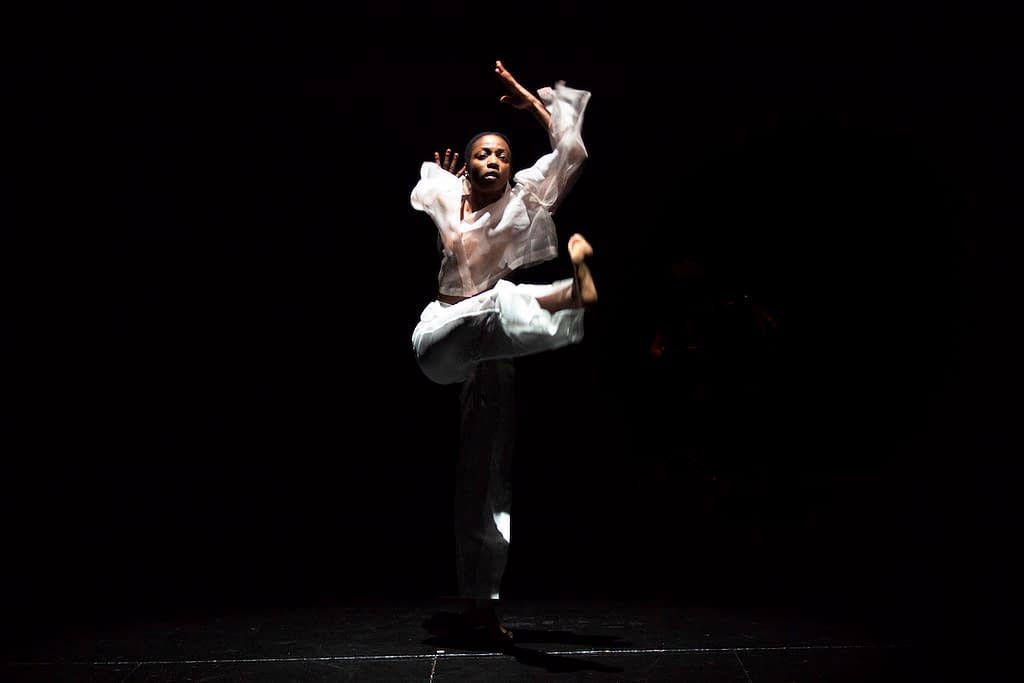 The Goldberg Variations, by Flemish choreographer Michiel Vandevelde, holds it between a dance piece, an experimental documentary and a lecture on western dance history. Clearly framed yet still inviting, this hybrid performance has a transparent political agenda: to have us reflect on the present status of the relationship between ‘democracy’ and ‘dance’. Seen at ITA, during Julidans, on 7 July.

All three performers step into the light, one by one, and start by telling us something about themselves and the piece we are about to see. Amanda Barrio Charmelo tells us in her native Spanish how Bach’s composition is used here to establish a dialogue between past and present. Oskar Stalpaert, who has Down’s syndrome, explains how a video of him went viral once, and that in this piece he sometimes dances relating to spatio-temporal impressions and in others gives free reign to his imagination. Finally, Vandevelde explains how, as a young boy, he was inspired by the way Steve Paxton developed contact improvisation as both a poetic and a political resource. Like so many things coming out of New York’s Judson Church during the 1970’s, Paxton’s contact improvisation stemmed from a desire to democratize dance (and society) by finding new ways to move and move together.

Particularly, as a source of inspiration, Vandevelde refers to the way Paxton opposed the fixedness of the Cold War mentality by repeatedly improvising on the Goldberg Variations, as played by Glenn Gould, between 1984 and 1992. To close the prologue, Vandevelde announces this piece takes off where Paxton left it. Juxtaposing movement (as performed by their differently abled bodies), Bach’s Variations (as played on accordion by Philippe Thuriot) and several audiovisual references (hinting at the discourse Vandevelde wants the performance to carry) what follows is a picking of our brains around the dance/democracy equation in present times.

The setup is democratic in that the roles of the three performers are equally divided, and in the extensive prologue being, in itself, an indirect manifesto against the label ‘inclusive dance’ referring to some kind of a lesser artform. The choice for Thuriot is also an interesting one, as his complex and warm arrangement of Bach’s variations on an instrument linked to cafés and market places equally challenges the divide between high and lowbrow art.

The images, projected on the back of the empty stage or on a translucent screen covering the whole proscenium, are thought-provoking: masses of people marching in anti-war demonstrations, soldiers and firemen dancing Gangnam-style, right wing demonstrations from across Europe. Popular doesn’t necessarily mean democratic.

The piece closes with a fragment of the must-see Hannah Arendt interview from 1964 on Zur Person. Through her words, Vandevelde reminds us that humanity (read: inclusion, or democracy) will only be achieved when, in our relating to one another, we do so sharing in a fundamental trust in the humanness of all people.

Despite the festival’s (still) brave choice to program this ‘inclusive dance piece’ in the venerated big hall of International Theater Amsterdam, the emptiness around me felt odd. It inevitably turned this performance into a very exclusive event – without the bubbles.