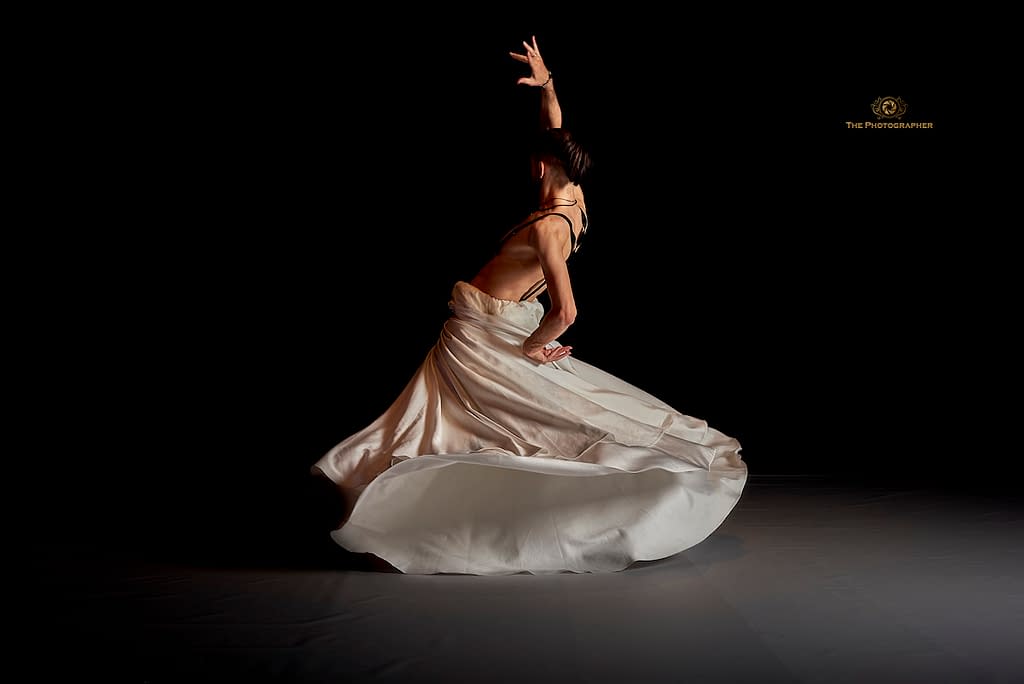 Arab, Spanish, French, Dutch, English. As he climbs a frail and used aluminium ladder, Moroccan choreographer Issam Zemmouri speaks a different language at every step. The object becomes a symbol for a geopolitical ladder, too, and of the equally frail, insecure reality he faces on a daily basis as a refugee. “How can I forget myself?”. “Don’t tell me not to speak”. “Don’t speak for me.” “I hate silence”. Zemmouri’s first solo Historia, seen on 25 September during Explorez Festival at ZID Theater Amsterdam, reads like a physical inner monologue in which every aspect of the makers’ vulnerable journey is turned into an affirmation of existence, and of strength.

Zemmouri opens the solo dressed like an archetypical street artist: velvet hat, open jacket, elastics holding up his baggy pants over his shirtless torso. Using a long wooden stick with a string of cloth attached to it as a partner, he engages in a playful duet that combines sailing metaphors, imperfect attempts at acrobatics, and very expressive movement phrases. There are more objects: a white wedding gown, a heavily knotted fishing line, a mirror. Zemmouri dances his journey turning every object into a double-edged symbolic representation of his reality. The fishing line is first used as the feathered boa he’d love to wear, only to get tangled up around his ankles and wrists, constraining his movement. The mirror, and the image in it, are both his last safe haven and the heavy object pushing him down. His true self seems to be both his blessing and his curse, in a world that hunts him for who he is.

“Ma vie comme un placard”. His life a full wardrobe, but he lacks the freedom to wear what he wants. Addressing us directly, Historia is fired up by means of Zemmouri’s voice. The earnest assertiveness of his tone is far more important than the meaning of the multilingual text, and one idea is bulldozed across in every language: he will not be silenced or spoken for – by anyone, anywhere.

Zemmouri’s movement style is wilfully non-academic, his dramaturgical choices blunt and in-your-face. At times naïve and overdramatic, the choreography still comes across as a complex gathering of traces of his particularly messed up, personal and creative journey. His fragile boldness is disarming. As for the objects, they seem as though they had been found in the attic of ZID during the creative process (a fact later confirmed during the aftertalk). Every aspect of this solo speaks of precarity, keeping it close to Zemmouri’s reality beyond the story it wants to portray.

There is power in stating one doesn’t need money to make poetry. There is also power in not hiding the imperfection that results from a systemic lack of resources and opportunities. In Historia, this roughness ultimately shows the unfairness of Zemmouri’s status, and far from asking for pity for it, he wears it with pride.