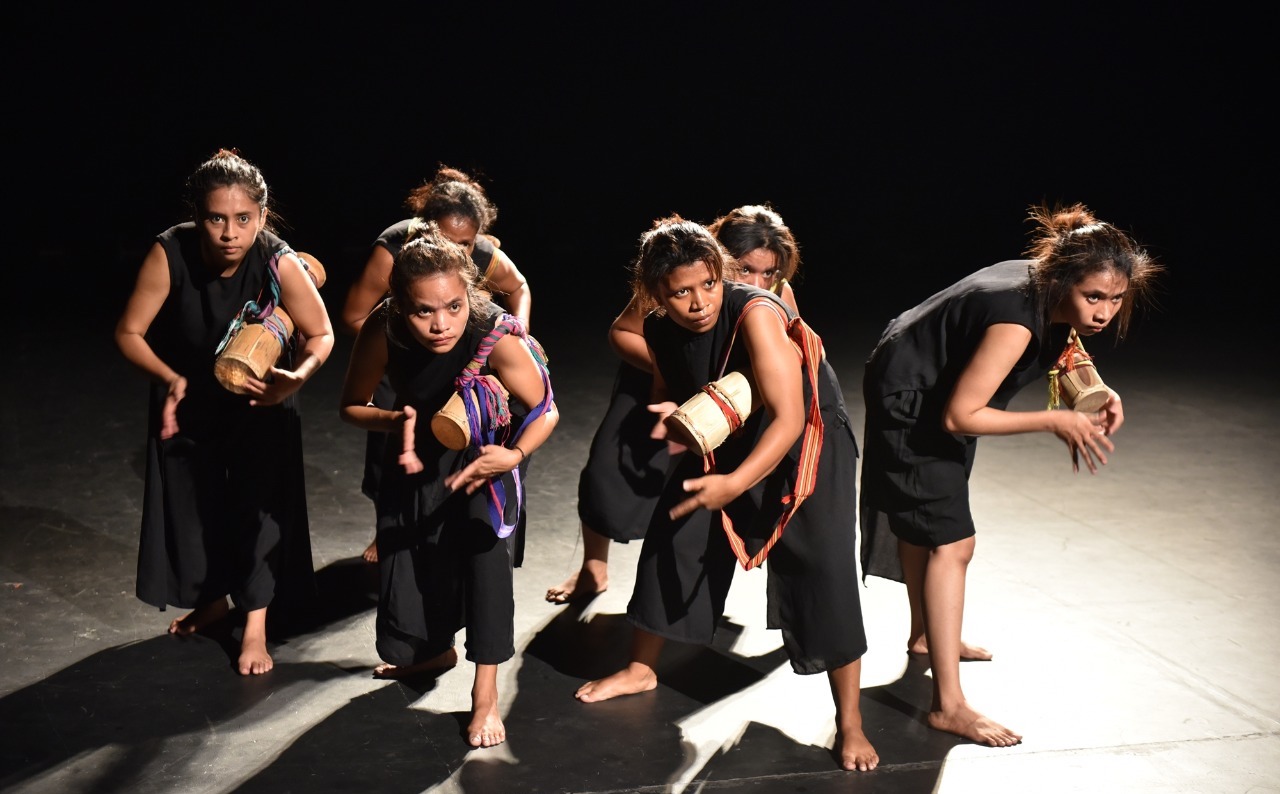 One of the themes of this year’s SPRING in Autumn programme is addressing the idea of togetherness. What does it mean to be together? The word in itself already implies the notion of a border, of a line separating a certain us from a certain them. In IBUIBU BELU: Bodies of Borders, choreographer Eko Supriyanto gives a ‘contemporary twist’ to the Indonesian traditional dance Likurai, long danced by women on the island of Timor to celebrate the homecoming of the men after a war. Multiple borders are being played with here. Seen on 28 October in de Blauwe Zaal of the Stadsschouwburg, in Utrecht.

Six female dancers slowly walk onto an empty stage. With their hair in tight ponytails and covering up their bodies with thick, black capes, they scatter horizontally at the back of the stage, evenly dividing the space with their bodies while standing in front of a line of lights placed on the floor. Walking slowly, their expression set to stern, they start exploring other ways in which they can divide the space with their bodies – without abandoning the image of this single yet morphing line. A border, continuously establishing a here and a there. When the line is finally broken, a new element appears: their voices.

The polyphonic game of vocal colours and volumes, displayed a cappella at close range, brings us closer to a distant poetic, historic and cultural context, and in the way they perform it, a certain fragility or insecurity resonates. Maybe this way of choreographically exploring different possibilities with familiar elements is a big step out of their comfort zone? SPRING Performing Arts Festival is, in the end, a festival that explores the experimental. The performers’ focus as they move and sing – looking around constantly, collectively caring for the tasks at hand and for each other as they go – allows for a meaningful sense of warmth and community.

In a third phase, the capes are abandoned at the back of the stage, like empty cocoons giving way to something new. This reveal shows they were all holding a small and elongated drum beneath their cloaks, presumably traditional instruments from their local context. Engaging in another basic game of composition with bodies in space, they put the drums to different uses. One has it represent a periscope, the other one a speaker, a third holds it like a purse. Meanwhile, the polyphonic song continues to develop, until at long last the drums are put to use and (together with the singing and a suddenly powerful, secure, and unified strain of choral movement) allow for a glimpse of the traditional dance from which this whole project stems.

For SPRING, the festival on the fringes that prides itself on bringing us the radically ‘contemporary’, a rather conventional choreographic proposal like IBUIBU BELU feels like an ill fit. But: is it? What is ‘contemporary’, in the end? The term has historically been owned by a white and western perspective when it comes to dance and the performative. By supporting Supryanto’s company to explore what a ‘contemporary twist’ to Likurai means to them, today, and inviting them to come and share the result of this research with us in Utrecht, SPRING does indeed open up the togetherness it stands for, while tapping into a broader, more paradoxically radical understanding of the ‘contemporary’ when it comes to the arts.

What You See – Daniel Mariblanca & Teresa Vittucci: In First Person