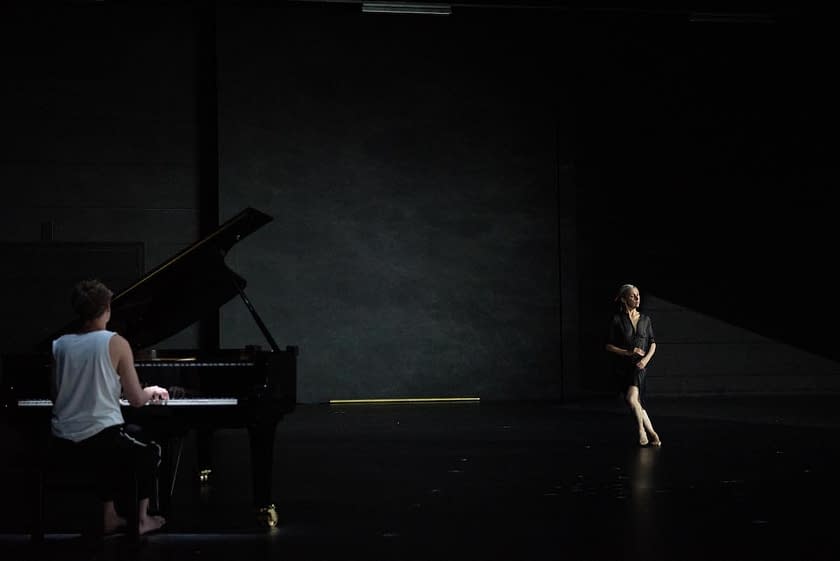 Julidans 2019: Anne Teresa De Keersmaeker is set to step onto the stage at ITA to perform Mitten wir im Leben sind/Bach6Cellosuiten, with four of her dancers and cellist Jean-Guihen Queyras. A sudden injury impedes her from doing so. Two years and a global pandemic later, she has come back to deliver on that promise – now with a two-hour solo, danced together with Bach’s Goldberg Variations as played by pianist Pavel Kolesnikov. A treat. Seen during the Dutch premiere on 4 July.

Looking her age (over sixty), with platinum long hair firmly held in a ponytail, De Keersmaeker opens by dancing in silence. Her naked upper body is visible beneath a transparent, knee-long black dress, a version of a costume as quintessentially hers as some of her moves. A golden necklace, elegant and sober, flickers as it bounces on her chest. Kolesnikov, looking not a day over twenty (he is thirty-two), sits barefoot at a grand piano with his back facing the audience and dressed in a white tank top and equally informal summer pants. After having watched her for a while, he starts to play. An unapologetic set of choices has been made here, and their evident age contrast is cleverly enhanced instead of being left unnoticed.

The whole thing is as see-through as her dress. Live concert or not, we are not here for him – so much is clear from his position. It’s Bach and her, her body and her movements which take centre stage. Her presence, prudish and teasing, aloof yet engaged with the room and the action, taints the tiptoeing and the hopping and shuffling around with hints of humanity. The rest is a conversation between codes, compositions, rhythms, artistic mediums. This is so much the case that the handful of obviously planned interactions between them as individuals all feel fake, too set, like an interruption.

Besides Bach’s variations, the deliberately visible, thin circular lines drawn on the floor organize the three dimensional space her body dances into. Hanging high, on the right side of the stage, an enormous, stretched-out rectangle of wrinkly platinum material (like that of a thermic blanket) shimmers in a soft light. It is replicated by another thermal sheet, this one crumpled close to the pianist on the left of the stage, its golden reverse more visible. Several rectangles of light appear and disappear to cover the distance between the two objects during the piece, proposing other divisions of space, thickening the sense of time passing by and providing a minimal dramaturgical cliff-hanger: at long last, the light reaches Kolesnikov and, as it intensifies, the rest of the stage fades into darkness. For a moment, the conversation between mediums turns into a monologue. The rectangle of light shrinks upon him, it slowly passes by and, having touched the golden, crumpled surface, it vanishes. With the beginning of the next musical chapter, a new light appears, the dancer comes back from the dark, the dialogue resumes.

What hasn’t been said already? At long last, this is the strongest of De Keersmaeker’s statements: as a choreographer and a dancer, she has been doing the same thing for forty years. And while her body might show some signs of attrition, what she does hasn’t aged a day. If anything, in these Goldberg Variations the minimalistic and continuously changing light-and-costume design turn a familiar recipe into a fine-dining experience.