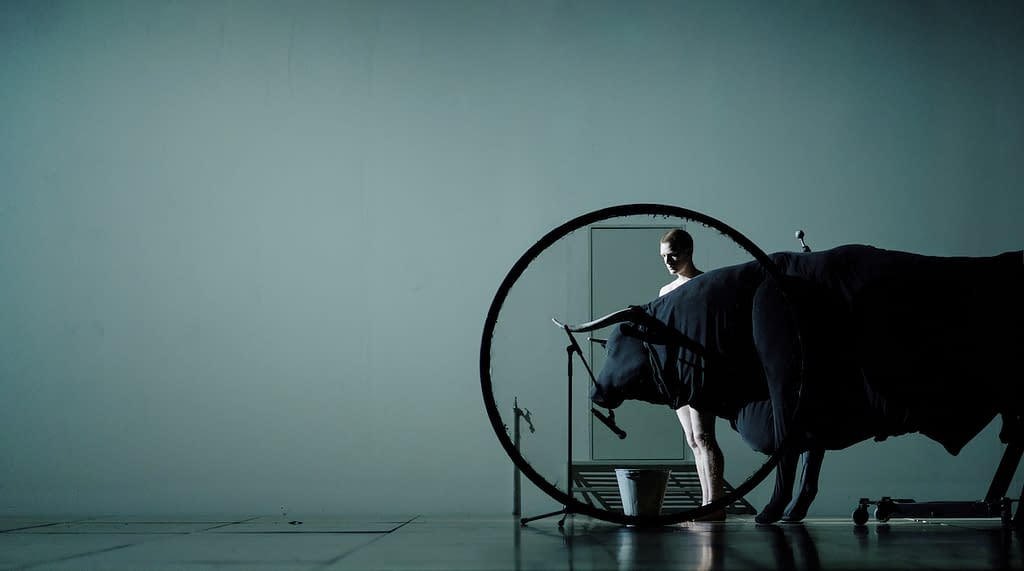 This big, international coproduction is cut from the same mould that has rendered this visual-artist-turned-choreographer famous. Awe-inspiring, and with one of the broadest palettes of cultural references the Western stage has to offer, Papaioannou’s meditative and mythical compositions are somewhere between the dreamlike sound-and-set-designs by Peeping Tom and the durational, aesthetic-turned-existential experiences by Bob Wilson.

In Transverse Orientation, the use of perspective, lights and shadow, and the contrast between the whiteness of the performers’ skins and the black costumes they constantly slip on and off, make for truly mesmerizing optical illusions. Sculptural bodies seem to float, become impossible creatures, or refer to that origin story where male and female started out as two parts of the same entity.

One tableau follows another – without need for a narrative link. True to his visual point of departure, Papaioannou’s choreographic work rather reads as a walk through the vast depot of an art gallery. Actions are taken without leading anywhere, a character steps in to add a drop of colour, only to disappear in the next scene. As in Since She (2018), the hesitant and stumbling way in which he has the dancers set up some of the tableaus creates a universe where tender vulnerability is a welcome constant. Folded into it are a life-sized prop of a bull – now a minotaur, now Zeus birthing Europa, now…? – and other objects like a fluorescent light stubbornly flickering while falling off the white wall in the back. Zeus’ lightning bolt in decay? References, symbols, myths. Hints, traces, jokes.

The slightly durational structure turns the seemingly random gathering of images into an invitation to really abandon oneself to the act of observation. A calm taking in of the piece and of one’s own associations. The Europa reference, for example, made me see metaphors of the continent’s struggles and failures, as the performers collaboratively stumbled for ages to build a structure out of pieces of white foam – only to have it crash at the last minute, becoming an ephemeral sea with three pairs of legs sticking up out of it, drowning.

Even if the venue proved to impact the viewing experience (the seat appointed to me in the stalls was blind to a quarter of the stage) I stepped outside after the show feeling empty and speechless. I met a shimmer of rain and, happy to be alone, I stretched out the moment crossing the Amstel river and walking for a while. As in the last and stunning image of the piece, the magical afterglow of long summer days was still in the air.