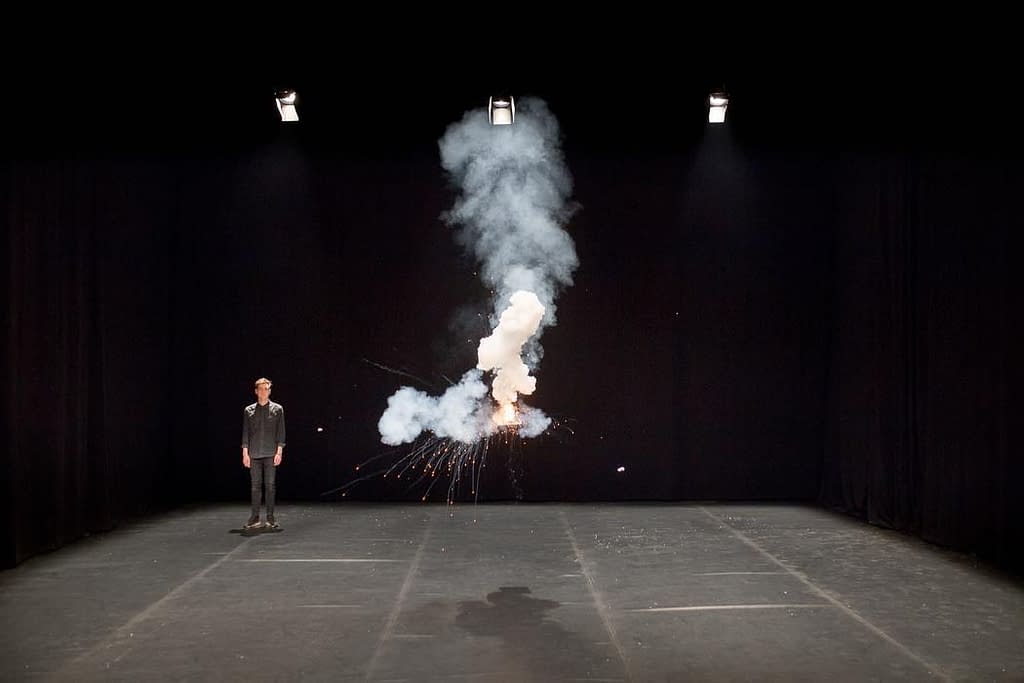 “Again: You are in café De Richel, waiting to get inside the theatre. There is a nice vibe. Suddenly, the music stops and you hear a voice aggressively yelling at you from within. It tells you the show is about to start, that taking pictures is not allowed and that the play is not suitable for children under 18 years of age”. One of the ways in which Swedish actor Iggy Malmborg turns reality into fiction in Physics and Phantasma is by referring to our actual entrance into the auditorium. The show is a steep yet enticing monologue that stirs up time, space and the representation of what we call ‘the real’ and shakes it into a rather explosive cocktail. Seen on 14 October at Frascati 4 in Amsterdam during Frascati International week.

After the yelling, we walk in to find a neutrally illuminated, empty stage. Once we are seated, the same voice now calmly reappears from within the curtains in the back and starts describing the body carrying it. It speaks of how it looks, how it feels and how it acts. Instinctively we imagine multiple phantasms of ‘Iggy Malmborg’. Can the voice be trusted? How close to the actual Malmborg will our images of him be? Just when the truth is about to be revealed – a promising hand already peeping through the curtains – all lights fade out, and the suspense holds a little longer. Finally, after hearing the voice travel across the stage for a while, the lights come back on and we get to match the performers words and our imagination with reality. He looks back at us, now silent, apparently also checking his expectations of us against what he sees.

What follows is a very well-woven and at times very witty monologue in which – instead of appealing to our imagination (using the theatrical means at his disposal) to make us travel someplace else, Malmborg keeps circling around the present and its potential as fiction. He describes the space we are in, how empty it is, and how he intends to fill it. He speaks of the way we accessed it via café De Richel, and does so over and over again, combining facts with fantasy. The thing itself, that which actually happened, becomes only one of the possible ways to bring that fragment of the past into the present of his story. He also speaks of the future, of what will (might!) happen during the performance, and now and again he lists things without which the performance cannot start (while it is ongoing). Spoiler: the entire audience being familiar with the name Gilles Deleuze is one of them.

Between a phenomenological instruction and a fragmented act of storytelling, Malmborg’s monologue nonchalantly addresses complex metalinguistic and philosophical reflections without getting tiresome – which is an achievement in itself. The text is not only witty, it is also brave, as at a certain point it really stretches what is acceptable for us to imagine, speak of, story-tell, or bring to reality by means of words. The 18-year age limit is not a joke.

Physics and Phantasma is an intellectual exercise perfectly fitted for the theatre, in which everything revolves, starts and ends with the relationship between fact and fiction, actuality and possibility. And in which one can toy with the ethical limits of representation – and the question if there should be any. Leaving the theatre I wondered if this was not, in the end, the central question Malmborg’s stream of words was intended to bring to the surface.