What You See – Daniel Mariblanca & Teresa Vittucci: In First Person 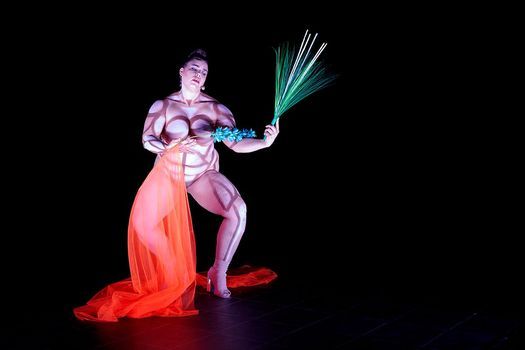 ‘Art can change the world’, is this year’s headline of the What You See Festival. A multidisciplinary, one-weekend event opening curtains and peeking into diverse perspectives and realities surrounding gender, identity, and the human body. How? By having us look at a transgender body at close range, for example, feeling its pulse and its rage in In First Person: The Playroom by Daniel Mariblanca. Or by ironically exposing the male gaze hiding behind the image of the Virgin Mary in Hate me, Tender by Teresa Vittucci. Two Dutch premières united by raw nakedness and the symbolic use of veils, seen at Theater Kikker on 19 November.

“On your heart”, a company member instructs me as she hands me a sticker bearing my name. Before we are invited to step into the auditorium one by one for In First Person, we are asked to identify ourselves. Once behind the door, a shiny mauve curtain creates a hallway, a labyrinthine hint to emulate, perhaps, a passage towards a given core. Turning the corner, I notice the small stage at Kikker has been made even smaller. Paper-covered panels frame a meter-and-a-half deep performance space, warmly carpeted in thick, bright-red wool. More curtains, in fabrics ranging from carmine latex to translucent tulle, reinforce the feeling of having stepped into somebody’s intimate chamber.

An oddly impersonal human being, face covered with a male-presenting mask, sits fully naked on the carpet as I step in. The unfriendly mask, together with the ominous electronic humming that serves as soundscore, contrast sharply with the warm atmosphere. It feels uncanny to be here. This feeling is reinforced once the human starts to speak, his voice so heavily distorted by a vocoder, it’s hard to understand the words: something about being happy to be here and, later, about his grandmother once killing a rabbit for dinner.

Soft and harsh, aggressive and fluffy. Contrasts which later translate into movement, as the body starts crawling, contorting and explosively throwing itself onto the floor with great stamina while exposing every inch of its vulnerable nakedness. This body, and the story it carries, are clearly not just one thing. They are particular and complex, and become increasingly personal when, at long last, the mask disappears. Grabbing the microphone again, Daniel Mariblanca now starts singing his story to a groovy tune, stating his trans-right to exist, telling heteropatriarchy to shut up and cis-people to awaken. Assertive with a smile, he ends by making eye-contact with every single one of us, embedding our names into his lyrics (read: into his story) and individually asking us to cross the stage to exit via the back door.

While the stickers, the song, and the access and exit protocols all read as invitations to step into Mariblanca’s reality, other choices – like the mask, or the moving around and tearing apart of paper panels as if they were cocoons, an action which felt forced and clumsy in this suffocatingly small arena – kept any sense of intimacy at a dramaturgically imposed arm’s length.

Her body shaped only by black lines and circles painted onto it, Teresa Vittucci’s Hate Me, Tender also combines the actuality of her nakedness, the sharing of personal stories and the use of symbolic imagery within an interdisciplinary frame. But to a quite different end, and in a much more effective setting.

Vittucci opens the performance lying on a big, diagonally placed white square – a bit like a low boxing ring without the ropes. Her body is covered by a phosphorescent, orange and translucent veil. To her left, there’s a tall vase with white lilies and other plastic flowers. “Oh Virgin pure, you are pure because you are a virgin”. As she starts singing this seemingly innocent psalm in a loop she slowly moves on the floor, playing with the veil to cover/uncover parts of her body – and thus using it as a symbol for both sanctity and sin. After a while, she breaks the fourth wall to jokingly invite us to sing along: “You should know the words by now”.

What follows is a collage of scenes that addresses a range of cultural notions surrounding the idea of (w)holiness, the binome virginity/purity and the hymen-myth. They are rendered powerless by means of irony. She tries and fails to stuff the veil inside her ‘vagege’ (“shht! no one talks about the vagina!”), compares the tearing of the hymen to the feeling of opening the seal of a new MacBook Pro (“only then you know it’s yours”), or interrupts an account about her mother asking her not to mock the Virgin to clean the floor with her tongue (“It’s dirty in here!”).

Part-performer part stand-up comedian, Vittucci laughs theatrically and has us laugh with her at apostolically absurd and masculine ‘truths’ – narratives that nonetheless continue to imprint heavy marks on the female body. A refreshingly funny exercise in mental deconstruction.

Program What You See Festival 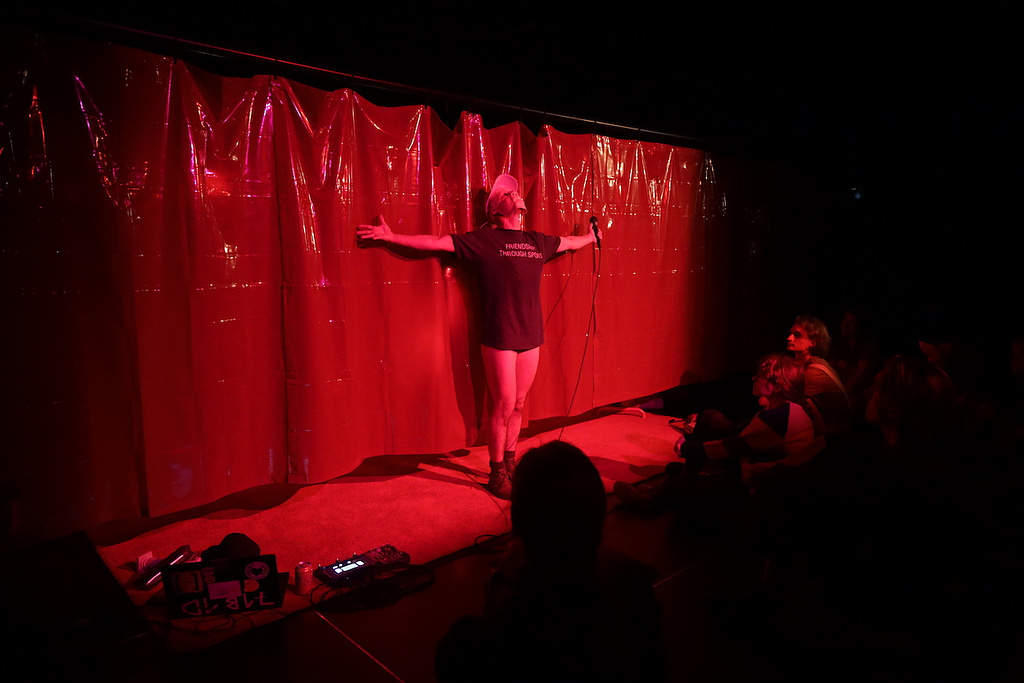