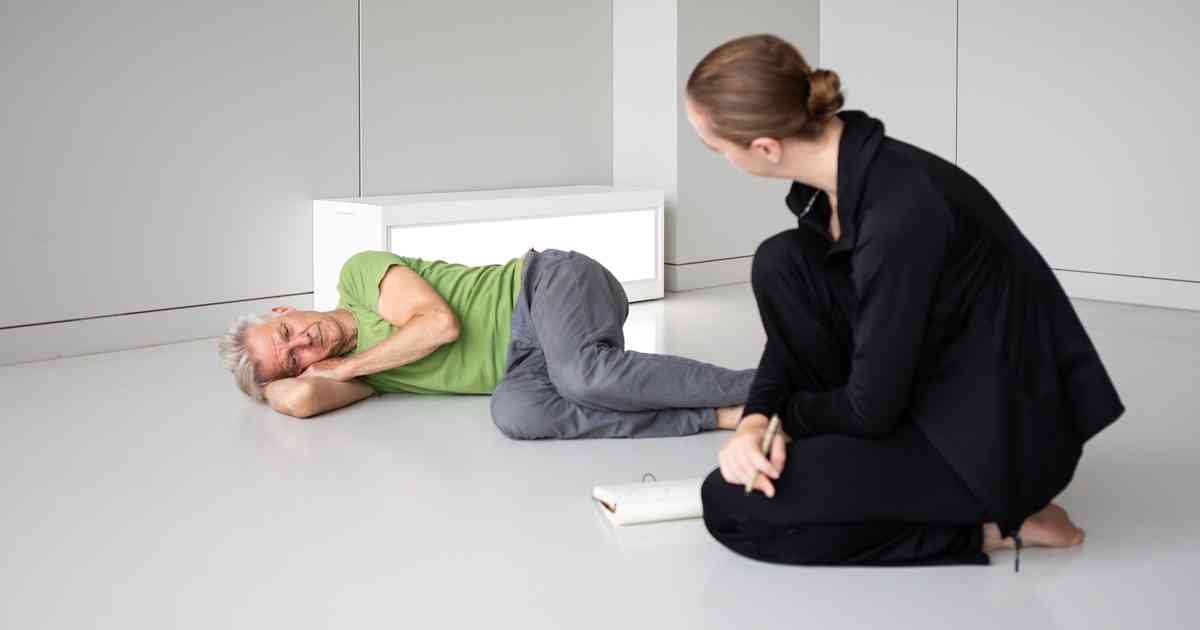 The Netherlands is slowly but steadily reopening. The restrictions on theatres and museums, however, are more on the slow side. One week before it started, SPRING Festival Utrecht was granted permission to offer live performances, becoming one of the so-called test-events before theatres across the country follow suit after 5 June. To the 1.5-metre rule and the use of masks upon entry, an added hurdle in the form of a negative test-result was asked before each performance. The whole process leading towards each SPRING performance was tinged with slight sadness. Walking from the test-site to the theatre, amidst fully booked terraces and smiling people going for sunny shopping sprees, I felt a bit like a pariah. First world problems, I know. But still. A feeling undoubtedly fuelled by the lack of cultural vision shown by the Dutch government so far. Asked on May 11 why cultural events were so late in the reopening schedule, the Minister for Health, Welfare and Sports Hugo de Jonge replied they were not essential. ‘You can always play a DVD instead’.

What follows is a letter of sorts, and two postcards – three testimonials of experiences lived in the context of shared, artistic events. No DVD was found to be a valid alternative.

A letter to dancer Rebecca Collins

For the first hour (out of three) of Katja Heitmann’s Museum Motus Mori, a ‘personal encounter’ with a movement archive, dancer Rebecca Collins and I sat down in one of the white rooms of Utrecht’s Fotodok Museum, and we talked. Four or five neutral wooden boxes, big enough to serve as a small bench, were scattered across the floor. Rebecca asked me to show her the physical positions I played in as a child, the ways I remember my parents moving and the way I embrace my partner – and asked me about what those positions and movements spoke of, what they meant to me. All the while, she observed and mirrored my gestures, telling me now and again what stood out and thereby also recording residual movements I make while I talk.

The ‘Museum’ itself had been explained to us (four) audience members upon entry. Moone Rovers, Heitmann’s assistant, told us in the lobby about the people who had come before us since the project started in 2019. Scattered on the floor of the hallways leading to our designated galleries, sheets and more sheets of thick, grey paper with drawings and scribbles, always introduced by a name, a place and an age, proved her point.

Half way through our talk, Rebecca started proposing other gestures to me. Drawing from that archive, she connected my hand-to-chest combination to that of a 68-year old nun from Düsseldorf. Then, she showed me how that woman slept, and asked me to mimic her and wonder if I related to that physicality. Lying on my side with my eyes closed, picturing myself on the far corner of a bed, my whole body a knot of muscular tension (poor her, by the way), I figuratively turned a dark corner in my mind. I guess it was bound to happen after time spent rummaging through physical memories – but I did not see it coming. I had come for a performance event, not a therapy session. I hesitated – was this the time, the place? – and when Rebecca assured me I need not go where I did not feel comfortable, I decided it was ok.

So I shared a story of grief, of perinatal death in my closest circle, of how during the months surrounding that event I would find myself just standing, my body in full tension. Everything, my feelings, my presence, my existence: unworthy. Cramping up as an attempt to become invisible. The conversation moved on, and other gestures by other people were linked to mine as Rebecca continued to gently recollect what I was willing to give. When the hour passed, I left the room. 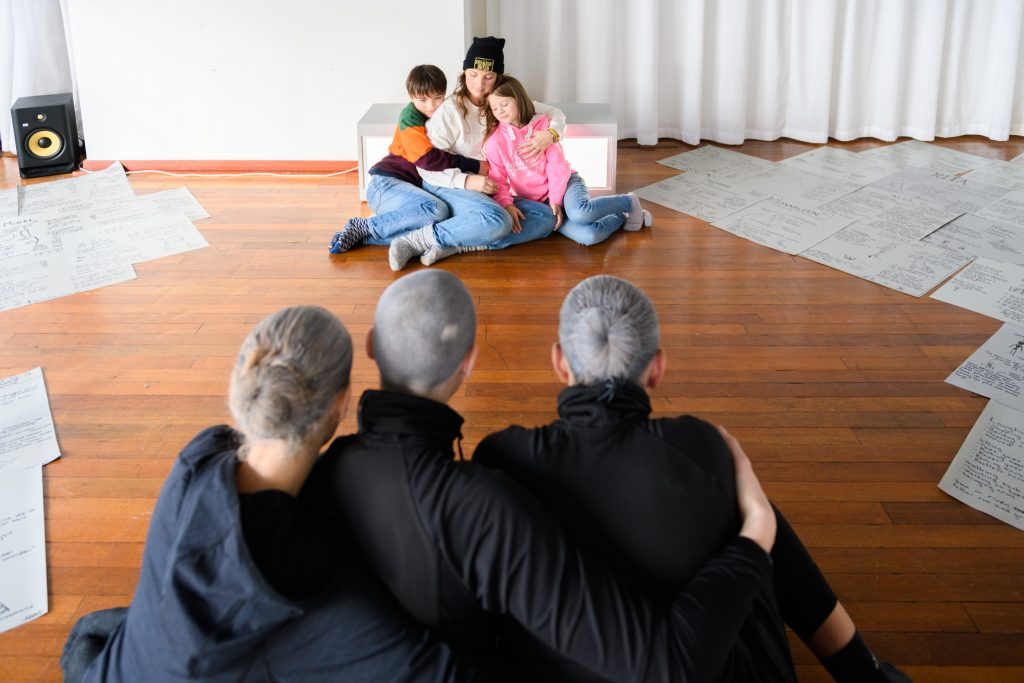 After a short break, Moone led me back to my gallery-space. I was invited to sit on one of the boxes, now in a corner, with Rebecca standing on the opposite side, dressed only in a light-grey slip. Every fold of her body in sight, she engaged in a one-hour solo, threading gestures of mine in slow motion, one at a time, with those of others who now lived alongside me in this museum. The detail in her embodiment of physical actions that I truly recognized as mine was impressive, disarming. Avoiding my eyes at all times, ‘Rebecca’ herself seemed to disappear – as so often happens when people dance – and so this whole afternoon was, and continued to be, about me. Through me, it became a homage to my history and to the people in it. I wholeheartedly cried for most of the solo, and saw a tear on Rebecca’s cheek too.

What is Museum Motus Mori? For one, it is a transparent celebration of a dancer’s wisdom. Like the empathic Rebecca Collins, able to turn herself into a vast Memory Palace with close to a hundred mobile, metaphysically living sculptures in it. She explained how in the context of the project the company keeps on meeting to rehearse, nurturing and conserving the movement repertory – and all it entails – analogically. Other than the sheets of paper, no record of it all remains.

The way the project is set up – introduction, guidance, framing – shows Heitmann and Co. are very aware of the preciousness of what they ask of their audience. In exchange, at least in my case, I had an opportunity to heal, giving past events a new moment of existence, translated into beauty, into an artistic expression taking place outside – but still through – my body. What an enormous gift to receive in a one-on-one setting. A therapist would have charged me five times as much. The thought made me feel for Rebecca, and hope that she is protected and rewarded enough for the complex and sensitive job she does. But that is not for me to say. I just can say: thank you.

Postcard 1: Cosmic A*, by Charlie Prince

If Katja Heitmann asks her audience to concede part of their movement heritage to her Museum, dancer Charlie Prince offers us a guided tour across his own archive in Cosmic A*. On a bare stage lit by ten square, orange glow lights in the back, he excavates his own body ‘as an archaeological site’, in his own words. Archive, site, museum: all places where things and traces of things survive. Front stage, in a corner, Joss Turnbull accompanies him mixing live percussion with recorded voices by Mouneer Saeed and Mustafa Said, all electronically modified on the spot.

Prince is a magnetic performer, one of those dancers who hypnotizes the room by attacking his actions like a dog does a bone. For the first half of this hour-long solo he places different parts of his body under duress. He explores the hyperextension of his arms and shoulders, pressing the floor with one wrist while contorting his second arm behind his neck. Later, the struggle moves to his breathing, his chest, his face muscles – and if his upper limbs are freed in response to the less mobile input of his nose or tongue, the focus remains on the tension of his convulsions.

Sounds of a street, birds, distant voices speaking in what I can only guess is Arabic – Turnbull mixes it all in a suspenseful score. At one point, after being seated front stage for a while, looking at us while trying and failing to emit words, Prince stands up straight and starts turning before attacking a final spree. Vigorous and explosive, he now uses his limbs to their full extent, stomping the floor as he crosses the stage. His unwavering commitment in controlling his physical appearance is daunting. I even take it as a proud shoutout of beautiful and bitter dignity from a character who has not been able to find a voice.

‘Beirut 2020.’ I read the opening words in the programme referring to Prince’s birthplace in Lebanon after the performance: ‘A country that moves back and forth between its potential and its tragedy. Is he [the dancer] feeling the truth or is it just projection?’ Cosmic A*: a complex and personal story, expressed in physical brilliance and grounded in one of the multiple, restless contexts wherein he belongs.

Postcard 2: In Other Words, by Ingrid Berger Myhre

Speaking of stories told through dance: enter In Other Words, by Ingrid Berger Myhre. Created and danced with dancers Pablo Esbert, Chloe Chignell and Thomas Bîrzan, this choral choreography plays in the space between the words dance and language.

Physically, they use standard choreographic tools like repetition, variation, placement, level, or plane to modify a given move or phrase. Verbally, they combine these actions with verbal connectors and adverbs such as ‘however…’ or ‘as opposed to…’. The four performers thus dance around the syntagmatic possibilities of this encounter, in an hour-long meta-performance which manages to remain light-hearted.
In using language, they ironically enhance a paradigm of dance – an artform that avoids literal meaning and favours concepts like reverberation or association instead. At another point, the dancers also underscore the different way in which words and actions have an effect over space and time – or open up a pathway for the listener/viewer’s imagination. Introducing a phrase of movement, they say it happened ‘several minutes ago’ and a few minutes later, before repeating the action, that it therefore ‘never really happened’. And yet, it very much did. Twice!

All this – and more – choreographic wit comes supported by a swift dramaturgic rhythm, composing their experiments around dance and language – or dance as language – into a slightly absurdist whole. Hanging from several cables behind them, an almost stage-wide, brown, wrinkled sheet of paper: a map of sorts. Yet another accumulation of traces, composed on a given plane, and relating to both past and possibility.