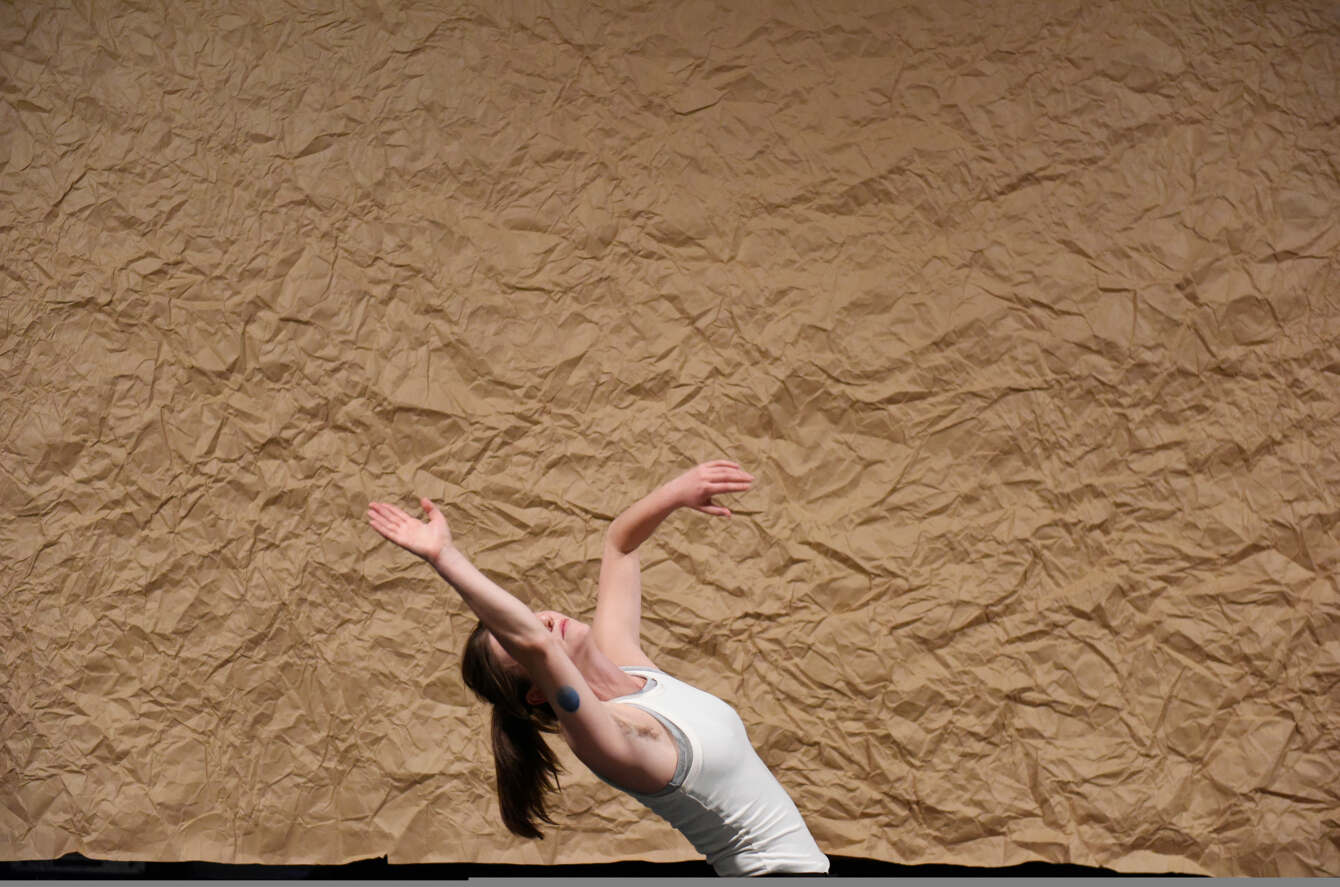 In Other Words is an example of how a dance piece can be as witty and ironic as choreographically sound. A choral and paradigmatic monologue with four voices and four bodies, with no other intent than to think and act in terms of linguistic and signifying possibilities. The latest work by Ingrid Berger Myhre has arrived to SPRING Festival Utrecht a year after its original premiere was due. Seen live, at long last and with a smile, on 21 May.

With dancers and co-choreographers Pablo Esbert Lilienfeld, Chloe Chignell and Thomas Bîrzan, Berger Myrhe set out to explore possible analogies between dance and language as systems for human communication. Analogy being truly the key word here, this piece is indeed a quest for points of contact between the two systems. They feed off each other in the choreographic structure.

Exhibit A: One of the things a verb can do is make you travel. In space, but also in time. One of the things dance does is enhance the present, manually modifying this space and time while you watch. By the simplest of strategies, verbally placing their actions in a past or future tense, the dancers frame what we see as spectral images, ghosts or visions, while performing the movement and spacing very much in the present. Pablo, at one point: “This never really happened”. But it did. We connect the dots, are made aware of the different temporary dimensions at play. Smile.

Exhibit B: With a hilarious wink to a common reality in a dance studio, the four dancers combine spoken conjunctions and adverbs to announce movement phrases. “This… whilst… and then… as opposed to…”. Smile, chuckle. Variation upon variation of gestures and movement phrases, repeated here and there, placed on different planes and levels. Literary figures of speech are also added into the mix: words offering a hyperbolic description of a small gesture, words suggesting metaphoric readings of a given sequence. Words and moves calling the imagination into action in a collaborative way.

The possible parallels between dance and language are manifold and seemingly endless. Both the piece and this review could go on forever. While clichés like ‘dance is the language of the soul’ continue to burden us with the idea that moving, feeling and thinking are separate phenomena, dance lives on as a very articulate and – also rationally – clever language. Made up of signs, composed into sentences, handled in verbs, actual and imagined, emitted and received, decoded and interpreted by a reader, a listener, a spectator.

This plane is the dancers’s playground in In Other Words. And they certainly do play. As a backdrop to their actions, a wrinkled sheet of brownish paper hangs from a set of frail cables, hovering above the floor. A simple, yet effective reference to the accumulation of traces, directions and points of contact this event also wanted to be.

Calendar In Other Words