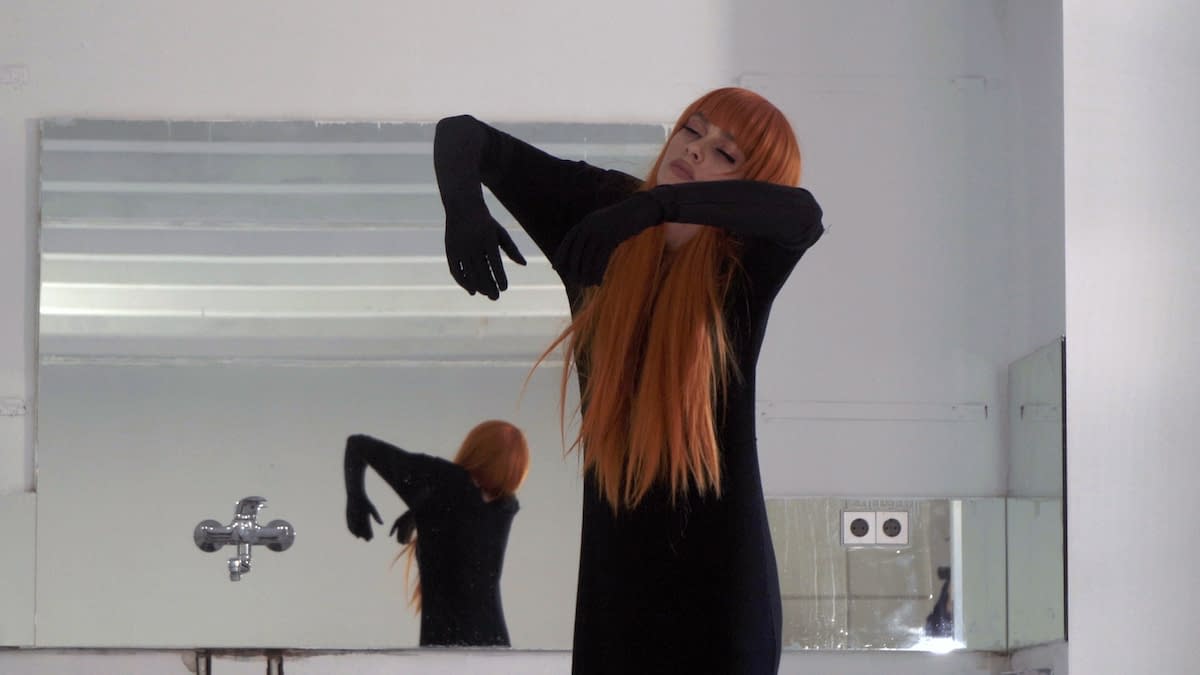 On 6 June, four SNDO alumni – Tamir Eting, Ingeborg Meier Andersen, Carolina Papetti and Fernanda Libman Fonseca – presented the work created during their 6-week residency at the Maison Descartes in Amsterdam. Henotic consisted of four performances, five video works and a sound installation, all scattered around this four-story palace, formerly home to the French Institute and currently a temporary home to exhibition-site Reneenee while it awaits a new destiny.

The five videos showed images recorded during the first week of residency, and treated the time spent in the building as a vindication of that concept, of the need for emptiness and inefficiency. They also evoked a paradoxical feeling of being excluded. The four young makers performed themselves in front of the camera and edited most of the videos, which also speaks to a desire to sign off not only as authors, but also as censors and guards of their own appearance. Alongside the clear routing and the (covid-imposed) limits to our movement, this overall feeling of reserve turned us into guests at their Maison; receiving ends, not there to share in the potency of that empty space in transition.

Their interventions did cherish the Maison as such – and some of the performances truly sucked the potential for poetry out of its walls. In The Tiniest Act, for example, Tamir Eting beautifully merged found objects into his evocative choreographic proposal. The action was allocated to two actors: one old, one young; one dressed, one naked; one speaking, the other silent; one moving, the other still (and then the other way around).

To underline the richness in contrast, a series of objects including two spoons, a green glass bottle and bowl and a magnifying glass, were used for form (the young Charles Pas building a choreography on the possibilities they offered, measuring his naked body, placing them under his buttcheeks, etc.) or as signifiers. Donald Fleming, the older actor, used the magnifying glass to read from a book. The text sounded like a stream of consciousness, or fragments from a dream-notebook, impossible to follow and thus more of a soundscape. The deep, velvety tone of Fleming’s voice bathed the whole in nostalgia, reminiscent of innocence and fireside tales – blissful states of not-knowing. A labyrinthic piece, well-structured, inviting and filled with mystery.

Carolina Papetti’s Giulia or not also made good use of the space. Through an open door in the back, in an otherwise white room, a lavender glow streamed in for colour. Every other window or door in the room was engaged too, with arms in black gloves, a whole body or a plate of spaghetti appearing out of them. The two performers, Catarina Paiva and Jessica Matheson, lured us into the enigma of their characters. Between living dolls and AI-systems, their physicality reminded me of Marlene Monteiro Freitas’ exhausting strategies; the overall aesthetic of Tim Burton’s Edward Scissorhands. Showcasing a clear, personal artistic vision, Giulia or not was also frustratingly arrogant in its length. In the text Papetti admits she doesn’t care about our reading of the work, or our boredom. The absence of an exit for the audience turned the Maison into a place for the author’s tyranny.

Stellarosa, by Ingeborg Meier Andersen, struck me as the clearest example that the ‘together’ in the programme title did not refer to us. Everything in this duet, danced by Meier and cellist Peter Scherrebeck Hansen in the interior garden, referenced the solipsistic 1990s: its presentation as a work-in-progress, the tiresome looking around with affected intensity, the navel-gazing, the movement being ‘informed’ by the plants and water from an improvised brick pool. An opportunity for me to sunbathe and look around at the bees literally ruling the place – and wonder what will happen to them, once the Maison’s transition ends.