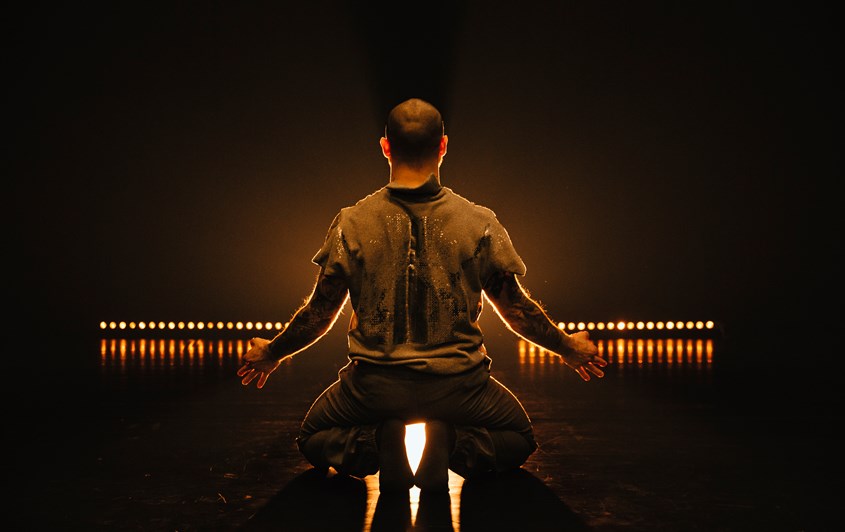 Kalpana Raghuraman took the sudden shift in planning imposed by the pandemic as an opportunity to delve into artistic collaborations which had been broiling in her mind for a while. Both Tara and Fluïde, seen online within the frame of Korzo’s 2021 edition of the India Dans Festival on 7 May, are duets between a dancer and a musician resulting from this stretched-out and odd time for creative reflection.

In Tara, dancer Indu Panday converses with bass-guitarist Mark Haanstra. The conversation is elegantly divided into three sets by shifts in light design. At first, three circles organize the floor diagonally: Haanstra in the back, Panday in the middle, and up front a long chord of what, to me, seemed a line of raisin-like LED-lights hanging from the ceiling. The program speaks of the attraction of stars upon the earth as a source of inspiration, but the references to this theme remain blissfully schematic: the starry LED-lights of my imagination are later revealed to be and used as a Ghungroo – a series of jingle bells on leather cords, the circles of light in the dark merely hint at a planetary drawing.

I say blissfully, because thanks to a smooth audiovisual plan the formal conversation between the two artistic mediums was more than enough to get us caught up in a cosmic sense of the moment. Tara feels like a well planned and studied improvisation, where both performers have had the time to get to know each other, slowly developing an evocative way of playing together as they individually excel in their technical abilities. The attention to the precision of her moves and the swift contrast between sharpness and fluidity in her body render Panday fascinating to watch, the intricacy of the rhythms she counteroffers to Haanstra’s looped game of bass-guitar a labyrinth of its own.

From my white, western, new-to-Indian-dance-languages critical vantage point I will venture to say that Raghuraman succeeds at what I read to be one of her company’s main aims: “to uncover the mystical and multifaceted nature of countless Indian sources in a way that speaks to us today”. Translated to Tara: an exploration of the mystical embedded in any in-depth conversation between movement and music – in this case, between an electric bass guitar hooked to a loop station and a present-day, personal blend of the classical Indian dance forms Kathak and Bharatanatyam.

The second piece of the double bill, Fluïde, consists of a conversation between breakdancer Denden Karadeniz and Indian song-singer Shashwathi Jagadish. As the choreographer explained during the aftertalk, Fluïde’s exchange also happens physically, exploring the contrast between Karadeniz’s rugged, muscular body and Jagadish’s more ‘petite’ embodiment. A possibility which was not an option in Tara simply because Haastra was harder to move around with his guitar.

The combination of these conventionally distant choreographic and musical universes allows for interesting moments. The earthy and physically demanding movement phrases are indeed delivered with tenderness and fragility at certain points, thanks to the way Jagadish sings and even looks at them over the course of the piece. A light french red wine elevating the dark tones of a strong cheese.

However, the basic choreographic resources put in place to connect the two – a lot of action-reaction, of borrowing a movement to transport it into space, and of spiraling around each other up-close and from afar – stand in the way of a real interaction. Effective but shallow, the choreographic structure distracts from an otherwise interesting exchange between the two performers.