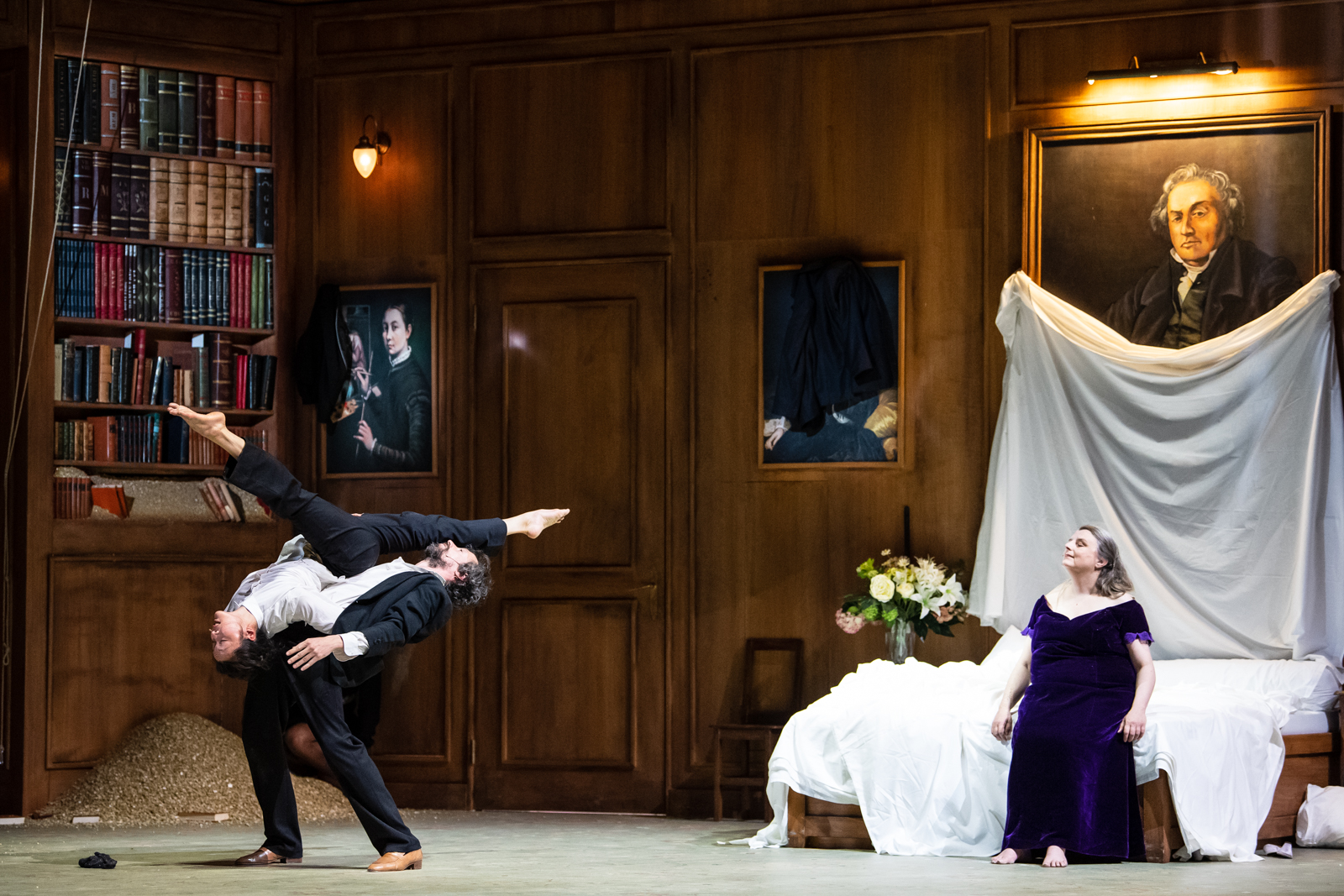 Peeping Tom’s opera debut Dido & Aeneas, made in collaboration with the Grand Théâtre de Genève and Emmanuelle Haïm’s baroque ensemble Le Concert d’Astrée, feels more like a meeting-meant-to-be than a first choreographic exploration of a new genre. Purcell’s only opera seems to have been sucked into one of the company’s surreal, hypnagogic hallucinations, and rocketed into the 21st century. Seen online on the Grand Théâtre’s digital channel, freely available there until midnight on 9 May and on Arte Concert until 2 November.

Stage director and choreographer Franck Chartier has chosen to fold the Genevan singers (and with them the original libretto) into a parallel universe ruled by an older, bitter and despotic version of Dido, embodied by his long-time collaborator Eurudike de Beul. Other Peeping Tom usual suspects, like dancers Chen-Wei Lee and Brandon Lagaert, populate the stage playing her servants. Purcell’s baroque filibusters are danced to with theatrical quirkiness, as are the framework scenes in which an additional, thriller-like score composed by Atushi Sakaï links the storytelling to Eurudike’s turmoil.

For the action to make the desired non-sense, Peeping Tom needs them to take place within a dramatic, recognizable setting. If Kind (2019) took us to the liminal frontier of a forest, Moeder (2016) was staged as a museum. For this Dido, we find ourselves inside her chambers, a rich interior with high ceilings, matching windows, paintings on the walls, a wooden balcony reminiscent of a palace library. The piece starts in the early morning, time to wake up. Eurudike moves restlessly beneath the bedsheets, moaning as one of the servants tenderly admonishes her: “No more Purcell, madame…”.

Right off the bat, the game is set. Using another of the company’s trademark ploys, Chartier presents a fiction within a fiction and makes us all aware of the fact. The fourth wall is broken on several other occasions, and all along we see Eurudike playing Eurudike being lost in her fantasy: summoning the singers as visions, holding delirious speeches to her people, imposing herself on a servant and having him play Aeneas in bed for her pleasure. Eurudike dreading the morning, Euridike not wanting to leave the room – even when reality in the form of an avalanche of sawdust announces that the house is crumbling down upon her. She is the pole onto which all other threads, danced, sung or narrated, are randomly hooked.

Using surrealism as an overarching goal and as an excuse to explore moral boundaries on stage; treating text like choreographic matter and having the décor come to life as part of the hallucination, Peeping Tom draws our attention to what is beneath the surface of Dido’s lament.

Layers, layers, layers. Eurudike’s Dido is a despotic yet apparently illustrious ruler. This ‘all for the people, without the people’ attitude gives the character a deeper shading, and allows for a loose parallel with our neoliberal times. As for the servants, Chartier’s dancers give them a voice they never had before. One presents himself as a survivor of a war, a refugee. Another one tells us she is nameless, and that she was sold as a slave at the age of twelve. Eurudike’s response: “It is better if you do not have a name”. These hints, purposely leading us nowhere (or just deeper into the maze), are still statements that draw this stunning, hyperbolic whirlwind of a production closer to the present.