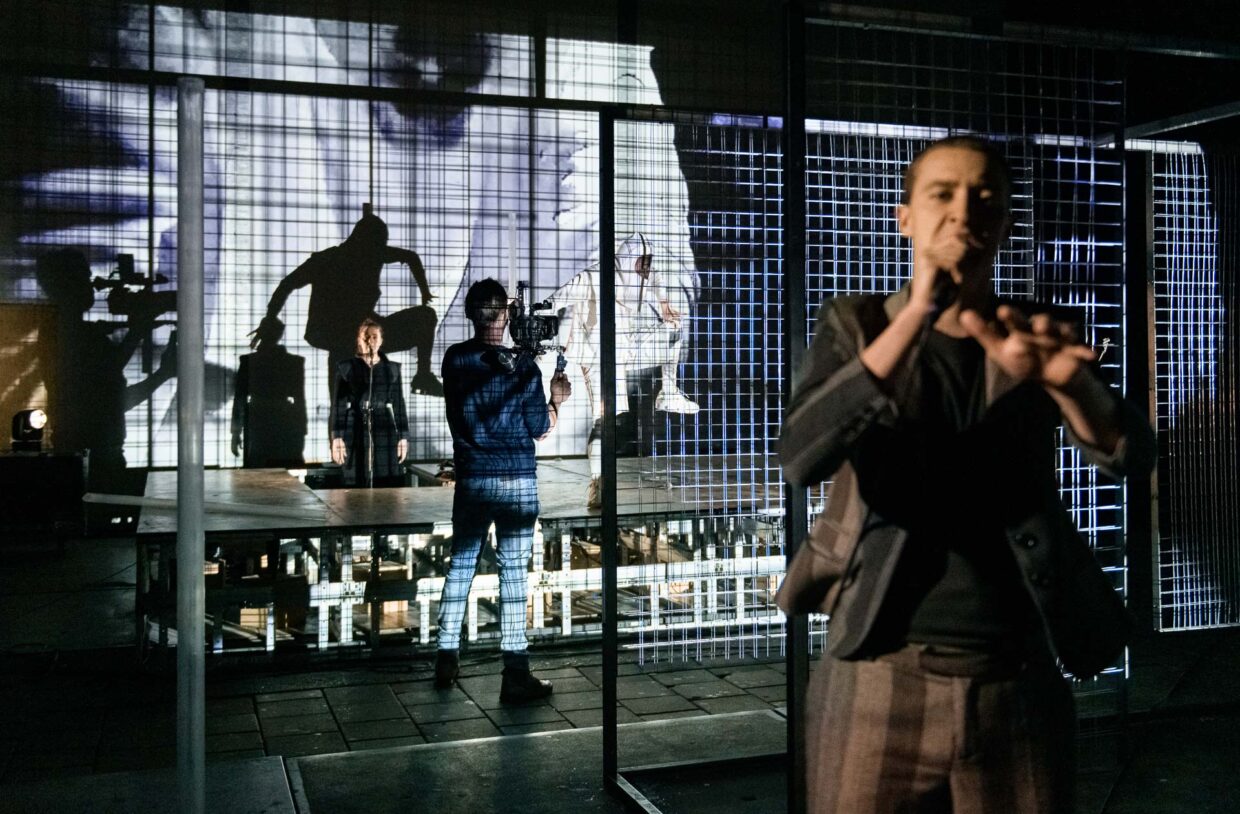 Over het IJ (Across the IJ) is an emblematic platform catering to Amsterdam’s cosmopolitanism. Linking performing arts and urban development, it supports young makers by offering them unconventional stages in gentrified neighbourhoods on the outskirts of the city (Noord, Nieuw-West). Site-specific theatre is their poetic arena, promoting hybrid forms to mirror similar entanglements between urban spaces, inhabitants and artists their devise. In addition to organizing festivals (Over het IJ Festival, Eendrachtsparkfestival), they also support individual projects such as Now, Not Now and Now, by Pim Veulings and Paul Boereboom. Streamed from the NDSM-Theatre, I saw it live and online on 18 March.

Following the instructions, I darkened the room where I watched the performance, put my screen on maximum brightness and put on my headphones. My living room and my perceptive bubble thus became as much the location of this performance as the big hangar in semi-darkness where it took place. There, two cameras and a mobile phone follow two dancers (Alberto Quirico and Gaspard Schmitt), a singer (Charlotte Dommershausen) and a spoken-word artist (Korneel Defrancq) as they move around or manipulate plastic tubes and curtains, wire panels, a wooden stage with a hole in the middle, scattered microphones and cables. Fluorescent lights, flashlights, projections and shadows plunge the lot into an overall feeling of industrial and evocative frenzy.

Scene 1: Quirico moves across a garden of vertically placed plastic tubes, followed up-close by a phone camera. A horizontal line of fluorescent light intermittently illuminates him, quickly passing by from top to bottom. How big is this plastic garden? Is he dancing on a moving platform or is this just a trompe-l’oeil enhanced by the constant tremor of the camera? While further on, Dommershausen is seen singing live, here her voice is still present only from the outside and seemingly played backwards. Questions thus arise not only about the potential of this space but also of this time. Quirico’s dancing (as moving usually entails a sense of progress, of leaving time behind) contrasts sharply with the music on rewind. Have we come to a standstill? Where am I? And when am I? Now? Not Now? Now?

Once this labyrinthine bubble is established, what develops continues to explore the possibilities of manipulating the mediums involved and, with them, our perception. The focus on the meta-aspect makes for a compelling work, as – other than in a virtual reality experience or a video-game – the dynamic images Veulings and Boerenboom design for the screen don’t so much draw you into a storytelling universe, but rather into what feels like fragments of a stretched-out and patch-worked instant instead.

In this constructivist jacket, some of the dance fragments felt a bit too affected at times, too illustrative of the struggle in Defrancq’s voice, who beautifully utters his words as if impeded by a heavy constraint on the lungs. Dommershausen’s version of Dido’s Lament resonates with sentences delivered by spoken-word artist and dancers in Italian, French and English – also speaking of endings being blurred into beginnings: “I don’t know where it is that I have to go”; “I am that woman who doesn’t know where she wants to be buried – if she wants her ashes to be put in a marmalade jar so they are more mobile”; “who do you want to resemble when they find you?”; “Falling, drifting, dancing”….

Falling, drifting, dancing. Now, Not Now and Now sets an intermedial frame for a labyrinthine and dynamic experience. To step out of it by turning on the lights of my living room felt wonderfully odd, as if pressing the fast forward button of my remote to catch up on life as it had moved on while in the dark.