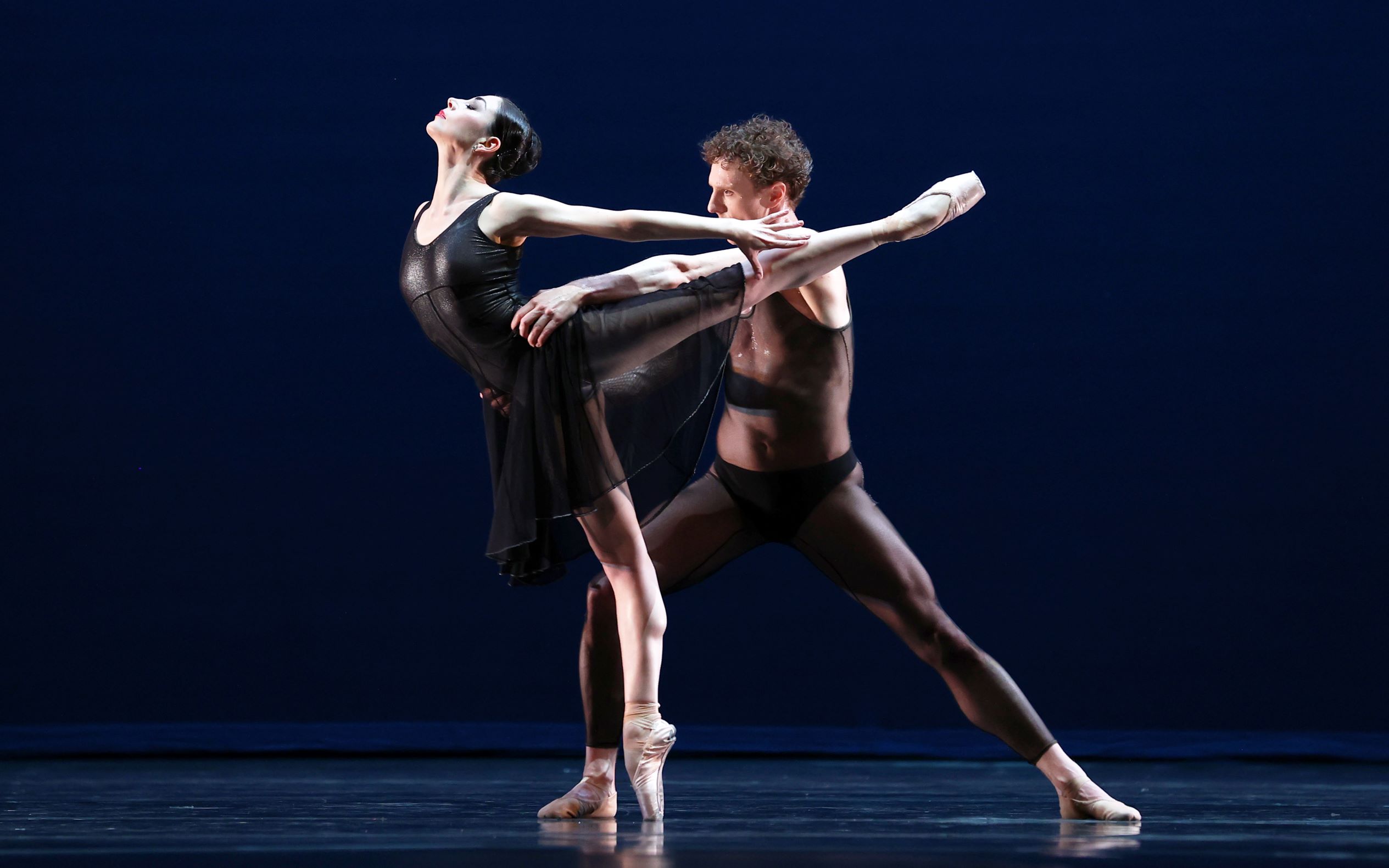 One of the goals of the Dutch National Ballet’s livestream Hans van Manen Variations, seen online February 27, was to introduce the work of Hans van Manen to new generations. Gathering six of the most emblematic ballets from his long career, it also offered longtime fans an opportunity to see these well-loved choreographies from up close. Since Van Manen is a master in the art of distilling high-percentage visual and relational tensions from his dance ingredients, the closer range of the camera presented the HNB dancers with a double-edged sword: in this format the devil was even more in the details.

It is relatively safe to say that something like a ‘Van Manen style’ exists, but there are nuances in the aforementioned tensions in every one of his ballets, tensions which have often been described by himself and others as having something to do with erotism.

Fun fact: in 1957, the exact same year Van Manen premiered his first full-length ballet (Feestgericht), the French philosopher Georges Bataille published his phenomenological essay on erotism. In it, Bataille defined erotism as an extreme and transgressive experience, one in which one can ‘lose oneself’ by crossing a line without erasing it. No erotism without taboo, no transgression without tension. No lust without the devil.

Beyond the obvious implications linking erotism with sex, this definition allows for powerful analogies with the experience of dance. It can be viewed as an invitation to a similarly transgressive experience, albeit by proxy and within a framework defined by visuality – the stage. From the viewer’s position as a voyeur, and in a possibly counter-intuitive way, Van Manen’s crystalline, structured, and often minimalist choreographies indeed reveal themselves as extremely erotic. They reveal both the significant taboo of classical dance – traditionally oscillating around an unspecified or metaphoric meaning – and the tension of trying to transgress it – stripping down every ballet to its core, heightening the feeling that that there’s only a thin veil between our perception and a final clue that will never be revealed. Within this general paradigm Van Manen plays with nuance in a myriad of ways, one of them being how close he gets to the anecdotic in every ballet, how thick or thin the veil is.

Put in more down-to-earth terms: in different ways, Van Manen always wants you to gag, to get a visual kick and gasp for air through his ‘nuclear’ approach to choreographing – a very apt label given to him by German critic Horst Koegler after the premiere of Adagio Hammerklavier in 1973.

Adagio Hammerklavier opened the livestream and was the absolute highlight of the afternoon. My-oh-my, was I happily impressed. I’ve long felt the most readily available recording of this ballet – included in the DVD issued for Van Manen’s 80th birthday – doesn’t do the piece justice, that it simply showcases a bad day; and so it is possible that this newly canned version had a greater impact on me because of that slightly sad memory.
The thing with Adagio is that it revolves around the moment between movement and stillness, as Rachel Beaujean noted during the intermission. Inspired by the outstretched way Christoph Eschenbach played Beethoven’s Sonata nr. 29 – four minutes longer than most pianists – Van Manen explores the magma of that frontier, the moment a note or a gesture has nearly died but still carries every sound that came before it while anticipating all the notes yet to come.

To explore the tension within this moment, precision is key, certainly when the six dancers move together. But precise can quickly become mechanic – even more so on screen – and moving at this tempo with the camera zooming in the smallest details become visible. Kudos, therefore, to the cast of six HNB soloists – with a special mention to Anna Ol – who transcended the flatness of the covid-imposed medium and overcame the risks it brings by impregnating every twist of the head, every grab of a leg, with just the right amount of their persona while executing the choreography in seamless unison. Without overdoing it, it really felt as though they were in the moment, there, on that stage facing an empty theatre, living the silence and the quietness – and that we were allowed to watch. Voyeurism 2.0.

Within the realm of nuances in Van Manen’s repertoire, Sarcasmen comes closest to the anecdotic. The teasing relationship between the two dancers is recognizable and funny, and builds up to that now iconic gesture where the female dancer grabs her dance partner by the crotch. A dance move, certainly, but a statement too, as with this joke Van Manen used humour to move just beyond the limits of what was politically correct to show on stage in the early eighties. Another form of tension, sexually tainted, yet choreographically and dramatically controlled. Interesting in this particular streaming was the choice of cast. Premiered by the then youngsters Beaujean and Clint Farha in 1981, on Saturday the twenty-something Floor Eimers played it against Jozef Varga, who is in his early forties now. This turned the original quarrel between two puppies into somewhat of an ironic comment on a man’s mid-life crisis. Funny nonetheless.

Three duets followed: Déja vu, Trois Gnosiennes and Two Pieces for Het. In the latter, Maia Makhateli and Remi Wörtmeyer succeeded best at the particular technical challenges within partnering that have rendered Van Manen famous. Within the expressive and relational game of tension between two characters in his duets there are physical problems to address, our gaze is guided towards particular handlings and manoeuvres, equations that require the dancers to be in it together – living the execution in deep personal synch – in order to solve them.

Finally, Variations for two couples was a good choice to close the program. Four very different musical fragments, from an andante for strings by Britten to a tango by Piazzola, encompass four different takes on Van Manen’s swinging – proving he can do fast as well as he does slow. Ana Tsygankova was the only dancer of the afternoon who performed in it a role originally made for and with her. One could read her presence as a commendable homage to all the dancers who have worked with Van Manen in the making of his works – whose generosity and willingness to give in to his proposals have rendered his style timeless. It has an ungraspable and personal essence, a moody devil that chooses to appear or stay away with every new cast.

It is interesting to see how succeeding generations of dancers at HNB continue to have that particular hang of summoning it, bearing the question if a loose and porous link unites Hans van Manen’s style and that of the company. But that’s something for another reflection. Hans van Manen Variations can be seen again online, danced by the two different casts of February 27 and 28, on March 4 and 5, respectively.