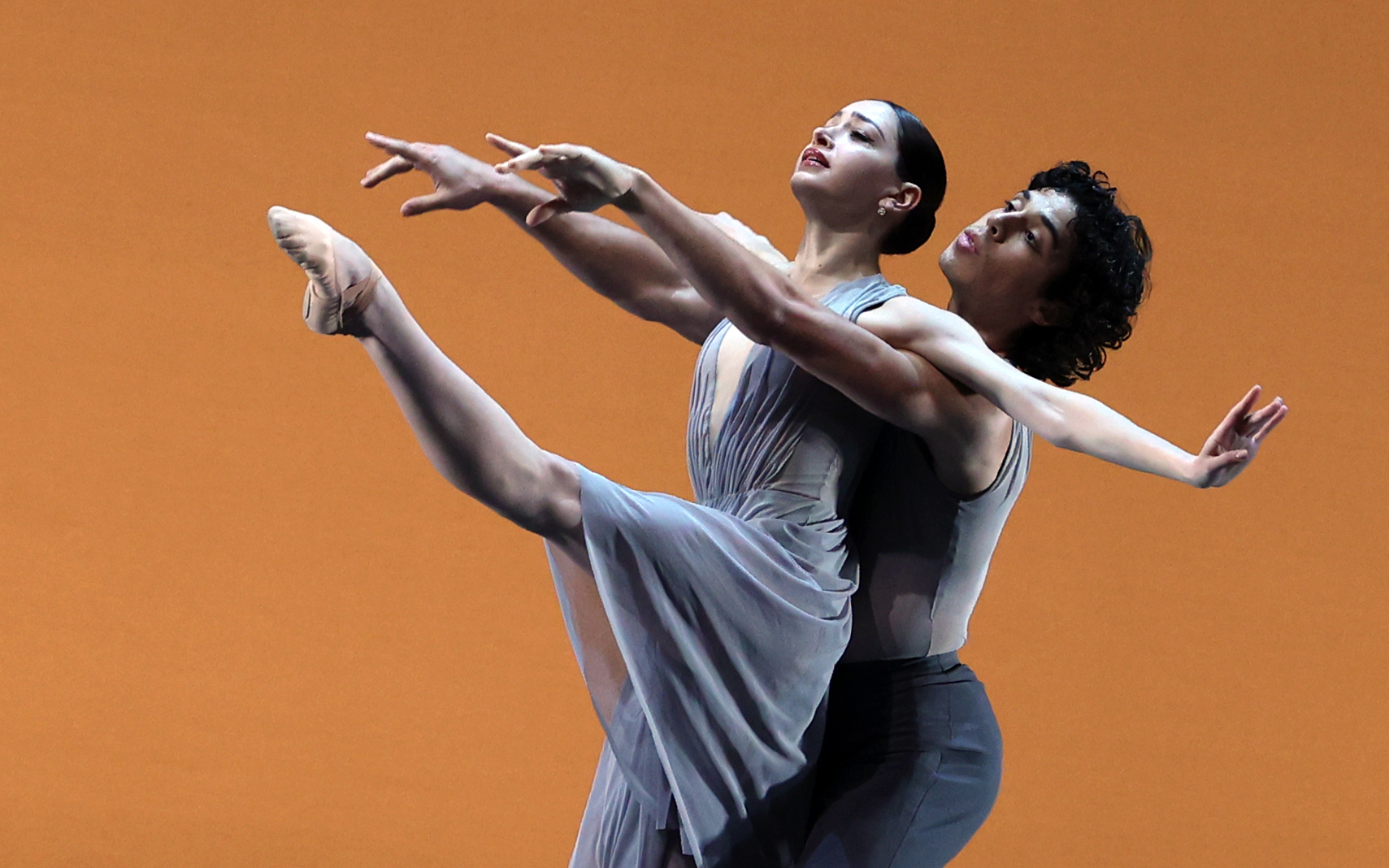 The Christmas Gala presented online by the Dutch National Ballet portrayed the company’s artistic capital both in terms of cast and its growing and diverse (neo)classical repertoire. Composed of fragments from twelve different performances, it was attended on 19 December by over 4,500 people. What follows is a chronicle dividing the programme into HNB’s three poetic strongholds: the nurturing of high standards when it comes to academic technique, the ability to embody different lines of 20th century ballet history, and the desire to continue to be part of the present by tapping into contemporary fashions in dance through new commissions.

The joy within the code
In the Netflix series The Crown, at Diana and Charles’ wedding, the Archbishop of Canterbury says: “This is what fairytales are made of”. The sentence sprang to mind watching Maia Makhateli and Young Gyu Choi in the grand pas de deux from The Nutcracker, here in the 1996 version by Toer van Schaik and Wayne Eagling. Devoid of narrative context – which in any Petipa-inherited ballet doesn’t matter much in the first place – both dancers sparkled in post-romantic grandeur. Excerpts like these remind us of what the ballet fairytale is made of: the timeless celebration of technical virtuosity, the wow factor of certain dancers’ sublime or even uncanny ability to perform the code with close-to-impossibly polished finesse. Makhateli, who was recently lauded “Dancer of the Year” by Dance Magazine, and Gyu Choi are rhapsodic in their mastery.

Another excerpt selected to celebrate the paradigm of classical ballet was Victor Gsovsky’s Grand Pas Classique (1949). Originally made as a tour-de-force for star dancers Yvettte Chauviré and Vladimir Skoeratov, it encapsulates everything balletomanes have come to love and expect, including three lengthy balances by the ballerina in passé – similar to the ones in attitude in The Sleeping Beauty’s “Adagio of the rose”. Here performed by Jessica Xuan and Jakob Feyferlik, this duet suffered greatly from excessive, Eurovision-style camera-shifting. Some forms of ballet thrive on screen by holding the same plane for more than ten seconds.

Excerpts from Modern Ballet history
“Balanchine is motion, Tudor is emotion” – this catchphrase defines the difference between Anthony Tudor and George Balanchine when approaching 1930s modernist ballet. In the Netherlands a similar divide can be drawn between Hans van Manen and Rudi van Dantzig. The latter’s wish to underscore his characters’ psychological narratives made him a master in the art of fusing ballet with emotionally loaded gestures such as a kiss, a caress, or a hug. This is uber-visible in his Romeo and Juliet (1967), represented in this gala with its famous balcony pas de deux.

Alongside John Cranko’s duet from Onegin (1965), these two metonymic fragments allowed us to revel in the memory of the storytelling ballets they stem from. In both cases, the lack of context highlighted both the choreographic savvy of their makers in soaking ballet movements with drama, and the individual savvy of some stars within the company when it comes to portraying this particular blend. Anna Ol deserves a special mention as, besides a very convincing Tatiana in Onegin, she shone in equal measure in the premiere of David Dawson’s Metamorphoses I. As for the other line of modern-ballet tradition, the gala opened with several fragments from Balanchine’s Gershwin Americana-elegy Who Cares? (1970), and Van Manen was present through the iconic male solo from 5 Tango’s (1977) and the full performance of Solo, premiered by NDT twenty years later. While in this extensive programme, the short tango came across as a mere divertimento between two longer fragments, Solo was allowed to shine in full. The piece remains quintessentially Van Manen, pairing the love of the ballet vocabulary he shares with Balanchine with the ability to tap into the performers’ personal, openly erotic pleasure in their own dancing. The three dancers sharing Solo on this occasion didn’t disappoint, living it up to the notes of Bach’s violin partita.

From the perspective of cultural heritage, the way in which HNB dancers perform both strains of modern, 20th century repertoire could – should – be placed alongside the objects stored in the vaults of the Stedelijk Museum. Tricky as this idea may be, the company – the European champion when it comes to Balanchine works and host to over two-thirds of van Manen’s oeuvre – is undeniably the Dutch safekeeper of this certain something that is as unique as it is impossible to define in full.

New Romanticism
The more contemporary works this evening – including two world premieres, by David Dawson and recently appointed Young Creative Associate Wubkje Kuindersma – tapped into a generalized tendency towards a new form of Romanticism. Aiming at awakening intense, musically led, visual experiences, both premieres exploit the emotional mood of a given melody while drawing on poetic metaphors to appeal to the viewers’ imagination. Kuindersma’s Echoes of Tomorrow centres on the idea that the present time carries the weight of both past and future events. David Dawson’s Metamorphosis I was tailor-made, via Zoom (with dancers Anna Ol and James Stout), to fit Philip Glass’ eponymous piano composition. It is described as a search for moments of light in times of darkness: a piece about hope.

Kuindersma’s Echoes of Tomorrow deserves a paragraph of its own, and so do her dancers. The chemistry between grand sujets Salome Leverashvili and Timothy van Poucke is off the charts, and the choreography seems to have been devised to feed off the golden link between the two. Last year, Leverashvili and Van Poucke, who have been dancing together since their time in HNB’s Junior Company, already proved a couple to be closely followed in their rendition of Van Manen’s Sarcasmen, performed during the dance-lecture-programme Dancing and the Brain. As for Echoes of Tomorrow, it intercuts everyday gestures with long, swift movement lines gliding across the floor, slightly reminiscent of Mats Ek’s style. A feast of abstract relational storytelling. The devil being in the details, the subtle yet wilfully focused instant where Leverasvhili rests her hand on Van Poucke’s leg to support a high lift á la seconde was a highlight of the evening, in and of itself. A moment of fantasmata – to quote Renaissance ballet-master Domenico da Piacenza – in which the entire choreography seemed to gather, and time stood still.

Shadows of streaming
While the evening counted several such illuminated moments, some shadows were cast on the whole by poor choices made in manoeuvering the specificity of the covid-imposed format of the online performance.

First: the lack of intermissions. The merciless succession of fragments was only divided by three brief interviews with dancers by hostess Milouska Meulens. The programme is a lot to take in, even more so on screen, and even more so because it is so fragmented. A bit of air to savour what we just saw and look forward to what comes next would have been welcome. Perhaps the organisation wanted to give viewers the liberty to press pause, but to me this felt like killing the magic. So I didn’t.

In addition to a sense of liveness, one of the potentials of streaming is the ability to enhance the images through camera-production. Three shots – a general stage wide, a closer plane capturing dancers’ full bodies and a short-range shot delivering facial expressions and some occasional footwork – were combined to encapsulate the action. But while the TV-rhythm of quick shifts between the three worked well in some of the more cinematographic fragments, it failed to understand the point of others. Cutting to facial expression in the midst of a series of pirouettes doesn’t help the dancer, nor does it do justice to the event.

Finally: the bowing. As is known, the protocol by which dancers receive applause in big ballet companies is part of convention. But the protocol only makes sense if there is an audience to offer an applause. By stubbornly sticking to convention, every piece of this mosaic regrettably ended in awkwardness. To look at the dancers trying to keep it cool while bowing in front of an empty hall was painful, the distance unsurmountable, and the uncanny silence palpable both on screen and in my living room.

Did this silence – plus the failure to mention the names of the AV-crew in the credits – point at a lack of understanding of this medium’s specificity, or was it a conscious statement? I, for one, was only reminded of the exchange that was not taking place, no matter how closely the camera’s zoomed in on the dancers.

Aside from better pacing and a tighter conversation with the AV-crew to guide the streaming from a dance-specific viewpoint, the gala, overall, fully delivered as a display of balletic power, with Wubkje Kuindersma – the only choreographer who shared in the awkward bowing – as the bearer of the evening’s warmest Christmas gift.