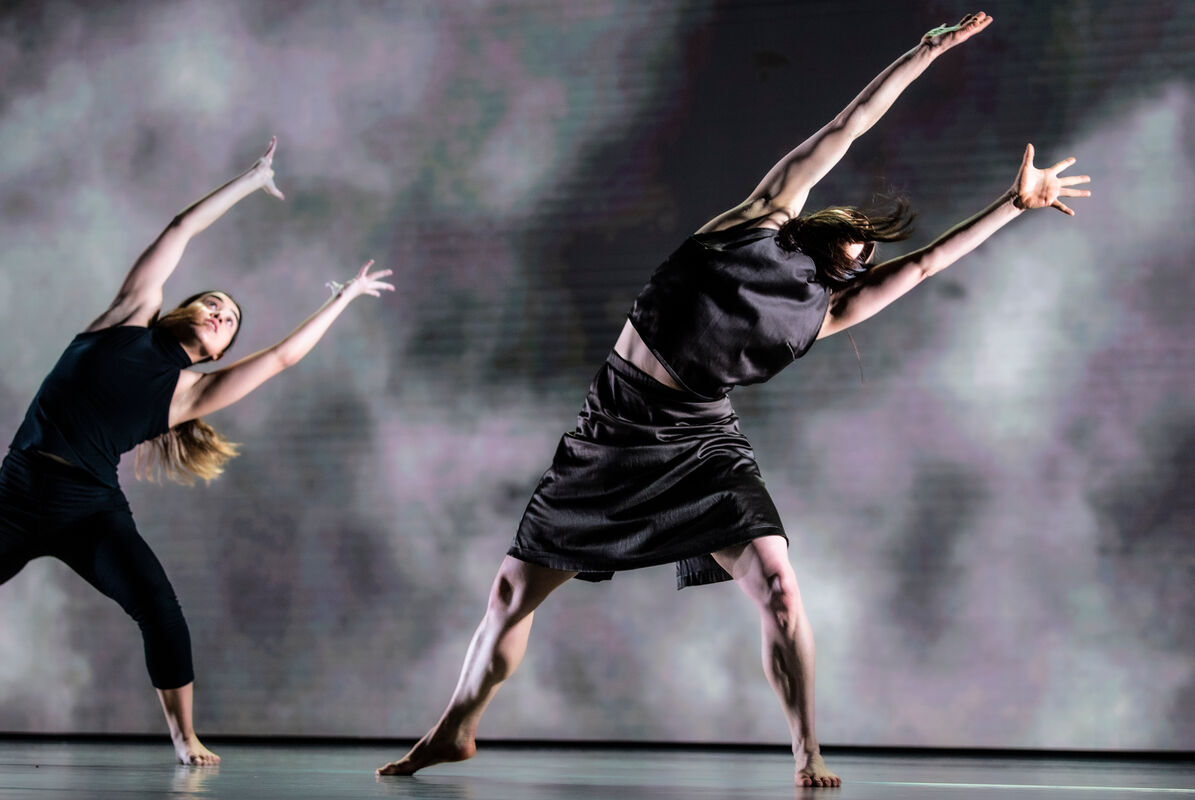 Twelve characters dance their story in front of an impressive, stage-wide LED screen portraying images of a city – their city, Rotterdam. Framed Online, Conny Janssen Danst’s one-hour dance film (made as a surrogate until the live version can be seen on stage), is an abstract urban portrait with the look and feel of a cinematic blockbuster. The covid-defined rehearsal process (where working together as a group was not an option) has resulted in an underscore to the paradoxical sense of ‘loneliness within the crowd’ that has always defined city life – a sense ever more present in the times we live in. Seen on 24 March, this 2.0 version of Framed goes on ‘digital tour’ from 1 April.

After opening with the dancers standing in shadows on stage, looking at a screened image of Rotterdam’s wide waters, our eye is swiftly sucked into the view as the recording transitions to a series of scenes previously shot on location. On an allegro from Vivaldi’s Europa Galante concertos, these offer a first impression of the characters as they uneasily pose, walk, run or wait at a bus stop in town. Once back into the theatre, and with the music changing to an electronic soundscape by Michel Banabila & Oene van Geel, the dance begins. The sudden natural ease with which they perform themselves while dancing is remarkable by contrast, and endearing to watch.

In terms of structure, Framed Online consists of several solos and duets intertwined with collective fragments danced in sync. Frontal and avoiding physical contact, these ‘dance-class-facing-mirror’-segments become loaded with meaning in the current context. During the first of these moments, the sense of tensile distance is strongly enhanced as the dancers perform Janssens recognizable physical idiom in a calm and controlled manner. Not too many movements, nor performed too swiftly, travelling in time one movement phrase at the time: the dancers are clearly and consciously dancing together, apart.

As for the characters, they come and they go, they enter and exit, they pass by and they dance. Thanks to the camera close-ups we see them perform their unspoken stories, portraying expressions ranging from worry to nostalgia to boredom to hope – emotions that read differently through the body of an eighteen-year old or a pregnant woman in her late thirties. Loose and different threads in an invisible maze, composed into an abstract yet singular ‘view on the city’ – as promised by the piece’s subtitle. As a rich playlist guides us through, unity is achieved thanks to the choreography for the camera designed by former Janssen-dancer Davide Bellota, the magnificent visual design by Thomas Rupert – elegantly transitioning from urban scenery to digital patterns of light – and an evenly well-achieved stage-light design by Remco van Wely.

Conny Janssen is known to work with a tight team of stable collaborators. It is certainly commendable to see how the company invests the resources at its disposal to cultivate and sustain long creative partnerships, both with the dancers and with the rest of the crew. A potential for poetic depth that is sadly becoming an exception in the dance field. In Framed Online the result of this joint effort is a high-quality dance movie in which the commitment of all agents transcends the screen. Its concept, however, is not strong enough to hold. As captivating as looking at city life might be – trying to ascertain what story hides behind every walking, breathing being – it just doesn’t work the same way for dance on screen. After a while, the succession of intimate fragments leading us nowhere starts to pile up and becomes pointless, as if seen peeping swiftly through windows while we rush home before the curfew.