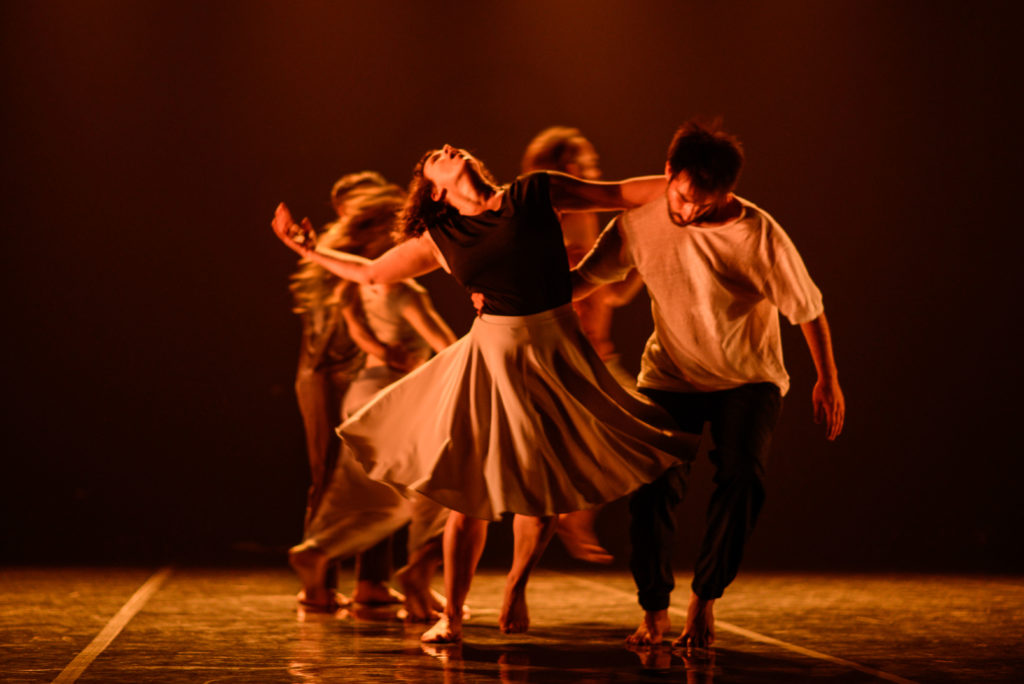 Who said math was boring?

This edition of ITA-Amsterdam’s Brandhaarden Festival circles around theater and dance from southern Europe. It opened Tuesday with the ecstatic Gran Bolero by Jesús Rubio Gamo.

A calculated form of ecstasy, that is. In an attempt to mirror the effect of Maurice Ravel’s famous musical crescendo, Rubio Gamo’s Bolero travels from a very precise and transparently calculated structure to a grandiose outburst of energy.

Sound-wise, the first minutes of José Pablo Polo’s musical arrangement certainly played with the expectations of many. After hitting our ears with a fast-fired series of thudding sounds – an electronic replica of the Bolero’s classical drum-base on turbo, maybe – twelve dancers join one by one in a continuous, circular walk around the space. The electronic thudding slows down and marks their pacing: thump, thump, thump… As a flock of birds, the group’s pace begins to quicken as they play with the rhythm and the size of their steps in seamlessly effortless, hypnotic synchronicity. All the while, they change the center of their circle every time one or two dancers burst free to construct small phrases. Stretching the tempo with her limbs, Natalia Fernades stands still and reaches for the sky with one arm as she slowly bends her body forward. Clara Pampyn spirals around herself, embodying an echo of the line the group draws around her. Someone falls, rolls over and is picked up by the foule again.

If, as a starting point, their consistent marching soothes the eye of the beholder, its crescendo accounts for an existential tension sparked by the counts. As if Rubio Gamo wants us to be aware of the puzzle, the dancers shout some of the numbers out loud: “Uno!” “Quatre!” “Nou!” “Once!”. Some phrases reappear and become familiar, and new, more intricate combinations are expelled from the circular flow. Spiraling lifts, elevations, dragging of bodies over the floor. Heavy stuff. Mesmerizing stuff. No exiting the stage, no stepping out of the light, no real break or moment of silence. Thump, thump, thump… step, step step… Fifty minutes. Who said math was boring?

As the dancers start showing signs of attrition, a hint of Ravel’s melody appears, then another, until it takes over in full glory towards the end. This emotionally invigorating anchor accompanies an overall transition towards a different kind of dramatic tension, one that is carried not by precision but by actual exhaustion – and by the way each dancer deals with it.

One of the founding myths of modern dance in the early 20th century was seeing the dancing body as a physical instrument for interior subjectivity. Using an apparently opposite strategy – cold-blooded choreographic composition – Rubio Gamo pushes his dancers beyond the form. They gradually take their clothes off, they gasp for air, they cry out, they sing as if their life depended on it. Acts of design, sure, and some of them indeed feel overacted or needlessly stretched – like the distracting full nakedness of some. But still: the sweat is real, we are witnesses to an infectious process of liberation through choreographic restriction. The long and heartfelt standing ovation indicates that the dancer’s sacrifice, like the blood of a scapegoat in an ancient offering, was not in vain.

Final thought: the power of the foule, as Edith Piaf would sing it, can be both invigorating and frightful. In the organized dance-madness of this Bolero, every dancer has the opportunity to exorcise a loaded experience of time thanks to the energy of the group. Gran Bolero is a co production by El Mercat de les Flors (Barcelona) and Teatros del Canal (Madrid). This fact imposed a choice of cast that had to combine dancers based in both cities in a politically sensitive time, with the Catalan-Spanish political conflict dominating the news. Even if the piece doesn’t need a political translation, some premeditated choices (both Catalan and Spanish language are used to count, for example) allow for it nonetheless. Certainly in Spain, this Bolero could be read as a celebration of human bonds beyond a flag, and received as an opportunity – for audience and dancers alike – to wordlessly purge amassed frustrations, exceeding the loaded time of the performance alone.