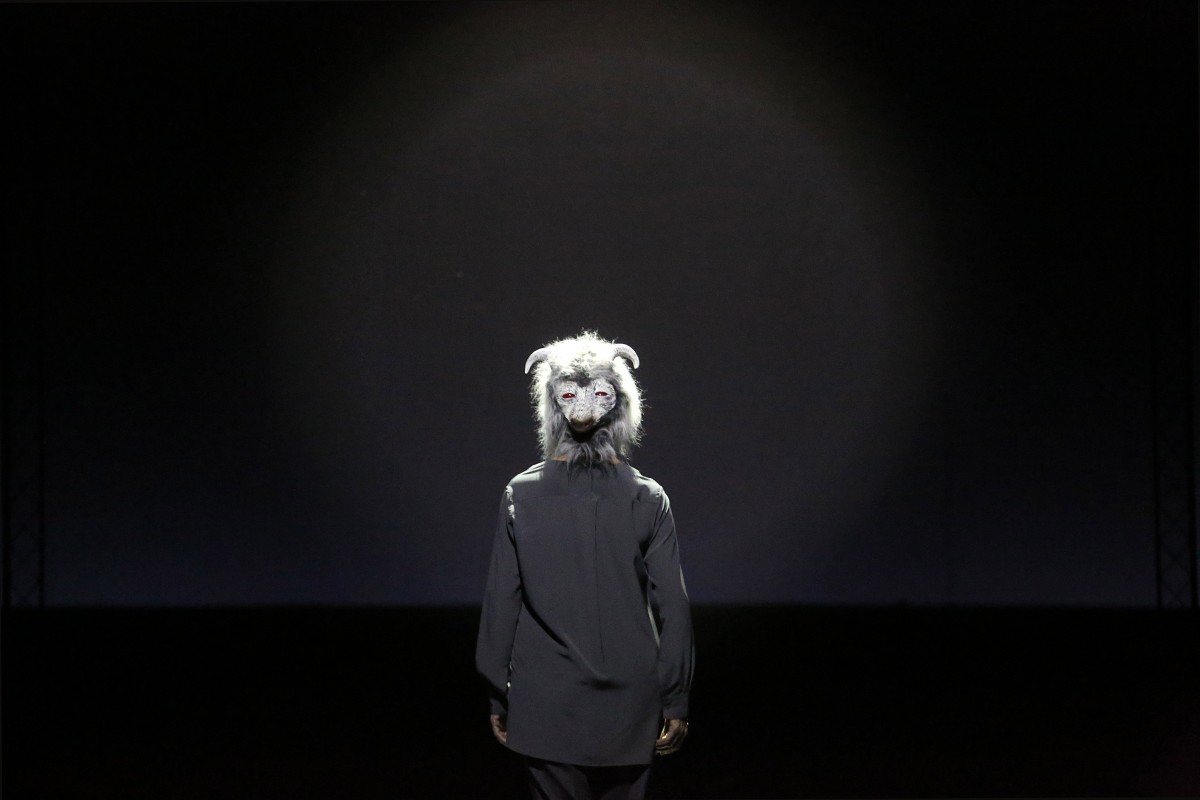 On dancing images, metaphors, and the unapologetic use of representation to imagine a better world

DIDO/DIDO (2017) starts with the calm observation of an image. A painting of a wild seafront hangs mid-stage, bathing in light. We are given the time to look at it properly, in silence, allowing it to gradually come to life: now the eye sees a ripple on the sand, then the depiction of the foam on the waves that had gone unnoticed at first. As the lights illuminating the image subtly change in intensity, we breathe with the painting in what feels like a meditation exercise to land in its here and now. Premiered in 2017 and made in collaboration with Silbersee and Ulrike Quade Company, the quasi-energetic introduction of DIDO/DIDO is in itself a testament to Nicole Beutler’s idiosyncratic approach to stage performance.

Born in Munich in 1969, she moved to Amsterdam to enroll in the School for New Dance Development (SNDO) after finishing degrees in literature and visual arts in her home country, and never left. Today, she is a relevant player in the Dutch performing arts scene, thanks not only to the works produced with her own company – celebrating its tenth anniversary this year – but also to her active contribution to strengthening the field. She is one of the main forces behind the interprofessional BAU platform, and together with Keren Levi she produces Come Together, a yearly gathering at Frascati that is both an opportunity for local performers in all stages of their careers to show work in the making and a weekend to meet and exchange amongst peers. The aim is to temper the natural competitive tendency within the performing arts bubble, where everyone is fighting for a spot in a precarious context. Her political activism and preparedness to take responsibility reveal a strong sense of engagement to her context, a wish to contribute that is also felt in all of her works. She defines herself as an idealist, and a bird’s-eye view upon Beutler’s career reveals an almost programmatic use of dance as a means for change.

What does this look like? What is Beutler’s work made of, and how is it presented to an audience to obtain its desired effect? Her choices in education hint at a three-pronged fascination: narrativity, imagery and the body. The first two can be regarded as a positioning, a prism for looking at the third. Within the tradition of western contemporary dance, and in the aftermath of the bloodless, conceptual 1990’s – when the aim to undermine any form of narrative or representation was still the way to go – Beutler is part of a generation of choreographers who found a way back to the body as a metaphor. Nicole Beutler doesn’t eschew representation. On the contrary, she unapologetically composes immersive and polished poetic universes with the deliberate aim to lure in her spectator. Good old Gesamtkunstwerks, but for the 21st century.

Working in tandem with long-term collaborators like composer Gary Shepherd and lighting designer Minna Tiikkainen, Beutler has developed a personal method over the years to translate her fascinations into form. It starts with a question or a theme, which is followed by a research phase to gather a multi-layered bundle of references, from texts to images to essays to materials to paintings to songs, piling up to become a particular, poetic framework. Within it, images start to appear, a number and a type of people to cast, a first inspiration for stage design, lighting, music, costumes. Creative strategies, exercises and the way to approach the work in the studio also come out of this research-based magma.

In 7: Triple Moon, for example, Beutler took the triangular form as a trigger and, tuning it upside down, she deepened into its powerful, feminine symbolism. Similar to DIDO/DIDO, Triple Moon begins with a moment of ritualistic quietness, as the audience enters the room and is given the time to take in the misty white circle projected in the midst of an otherwise blackened stage. Nothing more archetypically feminine than the moon, and with it, the powerful and magical hours of the night. The performance triangulates around three women of three different generations, performing one solo each. Three mythical, female deities are physically explored, but instead of playing the goddesses, the dancers play themselves, infused with the elements of their symbolism. Their voices are heard at several points, reciting texts that came out of a dream-writing workshop that Beutler organised during rehearsals.

Several bridges are drawn here. Beutler transcends the collective myth around womanhood by superimposing three very personal, female and present narratives – physical, textual – over it. The handout that accompanies the piece also refers to an analogy between the nocturnal and the theatrical time-and-space, both defined by darkness and loaded with ritualistic potential: “[The moon’s] waxing and waning includes a pause, the phase of the new moon. […] A darkness that holds the unknown, the unseeable, the obscure. A darkness where things merge, change, become enchanted, possessed, released, renewed. A time that creates space. Here I found my inspiration”.

Nicole Beutler’s handouts – booklets filled with images, texts and other references, a part of her scrapbook – reinforce her proclivity for representation. She insists: what you see and hear has been done in a certain way and with a certain purpose. If the goal was to enrich our perspective on a given subject, the clarification of dito subject and the elements used to approach it are beneficial. Or at least, it seems clear Nicole Beutler sees it that way. As overly pedagogic and slightly control-freakish as her booklets may seem, this transparency can also be read as a benevolent and open invitation with an underlying thought: that, once informed of her terms, our experience of the work will still be very much ours to process.

Among the images in the booklet for Triple Moon were pictures of three pioneers of modern dance: Isadora Duncan, Mary Wigman, and Bronislava Nijinska. One of the sources of inspiration for 3: The Garden was Monte Veritá, a utopian artistic community of the 1910-20’s in Switzerland. In 5: ECHO, the research on the circular form brought Beutler to delve into the ways of Dutch postmodern choreographers such as Koert Stuyf and Bianca van Dillen. The fascination around the dancing body and her tendency to look back in order to present something that looks forward, has turned Nicole Beutler into a referential choreographer when it comes to reenactment.

To work on the body as a living and changing archive, able to sift through formal heritage, bodily memory or traditional backgrounds to see what is left to serve us in the understanding of ourselves – or to propose a new perspective on things of old – is a path that is walked and danced by many today. From Alain Platel’s Out of Context – for Pina (2010) to Pere Faura’s Sweet Fever (2016), from Eszther Salamon to Dada Masilo, to Daniel Linehan or Anne Therèse de Keersmaecker, who has turned the revisitation and restaging of her own repertoire almost into a method, put into practise in programs such as Bartòk-Beethoven-Schönberg, presented in 2019.

In Dialogues with Lucinda (2010), perhaps Beutler’s most openly dance-historical reenactment exercise, she passed the poetic principles of mother-of-minimal Lucinda Childs through her lens. When it was shown in Barcelona in 2014, dance theoretician Roberto Fratini wrote: “Beutler’s work is not just a reappropriation of Childs; it is the deepening of a poetic path that Childs envisioned, and that consisted of putting a dance made out of repetitions in a position to repeat itself, to see itself as in a mirror (to speculate, therefore, on its own mirror image) and from there, even, to grin. (…) In Lucinda and Nicole’s de-synchronized or anachronistic reflection there is but the common ability to let the form count and tell its own infinite myth”.

The form telling its own, infinite myth. To celebrate her 10th anniversary, one of the pieces Nicole Beutler brought back was The Exact Position of Things, premiered for the first time in 2005 and touring the Netherlands again in 2020. In this piece, which, according to Beutler, was when she found her signature as a maker, the overarching theme was ideally fitting. Inspired by a documentary about a woman with Alzheimer’s disease, two performers shuffle around the stage, dance without a reason, fold a carpet just because, and engage in absurd conversations, the two of them voicing a single mind speaking to itself in the void. Beutler presents the piece as “an ode to a disappearing mind”. An ode that, even if it doesn’t eschew the very literal and frightful impression of a woman’s brain in decay, also celebrates the freedom and tender beauty of nonsense. Because the absurd enhances the present. In her aim to build bubbles made to be visually entered by the spectator, this may be a final underlining of her poetics.

At times from a more formal perspective (2: Dialogues with Lucinda, 4: Still Life, 5: Echo), at others with a more dramatic approach (7: Triple Moon, 8: Metamorphoses, 3: The Garden), Beutler uses the ability of the form to tell itself, in itself, infinitely, to her advantage. Worked to be playful, often ironic, and always iconic and relatable, Beutler’s pieces allow the intrinsically nonsensical moving body to open up a space in a time: that time. Celebrating the essence of theatrical practice as a shared moment, Beutler the activist wants us to engage with her work and train ourselves in the practice of revisiting our known perspectives. After all, paraphrasing Nuccio Ordine, it is in the re-imagination of things that we might, eventually, be able to think of a better world.