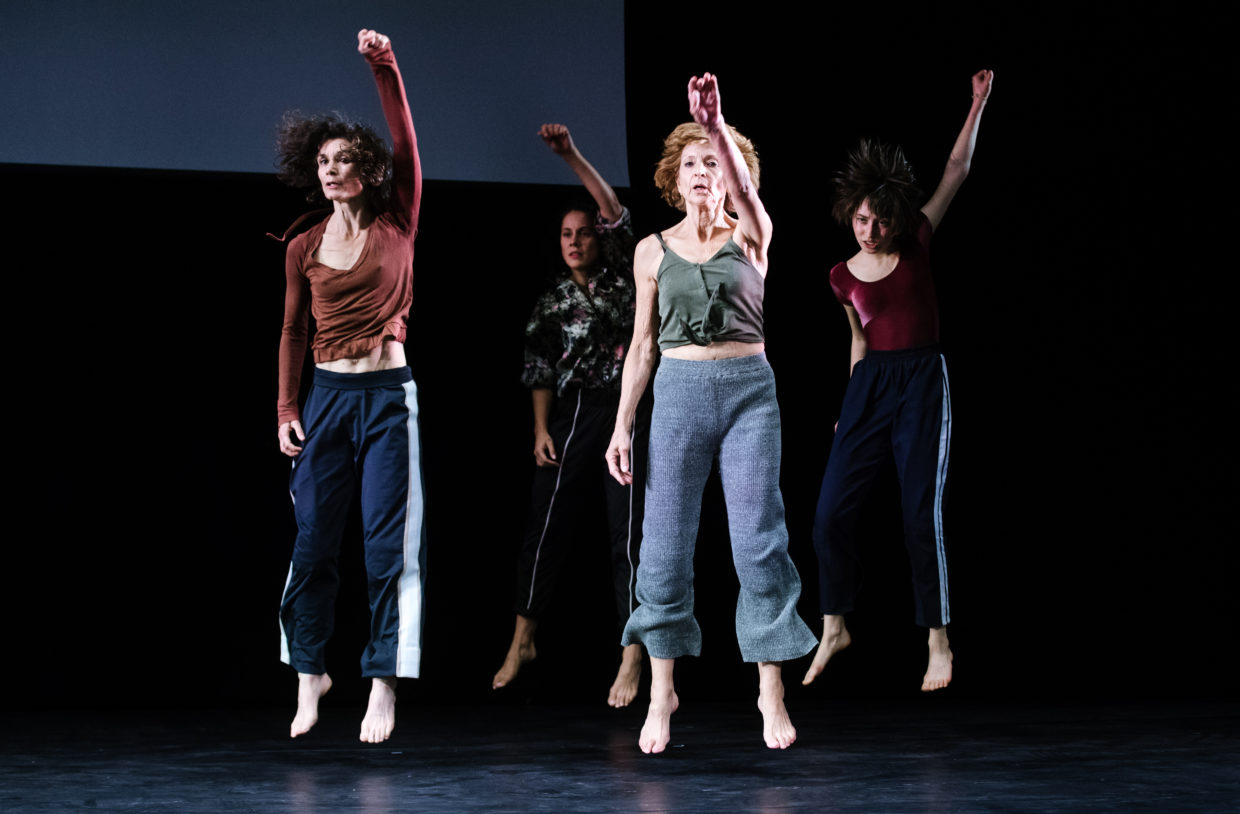 This reviewer only managed to see a couple of shows during the rich and diverse 2nd edition of the What You See Festival, celebrated in Utrecht from 22–24 November. Diverse in its core – the main focus lying on the topics of (gender and sexual) identities – but also diverse in poetic approaches to the themes at hand. Whereas in Graces, Silvia Gribaudi attempted to shift our perspective on beauty through laughter, Aquí, Siempre by Poliana Lima opened the evening of the 23rd at Theater Kikker with a more reflective approach, leaning towards a documentary-like exercise that showcases the bodily history of four female performers of different ages.

Four women are standing at the back of the stage, dressed in rehearsal clothes and with their eyes closed. There is an age difference of at least 40 years between the eldest and the youngest. Their bodies, placed alongside each other, immediately put the notion of presence under duress. Because next to their being there, individually present, in between them is the vivid shimmer of the notions of future and past, as happens when you look at a family portrait and memory, present sensation and projection gather unavoidably in a single moment.

Each in their own way, they start to tremble, finding an inner tremor in their core that slowly grows to affect torso, pelvis, shoulders, head. The four bodies are activated and their presence on stage lights up as they open their eyes and engage in several actions and movement phrases. For example: repeatedly falling on knees and hands to then swiftly recover to standing position. When performed in duets or an all-four unisono, this action showcases their technical ability, and it is interesting to see how each body deals differently with the energy and resources needed to actually get it done in time. Especially enigmatic in her performance is Christine (52), who with her flexibility and silent strength command everyone’s attention in the room every time she moves. Slightly aloof yet utterly present, precise yet soft in her execution… moving intuitively, yet always in control. If bodily archives lay at the base of this performance, hers reminded me of a technical way of dancing which is seen less and less on stages nowadays. A delight.

In the second part, a sonic collage dresses the movement combinations and accentuates the documentary aspect of the work. Roughly edited snippets of rehearsal conversations, the voice of Poliana Lima proposing ideas or expressing doubts along the way, read-out fragments of the first email Mona (68) sent when she was invited to be part of the project, a poem written by Irene (16) – “I am mercy, and it’s not fair, because under my fingernails there is still grit from the playgrounds” – and the song Alfonsina y el mar, which speaks of the life and death of poetess Alfonsina Storni, here sung live by the fourth dancer, Carla (20).

“When I dance I don’t feel my age”, we hear Irene quote Christine. Shortly after, the young dancer takes to the stage alone, in an expressive solo involving lots of stamping feet on the floor, set to a Patty Smith song. Again, different times are brought together in a hypnotic moment of wonder.

Aquí, Siempre touches on a powerful and enigmatic aspect of dance: its ability to suspend time by spiralling around meaning. Their series of encounters over time are the piece. A purposeless, choreographic map of the materials that came out of these is the result. As one of the audience members said in the after-talk led by the self-proclaimed dance-activist Peggy Olislaegers, “it had a prayer-like structure”, one where it didn’t matter if you were familiar with the religion it belonged to or not, as you could withdraw and get lost in it either way.