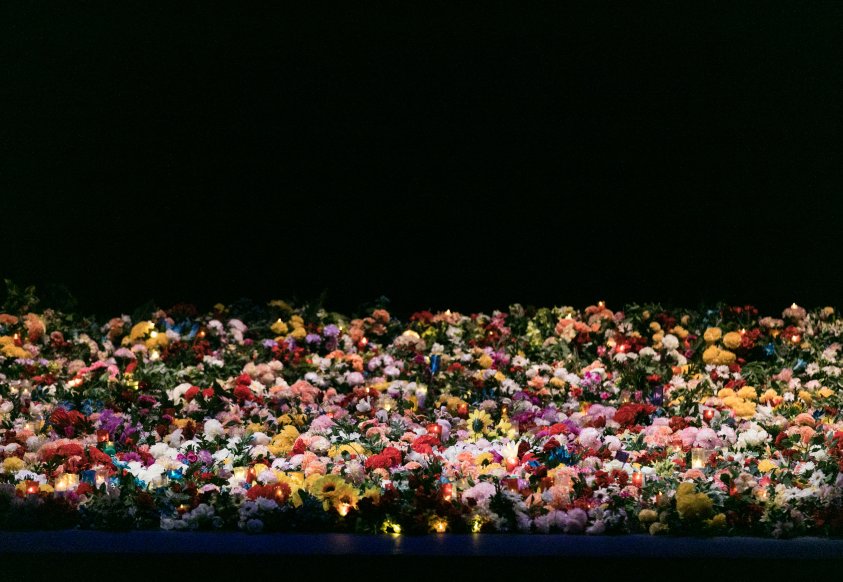 Scattered applause. The cold reaction to La Plaza, performed on Tuesday 4 February at International Theatre Amsterdam during the Brandhaarden Festival, was significant. Agreed: the latest piece by Barcelona-based company El Conde de Torrefiel was a tough cookie, especially because with their teatro raro (weird theatre) they challenge the biggest convention of theatre practice: that a given representation can be something – can mean something – by itself, without the audience’s active engagement. We were asked to work. Apparently, not everyone went to ITA willing to do that.

An enigmatic soundscape places us in an imaginary and slightly futuristic cave. A dripping sound, an electronic rumble in the background. On stage, an immense, square bed of flowers with scattered candles here and there. A memorial of sorts. Who died here? What died here?

Words appear projected on the backdrop, telling us this, like everything else in the world, is just an image. The words written by the makers, Tanya Beyeler and Pablo Gisbert, invite us to come along on an imaginary journey, one in which this image – the flower memorial – has been on display for a full year, in this theatre and in 365 other theatres in the world. Today, in this imaginary tale, the performance comes to an end. The curtain falls.

In the scenes that follow, the projected words invite us further into a proposed process of thought. This process takes place on imaginary streets, as we walk towards an imaginary home. We put our headphones on, the words say “imagine you put your headphones on, turn on Spotify, and that song you like because it has no clear beginning starts sounding” and as we listen, we see this world, this life that was out there all along, like in a videoclip. As scenes, encounters, memories, feelings and experiences are described, thoughts pile up: existential, banal, philosophical, ethical.

Meanwhile, on stage, the curtain has risen again to reveal a group of performers moving slowly, all looking like mannequins thanks to flesh-coloured stockings covering their faces – a quintessential symbol of something that is on display. Slowly moving, they present a chain of tableaux vivants, not necessarily correlating to the projected words but close enough to allow for a link between the two. It is an act of dramaturgic brilliance, as in this gap, our private thoughts have an opportunity to engage in a process of their own.

The words and images proposed by El Conde de Torrefiel are polemic. As we look at a peaceful marketplace crowded by lower-middleclass Muslim women (a meaning I gave, a meaning I read in the headscarves and objects they were wearing), the words speak of a group of Muslim men, and of the feeling that this group could resemble any other group of Muslim men in any other city in Europe. And of how – following that thread, and the news – it wouldn’t be far-fetched to assume the next genocide will be of Muslim people. “Violence begins with the lack of imagination”. Thanks to the stockings, the women in the market did all look the same.

Maybe, rather than a process of thought, La Plaza – as much a theatre performance built on choreographic principles as an audiovisual installation – presents us with the notion of thought as a process. And there the work begins. Because if we think of thought as a way of acting – on reality, on ourselves, etc. – the assumed passive role of being an audience member (and a citizen) disappears. No escaping in the comfort of our seats. We are here. We think. We ascribe meaning based on “fragments of feelings and thoughts of the past”, as the projected words suggest. We act. Our thoughts are the performance. And they are our responsibility, too.

Sailing on the winds of current aesthetic, philosophical and neuroscientific discourses about how we know what we know and how reality – and with it, history – is modified by our bodily perception, Beyeler and Gisbert offer a stunning dramaturgical framework. Intellectually steep, choreographically clever, well-paced thanks to the suspense-building soundscore designed by Adolfo Fernández. An opportunity to reflect on the mechanisms of meaning-making. A challenge to the notion that there is something like a simple truth.

Another sentence that stood out: “It’s all so weird”. My point exactly.