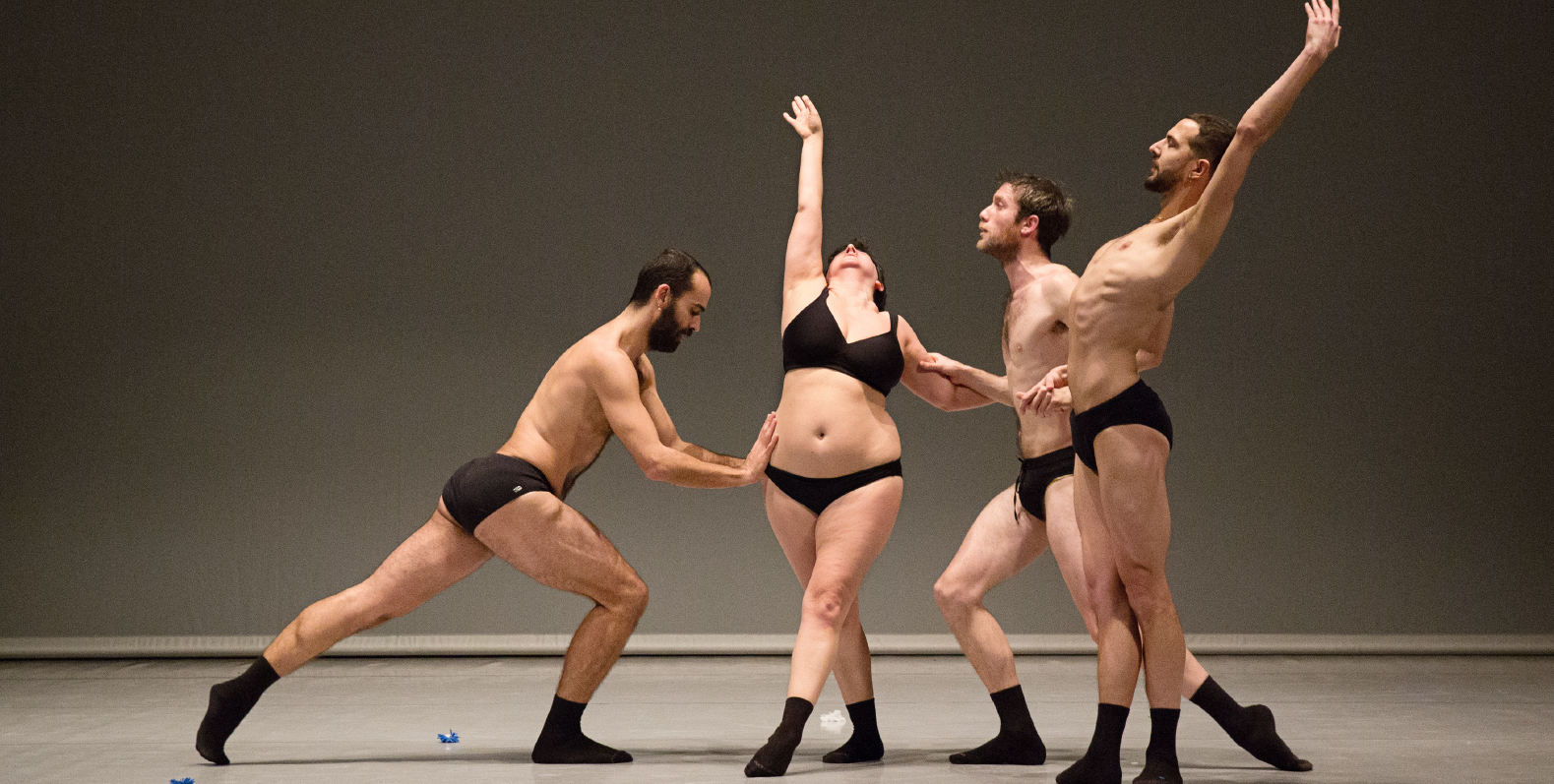 The What You See Festival celebrated its second edition from 22–24 November in Utrecht. This festival – still humble in means, yet rich and ambitious in its programming – circles around an increasingly crucial theme in current debate: the matter of gender and (sexual) identity. Silvia Gribaudi’s Graces, seen on the opening night of the festival at Theater Kikker in Utrecht, is an homage to the poetic powers of imperfection.

Canonical notions of bodily beauty, also of grace as a thing, as an ideal, are here wittily questioned within the framework of a conventional theatrical experience, side-curtains and all. In the otherwise bare stage of the very postdramatic Kikker, these curtains immediately feel at odds with the place when the audience enters, the more accustomed viewer raising an eye-brow in slight contempt.

Together with three male dancers with clearly trained bodies and dressed in tight black shorts, Gribaudi herself – two heads shorter, potbellied, dressed in an equally black body-swimsuit – orchestrates a conventional mockery on those canons, taking as a starting point the neoclassical sculpture “The Three Graces” by Antonio Canova, here represented by her three companions. The four of them make fools of themselves with one action after the next, playing clumsiness and focusing our attention on their trying instead of on the actual result. They attempt to move in synchrony and don’t manage, or keep repeating a move while signaling the technician for a change of light that comes too late, thanking him or her with a hilarious dry smile when it finally happens.

At several moments, they throw sentences at us (“Thank you”, “you have the power”, “magnifici” – pointing at us, ‘you are fantastic’ – “It’s beautiful, no? The heart. Boom, boom”). Vulnerable and warm, looking us straight in the face in the dark, it feels as though they are constantly looking for our approval in their attempts to achieve a form of finished, polished beauty that obviously never comes. On a broadway-like tune, the piece ends with a scene involving water and bodies sliding across the floor, the ultimate feelgood and imperfect form of motion.

A significant anecdote of this particular evening took place when Gribaudi threw a question at us: “What is prosperity?”. After a silence and some short replies shouted from within the room (“Money!”), an audience member threw in what felt was going to be a long speech on colonialism and the political background of the neoclassical Graces of the 19th century. With a snap of her fingers, Gribaudi cut the story short, the audience lights were turned off and the show went on. It was a fantastic double statement: this was neither the moment to engage in such a debate, nor was this performance a democratic one. Within the framework of theatrical convention, Gribaudi attempts to trigger a change in our perspective through a down-to-earth attitude, by offering entertainment and inviting us to have fun. But for a good joke to land, you need to be willing to get it.