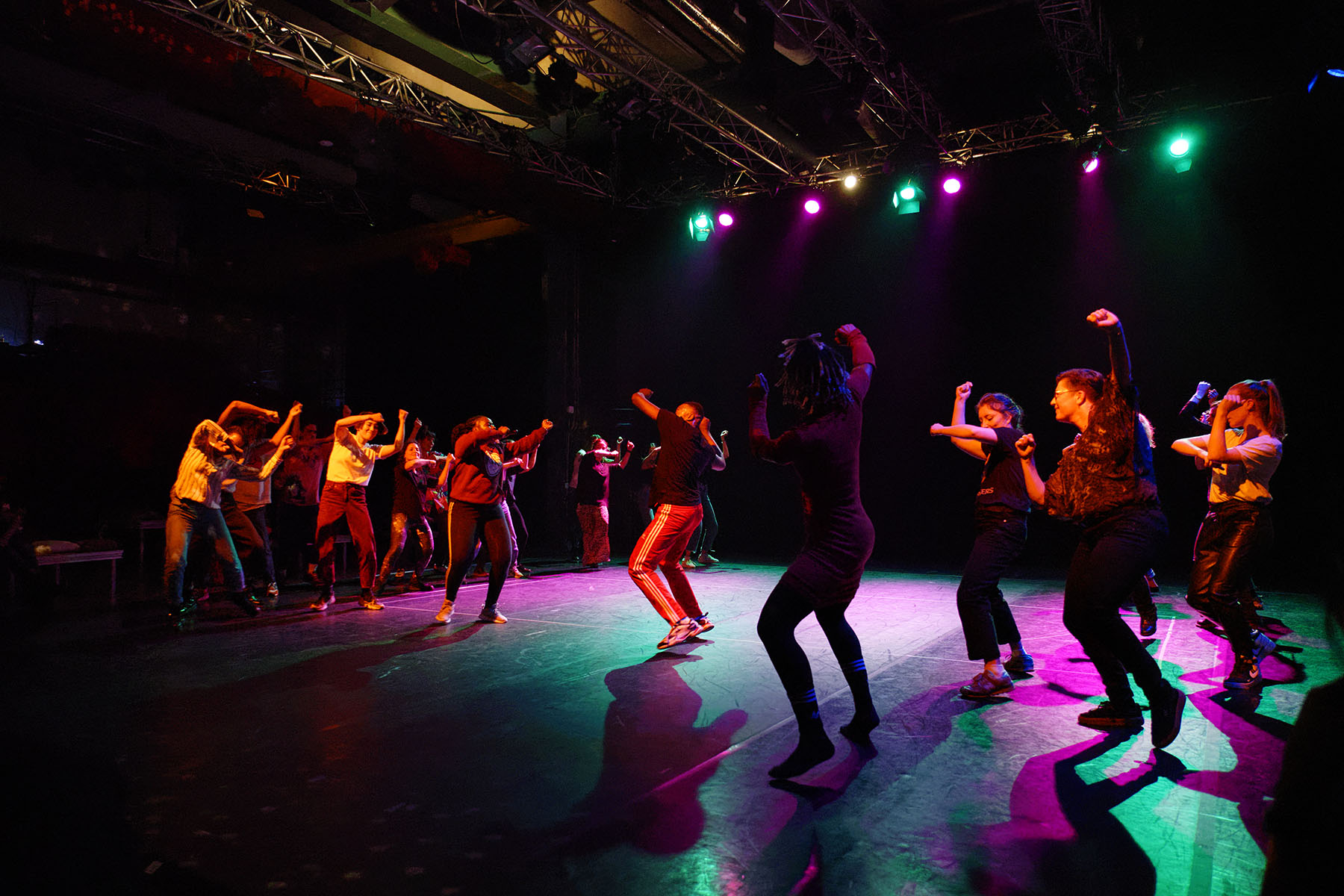 This was, I think, the first time I came to Dansmakers Amsterdam and I had genuine fun. Don’t get me wrong, this “platform for new artists” has tickled my senses in other ways in the past, but this 7th edition of You Better Move – co-curated by Nedda Sou and seen on 8 November – really accomplished what it set out to do: find a link between the theatrical and the clubbing experience, building a bridge between the pleasure of being in movement and the pleasure of witnessing it.

You Better Move is a valuable initiative. Dansmakers offers its house and resources to a different young dance artist every edition, to put together a one-night mini-festival. A rare opportunity at the beginning of anyone’s career, to be a curator, certainly with the backing of an already established platform. In this edition, Nedda Sou proved up to the task, since more than any of the pieces she commissioned, what worked was the evening itself. The wish to bring the poetic and political value of nightlife to a theatrical evening implied challenging the conventions of the performer/spectator relationship right from the start. The bar would remain open at all times, the possibility to move freely was made explicit. “Come as you are” was Sou’s introducing motto, and do as you please.

The program started with a showing of Father Figure, a twenty minute-documentary introducing us to Typhoon, the alter ego of Voguing artist Giuliano Pinas from Rotterdam. It was followed by three dance performances and a crash course in Dancehall led by Danimé (Daniella Mvambanu) and Devante Albitrouw, both members of the Chargie Inc. collective. There were other moments during the evening when the audience was invited to dance on stage, all of them under the good care of DJ KC the Funkaholic. In another room two short movies, selected in collaboration with Cinedans, were playing in loop, but the constant party noises from next door made it hard to focus on them for long.

Father Figure, by Bibi Fadlalla, did two things: it set the mood to warm and intimate, and it introduced the value of Voguing as a nightlife phenomenon that goes beyond mere entertainment or escapism, something the seminal documentary on the matter, Paris is Burning, also pointed out in 1990. Giuliano’s story brings the complex system of prejudice against black gay men to our Dutch doorstep, and we see how the sense of belonging to the Voguing scene and the construction of a very real illusion during the night – Typhoon – helps Giuliano stand stronger in broad daylight. For anyone who is interested, this worthy portrait will be shown again on 21 November during the What You see Festival in Utrecht.

The three selected dance pieces shared a central role given to music. Pluto, by Julia Monschau, is an enigmatic and aesthetically beautiful duet, set to a light techno-beat that invites the eye and the mind to drift away. Conventional but effective. More upbeat but less evocative was Glitter God, by ICK guest artist Jesús de Vega. Performer Moreno Perna appears dressed in a too brightly illuminated, semi-transparent bodysuit lacking in sexyness, and engages in a choreographic score combining religious imagery and historical images of the lgbtq+ struggle. At the end, in a bit of a clumsy crescendo, he turns around in circles, swinging a dico-ball-and-chain close to the heads of the people sitting around him. Neither the friction between physical impulses and certain spatial and rythmical restrictions – as described in the program – nor the hoped-for experience of risk in the last coup d’effect allow for an engaging experience. Since this condensed solo version of a larger piece (GlitterGods/Stigma, premiered in 2017), was envisioned as something to be performed in clubs (with more people and less light and more noise and a different set-up, maybe) it just wasn’t the night for this work to function.

In the middle, and I have saved the best for last, Diego Oliveira’s Existential, performed with Kim Tawjoeram and Jeffrey de la Fuente, killed it. Standing in different places on a dimly lit stage, the three of them dance to a lovely mix of hits from the nineties as if no-one were watching. But we are. We are witnesses to the dancers’ inner groove. Relating to each other in space and being affected by each others’ movement, the three performers in Existential keep a mesmerizing balance between going with the flow and vying for our attention. They are clearly not just doing anything for the sake of it; they make sure we stay connected to the evolution of their moves. Jeffrey de la Fuente embodies this nuance especially beautifully, going from very small movements, gazing down, to some lovely open dance sequences that I would love to steal from him and use next time I am on the floor. Oliveira’s piece made us itch for the inner joy the dancers were experiencing, and the After Groove – an open invitation to share the space with them and partake in a guided, collective battle right after our applause – was an ideal outlet, offering Nedda Sou a peak in the kind of experience she had envisioned for the evening: “This is the rythm of my life, the night, oh yeah”. Whenever she organises another party, count me in.