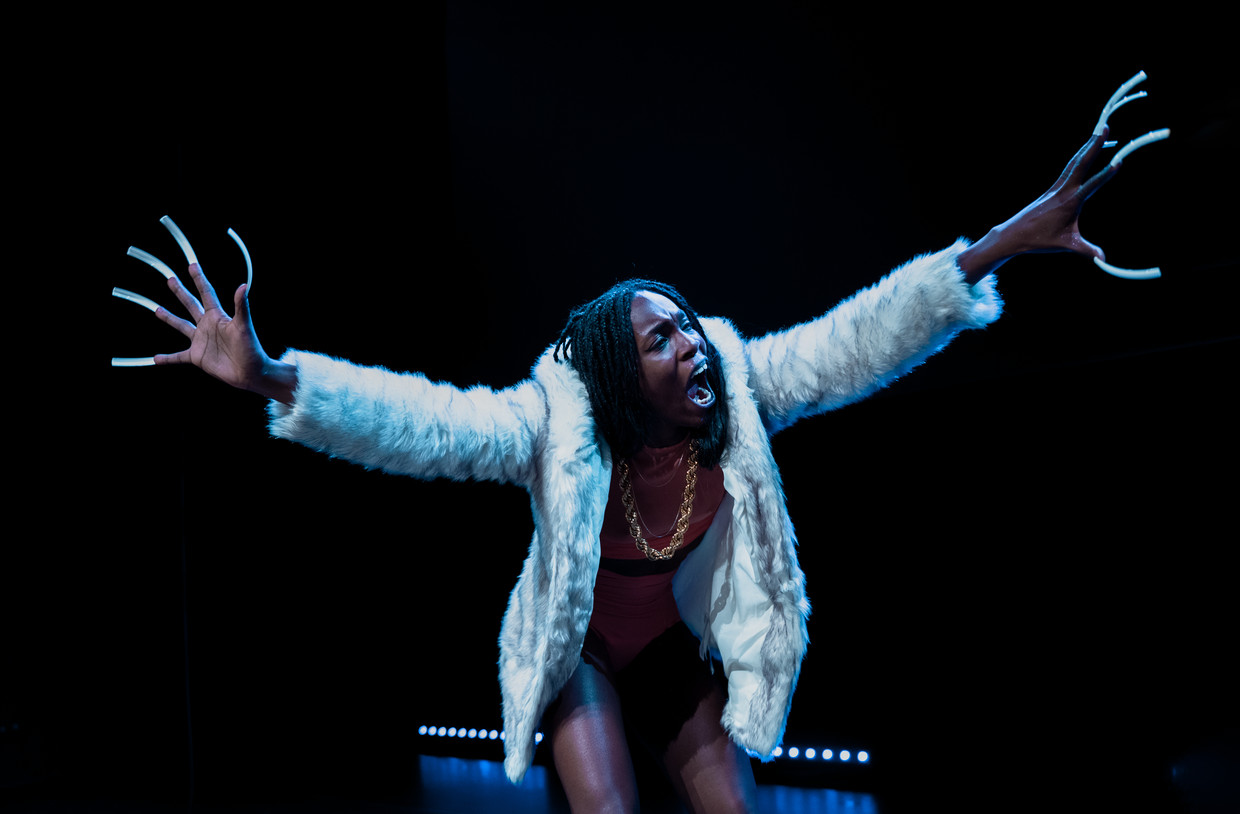 Cherish Menzo is a rock-solid, captivating performer. In her solo Jezebel, premiered during the To Voice Festival at Frascati on 5 November, she revisits the video vixen, an ideal avatar to touch on very current and polemic debates such as new forms of feminism and misogyny in hip hop culture. A shorter version of the piece already earned her the Fringe Award 2019, and this polished premiere confirms: Menzo is a force to be reckoned with, not only as a dancer, but also as a brave maker of her own work.

Jezebel starts with Menzo entering the space in slow-mo, trundling in on a silver lowrider in white, opulent fur and underneath it, a pink latex bikini, a golden chain, sneakers, tube socks and bare legs. Is it a woman? Sure, maybe, but first of all it is an image. And Menzo cleverly feeds our curiosity as to what configures it, one breadcrumb at a time.

Props, costumes, make-up. Twerky moves, grimaces, gestures of coolness. Lyrics. Menzo’s choreographic and movement-based research was fed by all sorts of elements that are informed by the vixen – female models of colour appearing in hip-hop videos, very popular in the late 90’s, sexual objects symbolizing wealth and succes or empowered women within the musical industry (depending on who you ask). As the avatar Jezebel gains in depth, the appearance and progressive discovery of these elements provide the piece with structure . Menzo herself, all the while, is on fire on stage. Slightly aloof and committed, really in it, her presence is all-encompassing and sweeping as she flows from one scene to the next. One cannot look away from her, nor stop wondering what she – or he, or it – is about.

Thought-provoking and witty, well-structured and well-paced, Jezebel is effective on many levels. Menzo herself is the piece’s biggest asset, but the outstanding work of musician Michael Nunes certainly helps in keeping the audience engaged with her journey at all times. Dramaturgically the piece is also rich and clever, channeling thought without falling into moralistic stances or over-evident illustrations. For example: halfway along the piece, Menzo throws herself onto the floor, crawling under her fur with her back towards us. She breathes and pants into a microphone, and when she starts singing her voice comes out modulated, unrecognizable, difficult to understand… A suspense is built, we want to know what she is saying, why she is saying it… until finally she stands up to sing loud and clear, now accompanied by the projected lyrics to the song Oochie Wally on the back: “He really taught me how to work my body / He really taught me how to do it with my mouth / He really really tried to hurt me hurt me / I really love his thug and gangsta style”. Ah, OK. We didn’t just hear it now, we listened. And that might have been the only point.

Maybe it’s too easy a link to make, but Menzo, who was one of the dancers in Liesbeth Gruwez’s The Sea Within, resembles the Flemish stage-monster in a couple of things. They are both dancers with the ability to commit fully to a performance without loosing sight of their audience for a minute. And they both know to surround themselves with talented collaborators, enablers who bring that presence, as happens in Jezebel, to a completely new level.