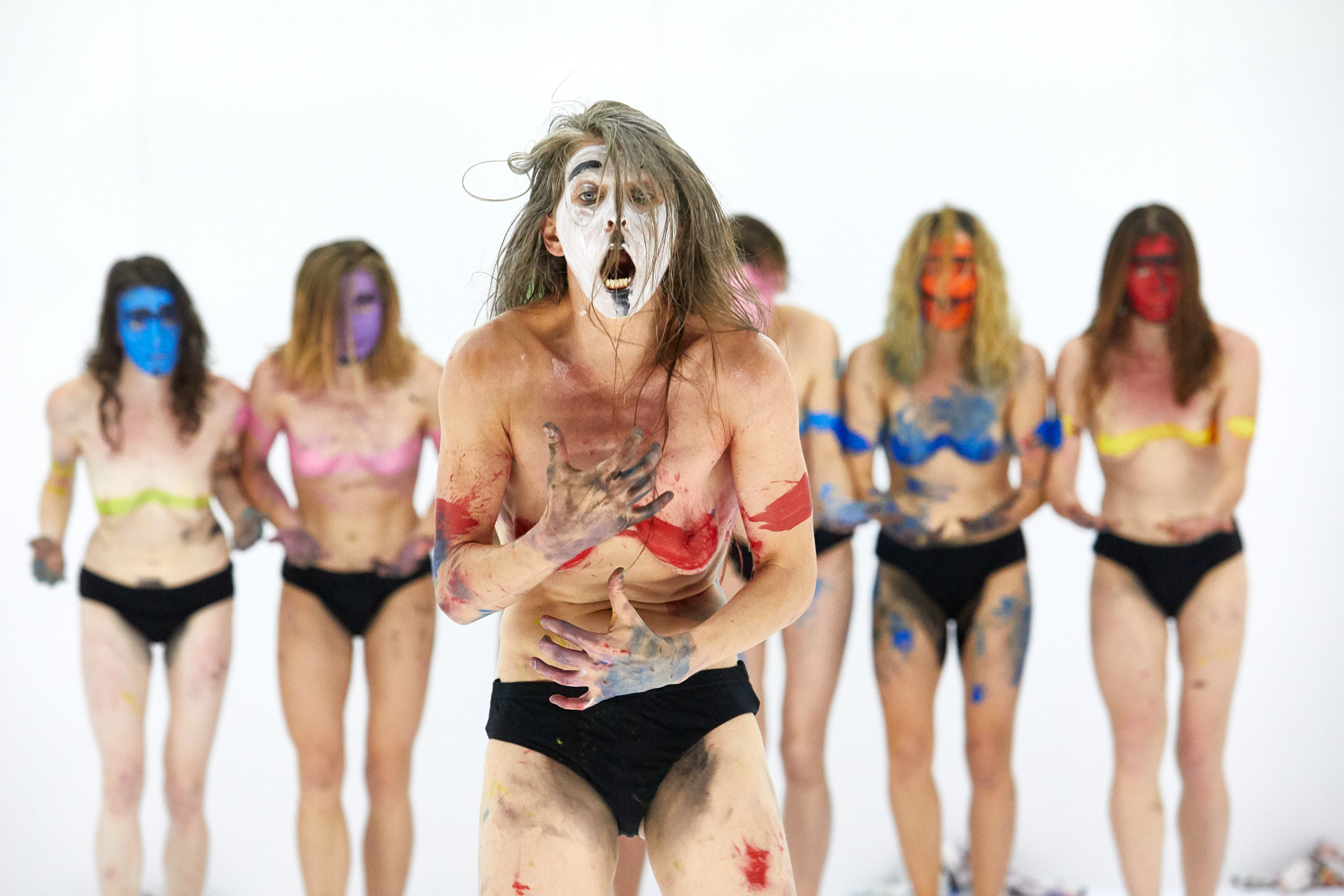 The category is: Sickening. In RuPaul’s Drag Race sense of the word. In Saison Sèche (Dry Season) we are invited to witness the demise of a system in decay, fast-forwarded by the outright anger of performance-artist Phia Ménard: sick of the battles she has to fight as a trans-woman, sick of the slut shaming she has had to endure until this day, sick of it all.

Both journalist Annette Embrechts’ six-page article for the program – kudos to Chassé Theatre Breda for its commission – and Ménard’s Non Nova company’s website generously elaborate on the conceptual basis of this outburst. Cornerstone: philosopher Judith Butler’s defence of drag-contests as one of those uncommon places where the social construct we call gender is potentially sabotaged. Saison sèche is not about shaming men, it’s about performing the archetypes of hegemonic masculinity in order to render them powerless. Within the walls of a clever décor designed by herself, Ménard vomits her genuine disgust on the matter of male dominance by means of an all female ritual where caustic irony, body politics and suspense intertwine. The resulting act is thought through in every detail and exceptionally well performed: “Tens, tens, tens across the board!”

Scene 1: seven women move within the limits of a white room, dimly lit by old-fashioned fluorescent lights. The ceiling is so low they struggle to get upright, and each time the thriller-like soundscore by Ivan Roussel surprises with a bang, they twitch and fall to the ground, stressed like orca’s in a narrow pool. Their baggy, equally white costumes don’t cover their genitalia. Together with the cloth puppets they drag along, the costumes add to the impact of their humiliating condition.

Scene 2: the same women, now completely nude and with the ceiling at normal height, sit in a semi-circle. Step by step they pour paint out of their puppet’s limbs to mask themselves behind another persona. Red, blue, pink, yellow and green for faces and breasts, black for the genital area. Finally, from the puppet’s bellies – symbol of a purportedly genderless childhood – they pull out a pair of underpants containing marbles and put them on. Halfway men at this point, they grab their marbles and start marking the rhythm (as if they were maracas) while jumping and running in circles across the space. In the brilliantly timed, wacky crescendo that follows they cry, bark, laugh and cry as they go, building up a cathartic and centrifugal energy that is clearly felt in the room.

Scene 3: to complete their new entity, the drag-kings dress up in seven typically masculine prototypes. The priest is there, the ‘jock’, the security guard, the fisherman. Once in full costume, the non-glass-ceiling moves loudly once more, hitting the roof – pun clearly intended. Then a new ritual starts, but this one is dominated by lineal forms and martial pacing, and filled with those aggressive gestures used by (some) male humans to violently affirm their position at the top of the food chain. Highlighted on this white canvas, Ménard reveals their true nature: these are performed gestures, and nothing else.

The closing image, with the walls of the cabinet literally decomposing in front of us, is yet another proof of Ménards theatrical craftwomanship. The system crumbles, and the colour of the liquid pouring down the walls can represent as much the sickening feeling that drove her to set up this shop in the first place as the shit the world we live in is made of. For now.