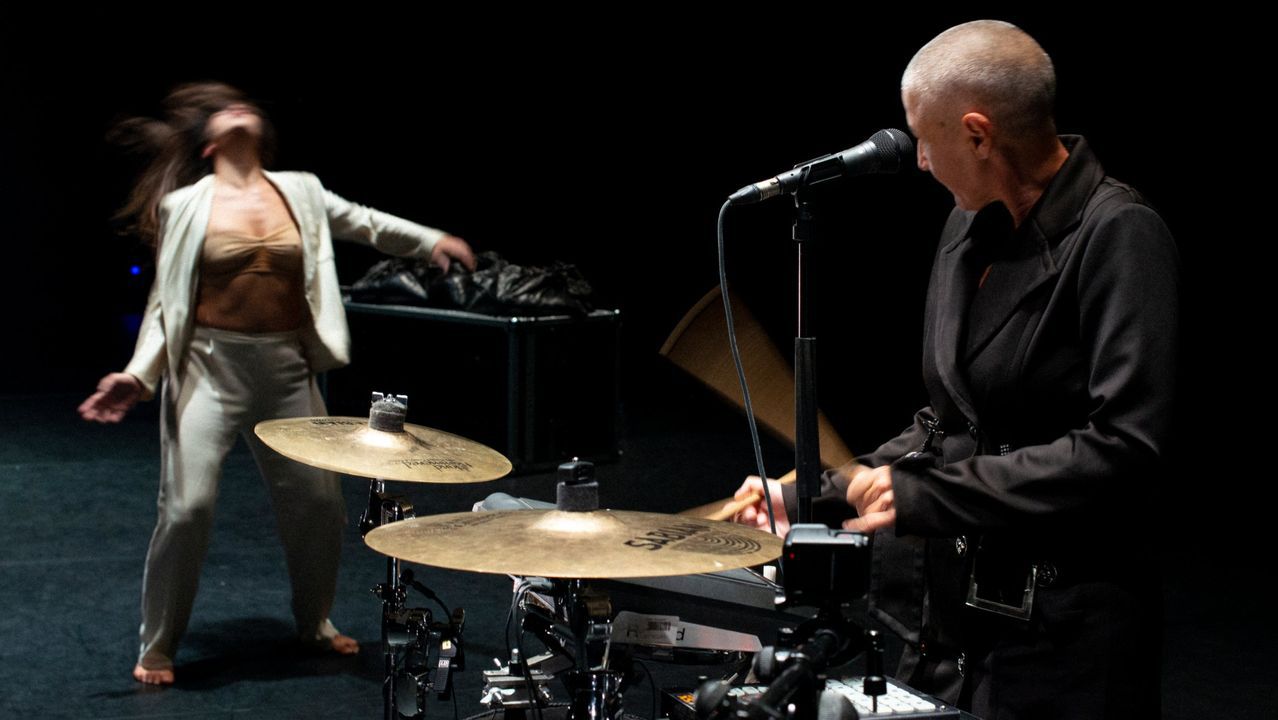 Tena Busquets, the driving force behind the festival, has always pushed for Sismògraf to be immersed in Olot and its whimsical environment. This translates into one of the core themes of the festival: Dansa i territori – dance and turf.

Turf can relate to several things. First: site-specific works. Eighty per cent of the shows are freely accessible and most performed in public spaces across town. But turf can also translate into community projects; or into performances which use a folkloric heritage to address contemporaneity. Below, Clàudia Brufau and Jordi Ribot talk about three works in the 2019 festival that explore cultural roots to go beyond reconstruction and towards relevance for today’s audiences.

Aèr by Laia Santanach was presented as an ongoing research: a draft version of the work Santanach is making after winning the Delfí Colomé award (10.000 EUR given yearly during the folkloric festival Ésdansa to a project aiming to combine contemporary dance with forms of Catalan folklore). Aèr is performed and created together with Mario G. Saez, Anna Hierro and Carles Martorell (musician).

CB: What do you think is the core idea behind Laia Santanach’s revisitation?

JR: Santanach is a seasoned contemporary performer, versed in everything to do with flow, spiralling movements and the expression of freedom and risk through improvisation. In Aèr she took it upon herself to look into something very different: the contrapàs, a ceremonial Catalan ronde, originally intricate and two-dimensional, traditionally danced by men on specific dates in public places. I think the tension between both dimensions is the spark that holds it all together…

It’s all in the music, really. That’s where the tension happens in the first place. I spoke with Laia afterwards, and she told me the musician-performer Carles Martorell did research on the structures and rhythms of the original contrapàs. His soundscore, partially created in situ by means of a last-generation electric guitar, proves paramount to Àer’s success, providing a continuous base of binary and ternary phrases, a clear rhythmic link to the folkloric score that is always present. CB: But it’s not only in the music that we find a link. It’s not just contemporary choreography to a score inspired by a folkloric theme. Physically, certainly in the first section, the performers embody a form of perpetuum walk holding the energetic field in check, in a ceremonial tempo that very much relates to the religious background of the piece…

JR: Exactly. The small duets and individual bursts of movement happening in the first section spring out of that energetic field without upheaving it, proposing new dynamic games with gravity that paradoxically make the piece lighter. (Aèr means ‘air’ in medieval Catalan.) This dancing on the threshold, projecting contemporary practices without cancelling the ritualistic dimension of the ancient form, kept me interested the whole time.

CB: This tension is even more apparent in the final part of the piece.

JR: I actually got the chills for a moment! While the musician starts to improvise melodically, yet never losing the rhythmic structure, the dancers hold their (and our) ground. We get to see an actual physical exploration of the original steps and codes, it’s the contrapàs revisited. Putting this at the end was as efficient as it was conventional. In this, Aèr became an exercise of old-fashioned-contemporary choreographic weaving, a bit resembling the studies by GN|MC [Guy Nader & Maria Campos] on forms such as the pendulum or the circle.

CB: And the thing is that this climactic, physical build-up comes after a more static, quite long section where images – compositions emulating religious paintings, maybe? – accommodate us in a very different way of looking at the piece…

CB: Political, I’d say. Laia has said at some point she changed the male/female distribution in her embodying of these images, inspired by Eli Rekallah’s In a Parallel Universe project.

JR: But this is decoded in a narrative way. The contrast between the enigma these images pose to the mind and the purely physical enjoyment of the ending, where the dynamics of the contrapàs are turned into a rave, was a big plus for me.

Mercedes Peón is one of Galicia´s most renowned singers. She researched Galician folk for years, wandering from one small village to the next, looking for orally transmitted songs and sounds of old, which she then taught to others. In 2000, she broke internationally with the album Isué, where she gave a personal interpretation to the results of her life-long quest. Janet Novás, a younger Galician contemporary dancer with a growing international profile and a strong interest in constantly questioning the raisons d’être of her own movement, led this project. Mercedes máis eu (Mercedes and I) gathers the sediment of several encounters where, through improvisation, they looked at the particular relationships between the dance of one and the music of the other, both grounded in the same heritage.

CB: While Aèr’s approach is quite analytical and as you say based on old-fashioned choreographic weaving, Mercedes máis eu is something else completely. How important is the chemistry here between the two performers?

JR: It’s everything. Mercedes máis eu, was one of the most acclaimed pieces of this edition of Sismògraf. It was quite a mindblowing experience, honestly – a kind of punk rock Galician lament.

CB: That sounds very appealing to me… but besides this wonderful label, how did it work for you?

JR: I feel that they didn’t overdo it. Mercedes Peón is a phenomenal stage-animal. No additives needed. And in terms of set-up, Novás made an effort to present their conversation as such: a conversation. Worked on and polished to be humble and seductive, powerful in anything but a masculine way, this piece really allowed the energetic heritage of Galician spirits – these ‘genderless entities of the No-mundo [the hereafter]’ as Mercedes Peón called them during the piece – to become apparent in a contemporary fashion.

CB: Where did the link with tradition or heritage come from?

JR: From this humble presence, I guess. And from music and movement, of course. Using the codes, tones or ways stemming from Galician folklore, Novás and Peón presented themselves both as performers and carriers of that legacy, another link in a very long chain. It’s as if they just wanted to state: ‘I am Mercedes, I am Janet, and this is where we come from‘. So simple and yet….

CB: I didn’t have the opportunity to see this piece, but I can hear you had a blast with it. Apart from their powerful relationship and the music and movement, were there other elements that drew you towards their universe?

JR: A lot of what made this piece so inviting was in the structure. There were moments of loaded physical exploration – where Novás got lost in her own movement for example, tip-toeing around the space, twitching her limbs, breathing loudly as if in a trance, accompanied by Peón’s voice (and drums, and bagpipe, and rocks, and pandereta). And then there were well-placed moments where the focus was brought back to the plain reality of the exercise. Janet or Mercedes would stop the action, and while one would explain some conversation they had had during the course of their research, the other one changed clothes or drank water. This brought down the mysticism and allowed us to experience their actions as something present, like the smell of the two bags of earth Janet Novás scattered on stage at one point, to dance upon it.

Jon Maya founded Kukai Dantza in 2001 to build bridges between Basque dance and contemporary choreography, and has invited renowned choreographers such as Cesc Gelabert and Marcos Morau to create for his company of dantzaris trained mainly in Basque dances. Erritu (ritual, in Basque) is the outcome of a collaboration with Sharon Fridman, an Israeli artist based in Madrid. Fridman’s works are highly physical and based on contact improvisation technique. His choreographic style is virtuosic and filled with jaw dropping portées, and his pieces usually convey spiritual connections between dancers through the complex harmony they embody as a group. CB: We experienced this encounter between Fridman and Kukai at midnight in the crater of the Montsacopa volcano. The atmosphere couldn’t be more picturesque. When we arrived, an already exhausted dantzari was executing a cabriole over and over again on the stage placed at the middle of the crater. On a corner, the countertenor David Azurza projected a phantasmagorical presence singing a dark, high-pitched tune which flowed around the dantzari’s gasps. Did you enjoy this long, sustained beginning? Do you think it was worth it?

JR: Yes. The duration allowed us to include the scenery in our perception, while the repetitive song and Azurza’s evocative classic voice set the stage for something truly ceremonial. The sacrifice of sorts of the dancer, his sweat, his breathing… this beginning really tuned in with what Kukai set out to create: a ritual, through dance, in connection with nature.

CB: Erritu unfolds into a tapestry of ceremonial sculptural group dances. I had the feeling that the elegant stiffness of the dantzaris – five men and 2 women – struggles to adapt to Fridman’s more bendable flow of movement ingrained in the choreography.

JR: I agree, it never became more than a fight between two styles. It actually looked a bit like mixing oil with water: the frontiers between the two qualities, the choreographic instructions and the poetic universes remained clear.

CB: …and perhaps my expectations were too high for this piece, because I follow both Kukai Dantza and Fridman’s work with interest.

JR: I wasn’t familiar with their work but I think this didn’t level the expectations of its own set-up. The cold night in a lush, green crater, together with an extensive light, sound and smoke design – even the intense and theatrical presence of the singer… it was a lot to live up to. The whole choreography looked and felt forced, while Erritu wanted, precisely, to work towards a collective, organic and cathartic experience, certainly towards the end.

CB: Yes, at the end the ritual opens up. The dantzaris hold hands in a circle and one by one they are joined by  choir singers who walk in from the audience. The piece draws a very clear arc: from one dancer jumping alone to a community holding hands. Formally, the message is clear: the ritual is about reaching the others, a celebration of togetherness.

JR: and yet… I got more chilled by the cold than what was happening on stage.

CB: The more I think about Erritu, the more I wonder about how that alchemy between traditional and contemporary dance can work. It has definitely something to do with density, with how a movement can be loaded with stage presence or the ghosts of a cultural heritage. But in the end, whatever colours this magma, it also needs to be brought to today’s stages (or craters!) with a choreographic strategy that lets it come alive for the audience.