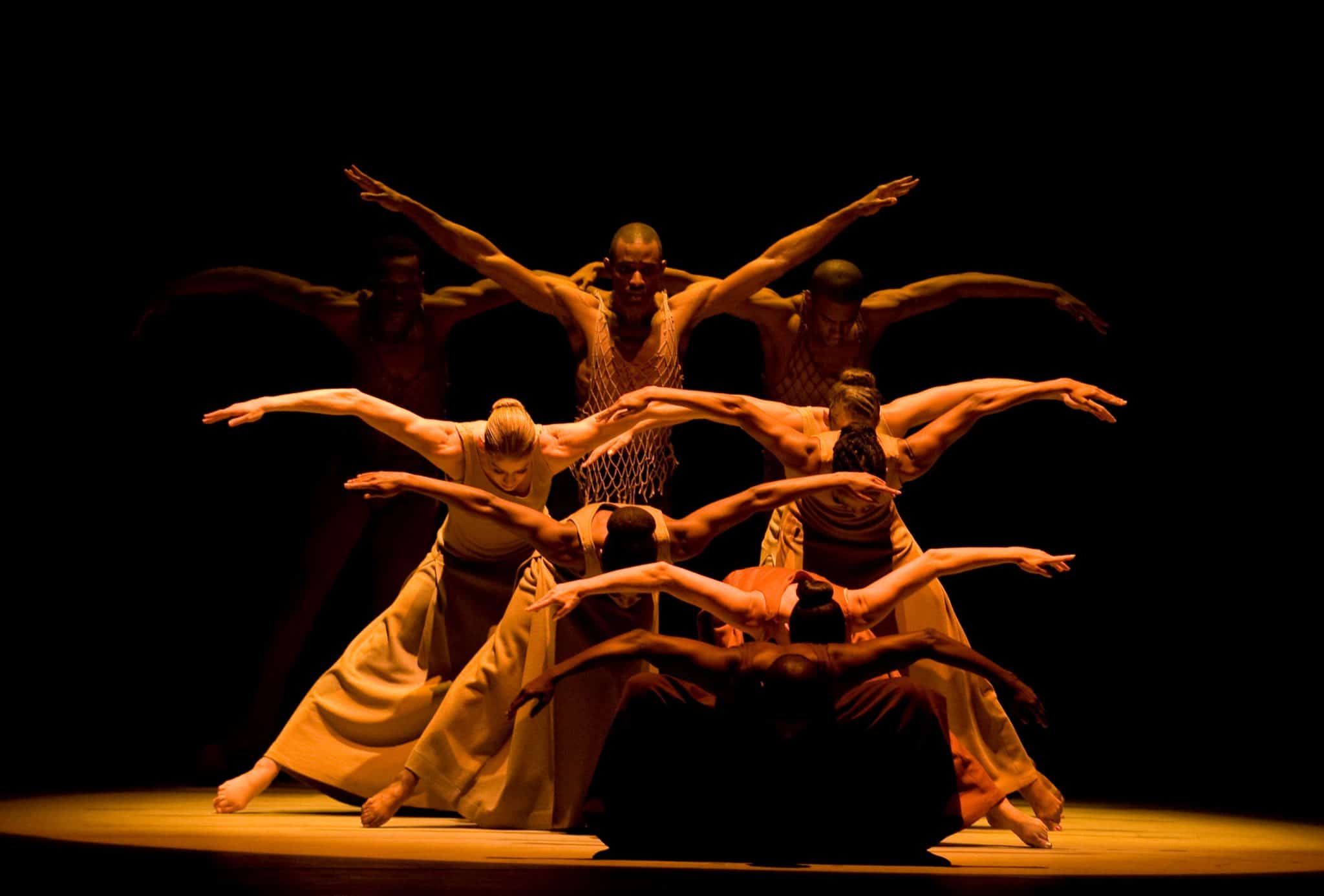 In the foyer of the New Luxor Theater in Rotterdam, several banners serve as an improvised photo-call. A Dutch woman of colour struggles to make a satisfying selfie with a scene from the ballet Revelations in the background, until another (white) woman steps in and offers to help her out. “Make sure the name of the piece is visible, please,” the first implores. Her thrilled tone of voice and body language speak for themselves: this evening means something to her.

Alvin Ailey, choreographer and activist, founded his “rainbow” company in 1958 in New York with a two-fold aim: on the threshold of the Civil Rights movement he wanted to defend and promote blackness as an embedded and essential part of the very diverse movement culture of the US, while offering dancers of colour decent job opportunities in a context where there were close to none. Trained with Lester Horton, the first modern dance choreographer to include Native American dance forms in his intricate and always enjoyable modern dance technique, Ailey opened that door even further. Unapologetically mixing heritage and modernism, his body language became a statement which, added to the clearly illustrated themes of many of his ballets, brought hope to many. Revelations (1960), the closing piece of this and every other show of the company, remains the unparalleled crownjewel of his repertoire in this regard.

A good example of Ailey’s socio-political heritage lives on in the present artistic director of the company, Robert Battle. For Battle, also the choreographer of two out of the four pieces of the evening, Juba (2003) and In/side (2008), witnessing the work of Alvin Ailey as a student at Julliard made him “proud of being black” and reassured him of the possibility that he, too, could make it as a male modern dancer in the US. He recognized himself in Ailey’s work, and in his company. Nonetheless, the true value of Ailey´s initiative was that it wanted to be inclusive, in the broadest sense of the word. He favoured but did not limit his company to black people, and initiated numerous initiatives to bring modern dance to less favoured neighbourhoods, among other initiatives. In Ailey’s own words: “I believe that dance came from the people and that it should be delivered back to the people”.

This all-American philanthropic oneliner resounds in the set-up of the evening. A luxurious gala organized by the patrons of the Foundation Droom en Daad (Dream and Action) with the support of Holland Dance Festival, aimed at bringing dance of the highest level to the inhabitants of the city of Rotterdam. But, even if the pairing up of city and company is far from innocuous – two thirds of the citizens of Rotterdam having a migrant background – the audience invited to this event is still overwhelmingly white. Celebrated and applauded as the presence of Ailey’s company in our context must be, the long and winding road ahead should also be acknowledged. The existence of the “rainbow company” makes as much sense today as ever.

Speaking of rainbows, Darrel Grand Moultrie’s choreography catches our eye thanks to the strong pink, blue and yellow costumes, set on an equally brightly illuminated stage. Ounce of Faith offers technical fireworks to the easily pleased, and follows in Ailey’s footsteps when it comes to unapologetically combining different styles and traditions: neat and wowing double attitudes followed by warm swinging steps propelled by the hips, that kind of thing. The music equals in mélange, offering a combination of percussion, gospel rhythms and jazzy tones in what is experienced as pure jouissance: the pleasure than exceeds movement, for both the mover and the one who sees the body move. Regrettably, Grand Moultrie feels the need to explain the meaning of the title with a voice-over, talking about the music teacher who gave him a chance at the beginning of his career. Together with several cheesy and far too illustrative scenes – like the first solo by Khalia Campbell, where she overplays the shaky struggle of a beginning dance student without fooling anyone – the voice-over loads the piece with an overdone educative aura that distracts from its actual power: the movement material and the performers embodying it.

Inspired by a ritualistic dance brought to the States by African slaves, Juba is another good example of the cheekiness and ease with which this company manipulates heritage for the present. It has been called a Rite of Spring, yet choreographer Battle himself recognizes chiefly: “You could also name it my own version of Russian folklore”. A quartet of dancers – three male and one female, hail-worthy Jaqueline Harris – dressed in baggy blue shirts with a simple chord as a belt, reminiscent of darker times, invest themselves to the fullest of their energy in what wants to be a semi-ritualistic performance. But here, again, very simple choreographic choices impede an otherwise interesting physical material to take flight.

In/side, premiered five years later than Juba, portrays a more abstract and definitely more mature Battle. Here the gestures derived from African dances (double steps brushing the floor, a harvesting grasp of the hand from the outward in, towards the belly) are allowed to serve the emotional and abstract hurricane Battle intended to portray. In this eight-minute-long solo, dancer Yannick Lebrun rendered an intimate performance on the notes of Nina Simone´s Wild is the wind, representing the best of what Ailey’s company has to offer: its performers. Strong and precise in execution, virtuoso and explosive, yet always soft and welcoming in their presence.

And then came Alvin Ailey. Set to gospel music, Revelations leads the spectator on a spiritual journey, every scene illuminating a different aspect of American black culture. In the first scene, for example, all the dancers of the company combine individual phrases with moments of gathering centre stage, supporting one another in dynamic images that make us feel their collective strength in times of sorrow. Revelations undoubtedly carries a historic aura, but doesn´t feel dated. On the contrary: its energetic message of hope is as meaningful to the world as the existence of the company itself, and compared to the other pieces of the evening, the choreographic mastery of Ailey still shines bright: the whole evening can be traced back to him.