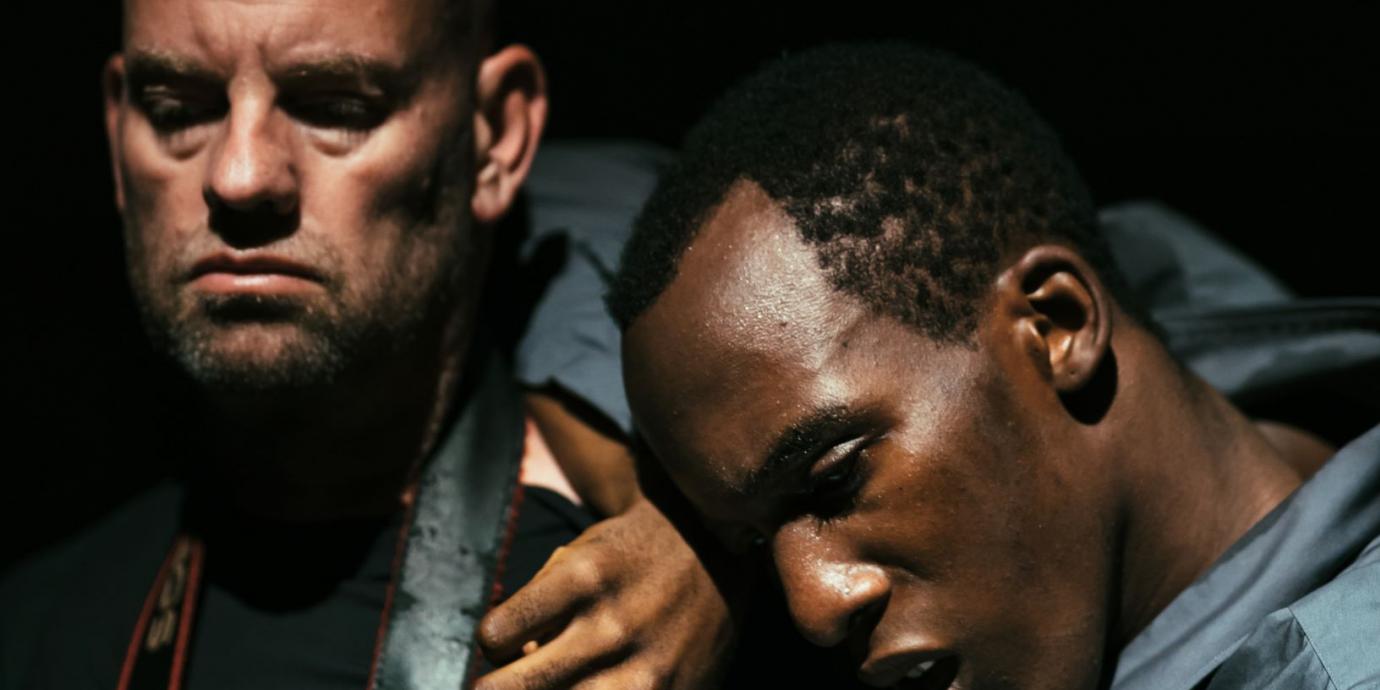 “Let us take you to a world where photography becomes physical”. The program for SHOT, which premiered last Thursday at Korzo in The Hague, is full of powerful reflections. For one, the handout explores the complex relationship between dance and photography, two art forms traditionally obsessed with the manipulation and suspension of time. It also tackles the overbearing visual nature of our times, in which we are constantly bombarded by images from all sides. And then there is the slightly erotic nature that lies in observing/being observed (or catch/being shot at with a camera): who possesses whom? What is captured, when photographed, and what escapes?

Right from the start, Yannick Verweij’s composition of the space (a white dance-floor, laid on the slight diagonal of an otherwise bare theatrical space, and two huge and equally white canvasses on wheels that will serve now as a screen, now as a mobile background dividing the space) suggests an evenly interesting amount of possible angles. As we enter the space, we see photographer Menno van der Meulen, his back turned towards us, camera slung around his neck and dressed in what look like plain rehearsal clothes. When dancer Christian Yav enters, the light and volume of the music (until then just a tune in the background) change abruptly. Yav, dressed only in trousers folded up to his ankles, starts slowly striking poses as van der Meulen jumps into position. Being allowed to visually take in his model’s body through the lens as much as we do, he starts shooting, and shortly after, “his” pictures start to appear projected on the screen behind Yav’s body in movement.

Regrettably, the myriad of intriguing relations this non-theatrical set-up evokes – between our eyes and the dancer moving for us, between the camera and its human object, the moving body and its suspended replica, etc. – is cut off as abruptly as it started. Yav approaches his stage-partner and grabs his wrists. The music stops, the lights change. Van der Meulen – suddenly turned into a character in a theatrical play – continues to take pictures at close range, trying to keep his eye on the camera, playing the part of being overpowered by the hands of the dancer. The resulting, blurry pictures projected onto the canvas in the back are as messy as the physical struggle between the two is, yet far more evocative than the latter.

Shot after shot and scene after scene, the nature of the elements at play keeps changing. If at one point, Yav performs a solo with the camera, apparently turned into a brainless being who doesn´t know what the device is for – his body twitching to every flash – he very naturally endures a razzia of van der Meulens flashes in the next. The same distracting variety in approaches affects the photographer. What is being questioned here? Van der Meulen’s role as a paparazzo who tries to catch a rebellious model; or the nature of his work with the camera – as a symbolic example of the overbearing presence of images in our present context?

When, towards the end, the photographer goes back to doing what he does best, the piece comes back to life. Several pictures of Yav’s face – captured at close range and magnified on the screens – enhance his enigmatic presence, the small evolution of his expressions now clearly on display. Time is perceived differently as we see present and immediate past travel together into the future, re-opening a door to that world the program spoke of in the first place. But, by then, too much energy has gone to waste trying to navigate across dramaturgical uncertainties. As appealing as the different angles are, the reflections promised in SHOT remain, as so many images do, on the surface.