SPRING Utrecht 2019: “In many ways, the future is already here” 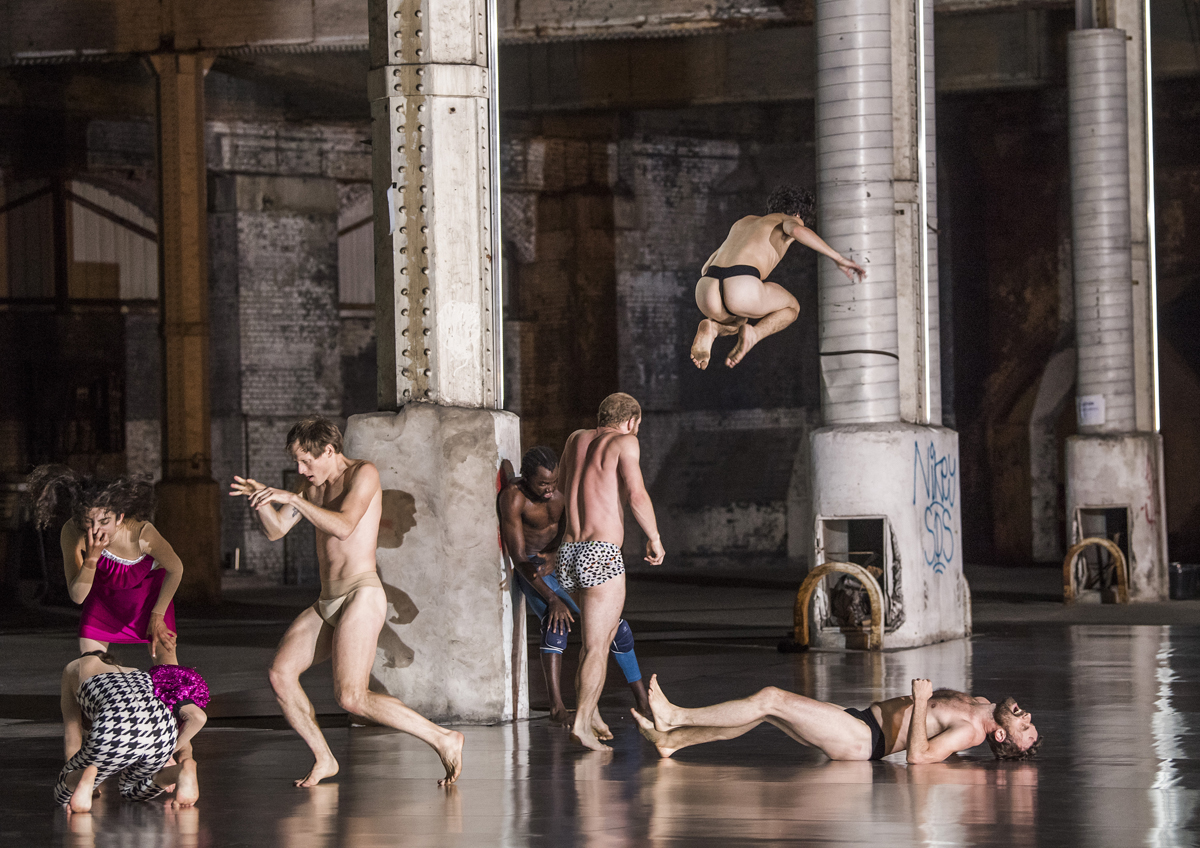 SPRING is one of the most daring stage festivals in the Netherlands. Taking place in Utrecht – which, together with The Hague, forms part of a megacity-in-the-making around hyped-out Amsterdam, a 20-minute ride away by train – the festival surfs the waves of new developments in performing arts to critically reflect on new developments in the world around them. With an annual line-up of artists on the crossroads between visual arts and performance, this 10-day festival in May (with a shorter edition in autumn) uses dance as a generic trampoline to dive into ________ [fill in the blank]. The programme is then organised (or disorganised) around several hashtags which can, of course, be followed, shared and retweeted all over.

‘In many ways, the future is already here.’ Andrea Božic introduces her immersive theatrical experience Porocity before we start. This ‘performed stroll’ takes place in Het Stadskantoor, a centralised public services hub located in the new station complex. It’s a ‘smart’ building with no fixed workplaces, Božic explains, with algorithm-based gadgets that turn it into a sort of living thing. A group of thirty to forty people sets out to get lost in the labyrinths of this now empty building (it’s a Sunday), guided by the performers Matthew Day and Julia Wills. They walk slowly and speak in a soft, neutral tone, looking around while narrating anonymous dreams and using the halls as their landscape. Or they refer to Het Stadskantoor as if we were looking at its blueprint in 2007. Twice, Julia tells Matthew where he can find the bathroom: in Porocity we are jumped from past to present to vision to dream, enhancing the sense of this public building as a dystopian non-space, an odd cocoon taken out of a Murakami novel.

Escaping formats and labels since 2000, the always visionary collective Rimini Protokoll are a SPRING favourite. Uncanny Valley outdid every expectation. If in the past they used a guided tour through Utrecht, conducted over the phone by call-agents in Delhi, to address globalisation, here they kept us in the black box of a conventional theatre. In this alleged sanctuary of authentic presence, Uncanny Valley confronts us with its antithesis: a robot looking very much like German author Thomas Melle. Melle – or rather, his recorded voice – shares thoughts about authenticity, identity and AI, combined with comments about his bipolar disorder. ‘What if I could better myself? Are we only human by our randomness?’ Melle tells us how having an android take his place reduces his anxiety, and how the making of its face – a process we are invited to see on video – felt a little like a metaphorical death. The term Uncanny Valley refers to the odd feeling we have when an artificial entity seems too close to human for comfort, a feeling triggered by unsolved (yet increasingly present) ethical questions, many of which are brilliantly showcased in this project. Photo Something (out of nothing): Alwin Poiana

Objects also play a prominent role in Something (out of nothing) by ICK and Flemish visual artist Kris Verdonck. In the only captivating scene of the play, fluorescent plastic structures slowly swell up in darkness, producing a mesmerising effect that could last for hours; but it’s interrupted by a whole battery of dehumanising stage strategies. Faces covered with geometric masks, dancers-turned-figures embody a tired form of progress. In utter silence, feigning boredom, one proposes a gesture, the other watches, then stands next to the first, repeats the gesture, adds a new one. Etc. It’s like looking at the learning curve of a pubescent algorithm. On three occasions we hear the same recorded voice of an Angelus Novus, speaking of doom and the impossibility of turning back Time. An impressive yet excruciating soundscape of electronic noise by Leila Bordreuil closes by killing any remnant of humanity in the room. Verdonck proposes an apocalyptic and futuristic crossover, intellectually challenging and ultra-rational. I wonder what Melle’s android would have thought of it.

More evocative was the installation Polygon by Lawrence Malstaf, a huge yet apparently feather-light structure made of iron tubes – the bizarre skeleton of a camping-tent, perhaps – hanging in a hallway of a shopping mall. Mechanically orchestrated from the sides by cables with weights moving up and down, the structure moves, trembles, has spasms in what feels like hesitation. Instead of efficiency, Malstaf puts AI in the service of human-like randomness.

On a full recording of Mozart’s Requiem, a diverse group of dancers sets out to perform ten thousand unrepeated gestures over the course of an hour. Speeding, they execute their task running in and out of an otherwise completely bare stage, dressed in flesh-coloured underwear, jeans, ninja costumes and corny circus-like dresses. Energy is spilled like wine in a roman orgy as they chain variously religious, abstract, casual, sexual, animalistic, hysterical, iconic, childish and accidental gestures in a non-stop stream. Someone shouts ‘MOVE!’, then collapses; and three other uncoordinated actions take place a split-second later, no matter what. This overload of choreographic nonsense becomes hilarious once the performers invade our space, shamelessly crawling over our heads while counting in French: ‘sept-mil-huit-cents-vingt-quatre! sept-mil-huit-cents…’ The proposal is so transparent it can handle  it all, and in what feels like a paradoxical state of mental quietness we are confronted only with the absurd yet very present and fleshy sacrifice of their exhaustion.

This simple exercise turned Dionysian feast turns 10000 gestures into the ‘ritual for atheists’ that Attractor failed to become. This collaboration between the Australian Dancenorth and Lucy Guerin companies, and Senyawa, a music duo combining Indonesian deep-voice singing with electronic and metal sounds, begins with a conventional circle centre-stage. In well-rehearsed unisons, the dancers engage in crafted and flowing group compositions and duets, now and again combined with an intense-looking solo. But while Senyawa’s musical constructions are beyond magnetic, the otherwise well-executed choreographic forms lack depth. Not even when a group of audience members joins the dancers on stage in a prepared coup d’effect: instead of engaging in any form of togetherness, they are used as amateur props to represent one. Attractor’s ambitious programme aims for a visceral experience, in which audience and performers would ‘unite in a cross-cultural, shared ritual’. Instead, it inaugurated SPRING on a remarkably shallow note. The last big line of this year’s SPRING was about politics, and the microphone was given to the newest generation. In the double bill Eviatar/Said and Rising, Tel Aviv’s independent choreographer Shira Eviatar and her collaborators (Evyatar Said, Abat Amrani) perform their own dance heritage – Moroccan, Yemenite, Palestinian – reinterpreting it within their own youthful positions. Looking at physical memories and reformulating them for the stage, Said’s exploratory solo is particularly playful, but in no way innocent. Like a child, he laughs at us, he sings, he jumps, he searches, depicting an intimacy both endearing and politically powerful. Through vulnerability and joy he claims a space. His space.

Speaking not so much from youth as to it, Permanent Destruction’s HM Concert sets out to break taboos in our very correct daily newsfeed. Singer-songwriter Noemi Velissariou and musician Joost Maaskant triumph in their festival comeback after rocking last year’s boat with The SK concert. An in-your-face parody-concert combining trap-like musical scores with Heiner Muller-based lyrics, The HM concertbrings 90s anger back into fashion with mean, cryptic and refreshingly incorrect songs: ‘today is pay-day, boys…’, ‘every (dead) man is a man too few’. Velissariou sings of  misogyny, suicide and the wish  for a man-massacre on easy beats, surrounded by neon,  flashlights, and two male dancers in shorts.  Leaving the Horse-Cathedral (yes, that’s the name of the venue) I bought a jumper which reads: ‘You can’t fuck’. It was a weirdly healthy evening.