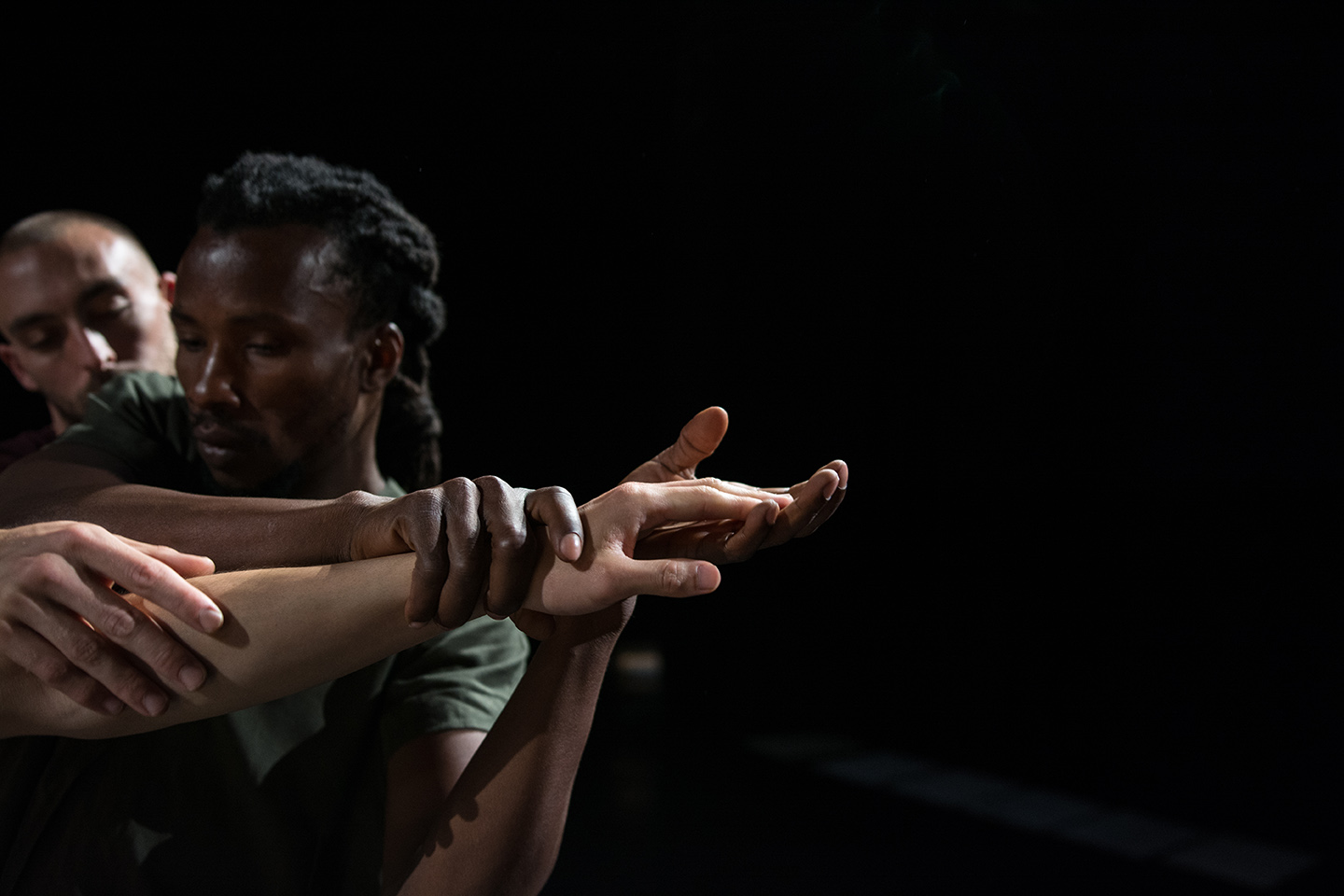 What You See Festival, which questions dominant narratives regarding gender diversity and inclusion in the performing arts, combines a clear political agenda with work and context that open out to further conversations outside the theatre. Experimental yet didactic. ‘Radical Tenderness’ is therefore a fitting theme for this year’s edition. Next to an outstanding online programme, the live programme included the Dutch premiere of Tender Men by Koen de Preter, seen at Theater Kikker on 22 November.

The choice in cast stands out immediately. Four carefully chosen male performers from different movement heritages – a graduate from the Dutch contemporary dance school SNDO, a dancer formed at PARTS in Brussels, a neoclassical-martial arts specialist and a self-taught b-boy/contortionist – with contrasting skin colors and cultural backgrounds (reads the program). As for the choreography, most of the scenes feel like task-based games where one idea has been tried out and brought to a certain limit before being woven into a whole. This playful, at times even cheeky competitiveness (in itself a take on normative male archetypes) allows for beautiful moments of presence, where we get to see them while having boyish fun.

The whole piece drives on playing with contrasts. One moment they move around each other looking for – and offering – places to kiss or be kissed (an elbow, a neck, a stretched out foot, two lips); next we see one of the dancers stoically enduring a harsh kicking from the other three, while standing expressionless mid-stage, facing front. After a long silence, at the end of this scene another performer takes him by the hand and starts hopping with him in a structured pattern on the floor. Still expressionless, still facing front.

In addition to the contrast between kicking and caring, this sequence is also an example of a certain tension between the readable gestures – symbolic, storytelling – and their placement in a choreographic structure. De Preter seems to purposely avoid homoerotic readings of the actions shown. Thus, staying close to the physical exploration, the questioning of conventional masculinity happens organically. Observing what feels as fitting the bill and what does not, I wonder: why is that? Why is it necessary to avoid homosexual readings of a gesture in order to keep the topic of masculinity at the centre? Can we come to associate softness or care with the norm?

Another prism: giving space for a solo by each performer, De Preter taps into the performance of masculinity within their different dance forms. While the more fixed codes of breakdance and martial arts account for a performance of topically male poetic values (strength, stamina, bravura); the ways of the more traditionally modern approaches (modern here meaning closer to the self) result into softer, more intimate performances of movement. Is any of them less of a man because of it? The point of the game of contrasts in this piece seems to tap into the same answer time and time again: No. No. No.

Jumping from moody and impressionistic to Bruce Springsteen (who else?) or Tina Turner (“we never do things nice and easy, we always do things nice… and rough”), the musical score makes sure the piece is never taken too seriously, while still bringing anchors to the set. At last, that is what this is all about. De Preter wants Tender Men to relate and be related to, so much is also clear from the extensive handout, filled with quotes, context references and an inspiring essay by Lieve Dierckx. While Tender Men is a successful exploration of the affective and corporeal potential dance can bring to any subject, the piece raises questions that place it in a larger, also rationalised framework, beyond the time and place in which it takes place.