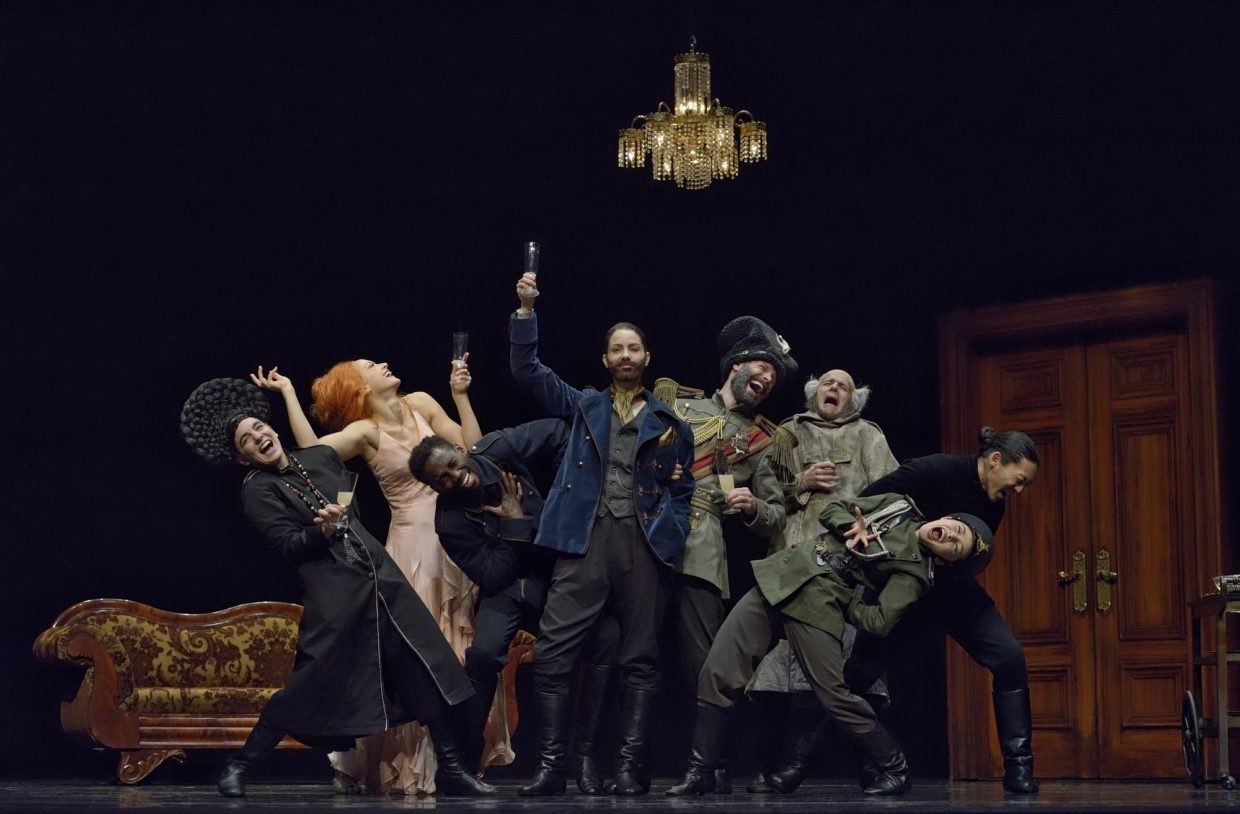 When Crystal Pite puts her talent in the service of music – Partita for 8 dancers (NDT, 2018) for example – the effect is mesmerizing. One could look at her group combinations for hours, her dancers moving through space as if they were flocks of birds reacting to each others echo. When she throws herself into more dramatic contexts – as happens in Revisor, seen at ITA Amsterdam on Wednesday 11 March – the focus changes. On those occasions we are not just in visual awe, but we are also entrapped by a dramatic labyrinth, the story-line being made to dance alongside the bodies.

The Tempest was undoubtedly the best Shakespearean play to be modulated into such a choreographic venture (The Tempest Replica, 2012). In Betroffenheit (2017), her first collaboration with playwright Jonathon Young, the turmoil of his troubled mind also provided an ideal frame for this deconstructed way of storytelling. The plot of Revisor, a new Pite/Young production for her company Kidd Pivot, is equally fitting: a burlesque satire exposing corruption within a bloodless, pen-pushing and over-bureaucratic power structure, based on The General Inspector by 19th century Russian author Nikolai Gogol. Dance here contributes to the confounding of meaning in a piece where nothing is what it seems.

“The complex has seen better days”. A female voice-over guides us through the plot: the director of a provincial branch of a governmental institution is made aware of the arrival of an inspector, who would presumably be there to look into “the lack of…” or “the disregard for…”. He mistakes this inspector for a low ranking official – who is actually there on assignment to “push a comma” within a given report. The impostor – played in cross-dress by Tiffany Tregarthen – allows them to believe he is who he isn’t, and so forth and so on.

The Kidd Pivot dancers embody the recorded voices of other actors. The crafty precision of their delivery alone – matching their physical virtuosity to the words in a way that the distance between the two is never felt – already makes this piece worth anybody’s while (special mention to the remarkable performance of former NDT-dancer Gregory Lau in the role of Postmaster Wieland). Then comes the value of the way in which the story is told. As we follow the picaresque characters with a smile, Young and Pite play with text and movement alike to diffuse the clear political critique of this farce by means of abstraction. Or does it actually become sharper because of it? The projected and constant scribbles on the backdrop serve as a possible metaphor of how any given statement can get lost beneath a myriad of different stories.

As one of the officials says at one point: “The truth has a shape that cannot be contained”. This becomes even (un)clearer when the focus of the action is turned precisely towards shape and form. The story is put to a stop and re-winded. Scenes are repeated, but the dancers – now dressed in plain grey clothes – extend the previously seen choreographic phrases as the voice-over describes their moves. Is this the actual report? Is this what is to be found beneath the commas that need pushing?

The ultimate success of Revisor is that towards the end the plot resumes. Other than in Betroffenheit, where dramatic and choreographic universes were separated by a fifteen-minute break between two acts, here we get a sense of theatrical closure, merging choreo-dramatic bafflement and visual awe into one. Were the theatres not closed because of covid-19, I’d go see it again for sure. But our own complex has also seen better days, apparently.

What don’t I miss?