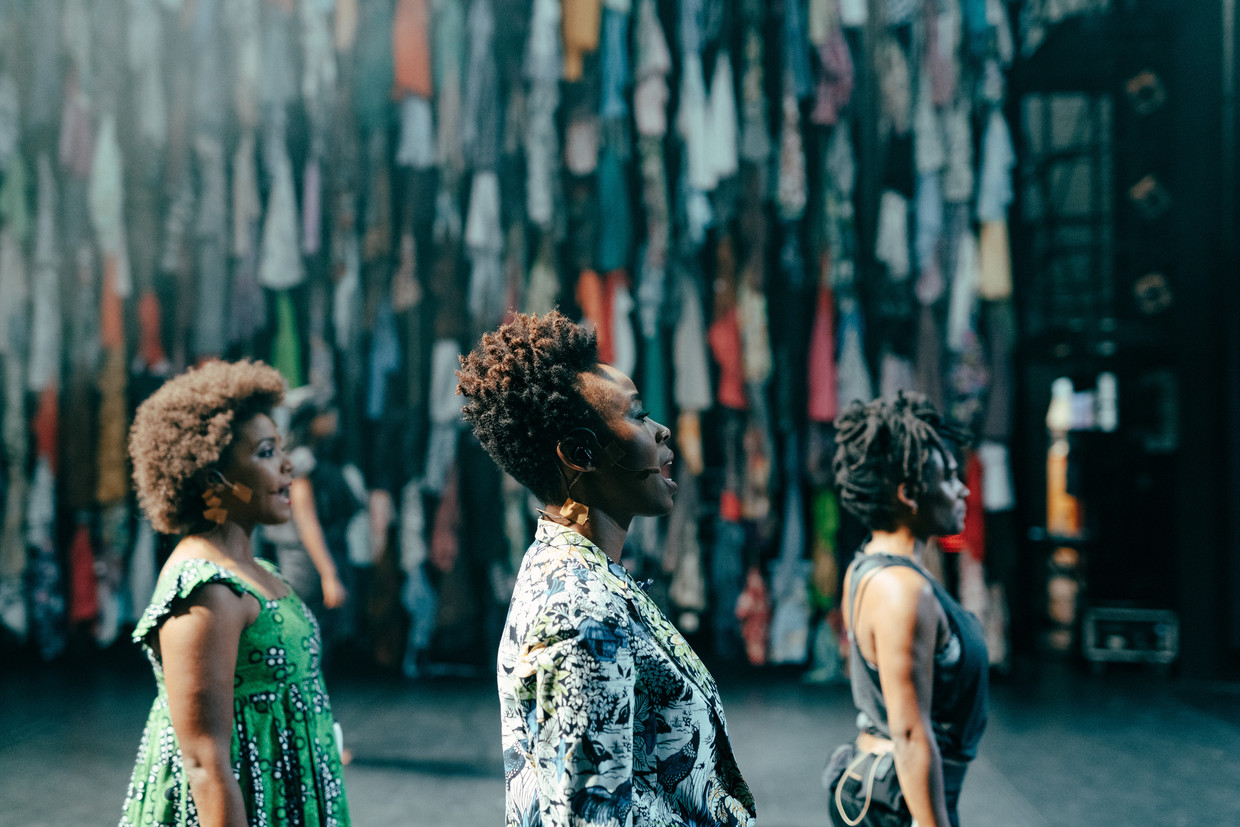 Anger is a strong fuel for activism. So much is clear in Dear Winnie, seen in Arnhem on 17 February. Departing from the story of Winnie Mandela, nine black women tell us about their resentment against a common, faceless, often white and often male enemy. Combining an account of historical events with their personal memories, fables and thoughts, this two-hour patchwork – led by writer Fikry El Azzouzi, director Junior Mthombeni and composer Cesar Janssens – broadcasts their anger and a warning: their fight is not yet done.

Shortly after the start, the nine women mockingly deliver Desmond Tutu’s plea during the trial against Winnie Mandela in 1997, facing the audience: “You don’t know how your greatness would be enhanced if you’d say, ‘sorry, things went wrong’”. Suddenly changing their voices to fierce, they offer a choral response: “Really? How dare you!” The tone is set.

Over and over again – and using Judy Garland’s Somewhere over the rainbow as a running gag – they undermine the re-branding of South Africa as a peaceful, cool and diverse country. “Roses die fast, but the thorns remain”, “our bodies still hold the scent of the past”, and a final “gentle healers make stinky wounds” clearly deliver the message. As a response to the commodification of Nelson Mandela and Desmond Tutu as father saints of white good-will, these nine women exalt the memory of Winnie Mandela instead, presenting her as a mother sorcerer who gives them strength to stay on course. In other scenes, some sing or speak or dance their own experience, bringing the conflict closer to home – “fuck you Sinterklaasje” said with frontal disdain included, and accompanied later by the statement: “racism is only racism when white and privileged says so”.

Thus, they walk, talk, discuss, shout, laugh, cry, sing and dance, rhythmically weaving one fragment into the next. This choreographic structure impedes the build-up of a narrative logic and translates into several false endings that needlessly exhaust the material. But, on the other hand, it also allows for the whole to be experienced as a powerful whirlpool of diverse voices spurting out from a single and offended pressure-cooker. Dear Winnie is an excluding piece which focuses on the inalienable right of these nine women to be angry, to not make concessions to the status quo, and to not be responsible, at this stage, to offer a way out of the conflict they denounce. This is not a peace offering.

Yet, thanks to the mechanical and musical installations created by Janssens, which are a big part of the stage design and a true hit within the performance, a constructive energy is also present. Some are mechanically driven – a big, circling structure with several black boots hitting the floor, for example – others emit sounds when engaged by the performers; they blow into iron pipes hanging from the ceiling or move an iron ball up and down a mechanism to generate static sounds. New tools to generate old sounds in a new context.

As a white, cis-gender male; underdog in some of my dimensions and privileged bastard in many others, I saw Dear Winnie with called for, distant respect: this piece was neither for nor about me. Yet, in the construction of their own soundscapes I chose to see a glimpse of something other than bitter scolding. Maybe it was wishful thinking, or something for a next piece, or for the streets – it certainly isn’t for me to decide. For now, this creative collective just wanted Dear Winnie to be heard. And they succeeded.