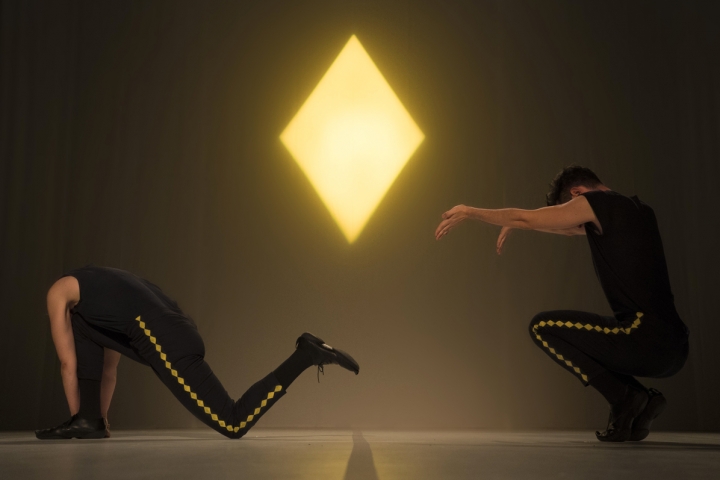 The question was posed to me over dinner after the first day of Spring Forward 2019. A bit startled, I admitted to having indulged in the pleasure of drifting away into the crafty world presented by Harleking, for example, and of interpreting it according to my experience of reality without necessarily being worried about any lack of outspoken activism in its content.

During the next days a larger question of engagement kept me busy. Many of the works we saw focused on two choreographic and dramaturgical choices: slow-motion and repetition. And while some of them – like Chiara Bersani’s Seeking Unicorns or Elinor Lewis and Nuria Legarda’s installation-performance Orchard – succeeded in using slowness to suck us into interestingly layered journeys, others just fell flat. Both James Batchelor’s Hyperspace and Drift (I, II), by Thomas Bîrzan and Mario Barrantes Espinoza, used slow-motion in uncanny attempts to push out patience to the limit. And there was un-evolving repetition in Katerina Andreou’s clubbing solo BSTRD and Lina Gomez’s ritualistic-wannabe duet Restraint.

In their varying ways these works, all lacking sufficiently strong development or a clear dramaturgical aim, built thick walls between us and them. And as the festival went on I felt more annoyed about productions that willfully disregarded the audience’s point of view than worried about any lack of anger, political or otherwise, in their content. I was annoyed because the perceived aim to transmit real, authentic experience on to the stage comes, historically, from a desire to use the theatrical event to shake things up and change the world. Trying to do so now without further thought betrays this origin and actually has the opposite effect: it triggers no thought and has no, or little, impact.

A century ago Bertold Brecht and Antonin Artaud believed that by breaking the fourth wall and bursting the bubble of theatrical illusion the passive spectator would be shaken into action. Isadora Duncan, meanwhile, was hopping around barefoot on the dance stages of Paris to break with balletic fantasies and connect with her audience in a more direct, natural way. Attempts to shatter conventions and confront the audience with reality in order to change their perception of it have been numerous and immensely valuable in keeping performing arts alive. Within this tradition, the use of slow-motion or repetition until exhaustion were breaking news sixty years ago. Back then, Yvonne Rainer’s “No to Spectacle” championed dance to counter the media-fuelled fictions emitted by the machinery of power. These were theatrical resources with an agenda.

But today we have a different agenda. We live in a time when the construction of narrative isn’t denied anymore but acknowledged. We know now that every-body is always the narrator of a gendered, socio-politically constructed story, one that can be questioned and ultimately modified. Dance, operating on the threshold between the physical and the existential, is a great asset in this. When crafted and cared for in both a choreographic and a dramaturgical sense, dance can invite the audience to connect beyond the artist’s intent. And when that happens the potential meaning of a work – its story, the meaning of its crafted illusion – can become apparent through a shared, collective effort. Or a collective laugh, as in Muyte Maker by Flora Détraz. Or a collective sense of much needed tenderness, as in Sylvain Bouillet and Lucien Reynes’s Les Gestes Blancs.

Article published on april 30th 2019 on the Aerowaves website.