(EN) – Not a moment too soon – Ferran Carvajal 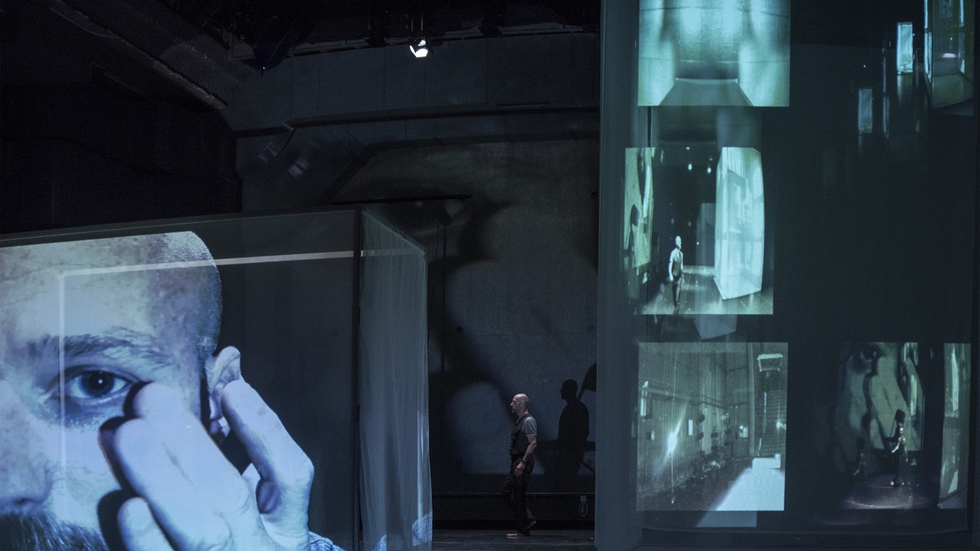 Not a moment too soon looks promising.

The impression of being faced by a preordained project becomes clear immediately. It is as if its development was the inevitable result of the existence of a series of materials and events: the project organized itself, so to speak. Summoned into being by the remarkable partnership of Merce Cunningham and his accomplice and executive director Trevor Carlson. And by the fact that Ferran Carvajal has worked personally with Trevor since 2007 and became an ad hoc witness to that partnership for a while. And because the latter became part of this project following the intuition of the former and due to the fact that Trevor gave Merce a camcorder which he used to record himself: because this material exists (!). And because Trevor Carlson took such fervent care of The Legacy Plan for the Merce Cunningham Dance Company, implying an accumulation of reflections on a issue of burning intensity: the survival of the personal and artistic legacy after the death of an artist or creator when the material they worked with is as ephemeral as the body in movement.

The interest in the raw material is joined by the interest aroused by the artistic challenge involved in making a show lying somewhere between documentary, biopic and video art, harvesting a fruit as slippery and uncertain as memory. Intimate, always subjective, treacherous. Using dance and its potential to generate endless semantic summations in the space of the unsaid; trying to press the exact buttons of a memory – and doing so in the right measure – so as not to distort it in its transition to the stage. Which is like taking a ship out of the bottle without taking it to bits, piece by piece, attainable only by shining a light from a corner to project a mirage of the sails on the other side of the glass.

Awakening a mirage: this is how Carvajal and his playwright, Albert Tola, describe the onstage aspirations of Not a moment too soon: “Merce is reflected in Trevor, and Trevor in the public.” They propose a sentimental journey through the memory of a subject, going beyond a purely documentary vocation to reach more subliminal, interstitial territory, lying between the facts: the reconstruction of personal memory and the emotions this arouses in the narrator and the audience that listens to, sees and experiences it.

But the sensitivity of the material also stems from the particularities of the private life under observation. Like it or not, Not a moment too soon attracts the attention of the slightly morbid, nosy neighbour everyone has inside, only too happy to get a glimpse of the “real” Merce Cunningham through the recorded images; peering through a crack at fragments of a life shared with Carlson and governed perhaps by the postulate of “not a momenttoo soon” as the epitome of timelessness (the concept of Zen philosophy that so influenced the great love of Cunningham’s life, John Cage).

A postscript for the hard-to-please: bearing in mind that Merce Cunningham is the father of video dance, a point of added choreographic interest is precisely seeing how video is used in the show to merge all the dimensions of time into one: the present. And seeing how Carvajal, Tola and Carlson create this show as a tribute to a memory of intimacy, which emerges at the moment of presentation and not a moment too soon. And how this present event fits in – if it does fit in – with the use of video made by Cunningham himself in his particular crusade: to present dance as a fleeting moment and nothing more, beautiful and good to watch for its own sake, without additions.

Cunningham aimed to create a dance supposedly devoid of the emotional chain of meaning linking body and metaphor, and turn it, by contrast, into an open intellectual and aesthetic event. He wanted to avoid at all costs dictating to the audience what or how to watch. Using chance as a compositional resource, for example, he turned the stage into an anthropic universe of infinite possibilities and developed dance through compositions that appeared by order of the laws of probability. Full stop! The phrase “not a moment too soon” can also refer to this way of doing things: dance that calls itself into being at just the right moment. Neither before nor after, and not decided by anyone.

Let’s recap. The postscript refers to Merce Cunningham’s poetics, using the pretext of presenting a show related to the choreographer. But Not a moment too soon is not intended to be a piece by or in the style of Merce Cunningham. In fact, the first and last aspiration of the show is of a more universal order: to find sufficiently porous elements in the story of a subjective memory to live the imprint that one life has made on another life. And generate, in doing so, a new imprint: from Merce to Trevor, and from Trevor to the audience.

What an aspiration. What a gift.

Not a moment too soon – Ferran Carvajal