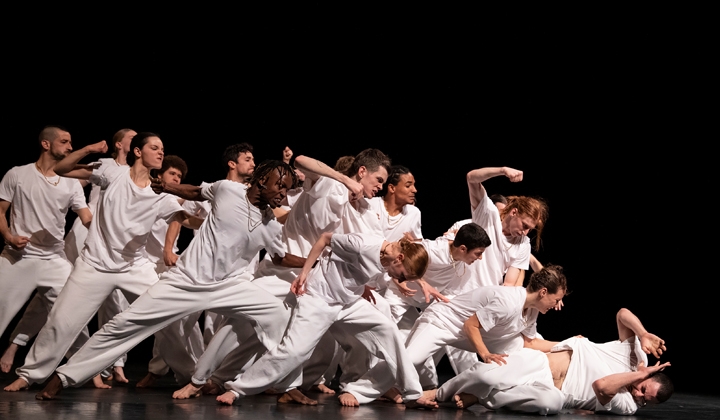 After the prolonged focus on spotlessness and distance, on 15 September the Ballet de Marseille refreshingly filled the Rabozaal at ITA with an evening of poetic, dancing and historical contaminations. And girl: do we like it dirty! The merrily diverse audience (in terms of age and aesthetics) effusively cheered the program compiled by the (La)Horde collective. Childs-Carvalho-Lasseindra-Doherty: four female names and four different takes on re-composing gender through movement. A powerful after-summer reverb of this year’s Julidans Festival.

The biggest bombshell is Lasseindra Ninja’s Mood, after the break. Three male dancers in golden, dazzling bodysuits start by sensually undulating their glistening bodies in the semi-dark, mid-stage. They – Nahiman Vandebussche, Daniel Alwell, and apprentice Isaïa Badaoui – also carry the structure of the choreography with three solos. After the introduction, Vandebussche reappears from a sudden black-out mid-air, falling from a jump that will echo throughout the explosive phrases that comprise his solo. After him, Badaoui swiftly introduces the next duet, voguing his way across the stage and stealing the spotlight: clearly, this is a style he feels at home in. Alwell’s second entrance is the most iconic – decked out in a pink unicorn horn, tall boots and leather jockstrap. After a chorus of similarly dressed and genderless unicorns joins him, they engage in a collective choreography that incorporates openly sexual gestures. Costumes and moves unite pornography and queerness, things considered taboo by a part of the status quo, and being re-claimed and shamelessly re-framed and celebrated within movement cultures such as voguing.

The choice to open the evening with Lucinda Childs’ Tempo Vicino (2009) was (La)Horde’s most interesting choice in terms of historical framing, as combined with Mood we could see the geographical, political and poetic gap closing between the New York Harlem Balls of the 1970s and ’80s, where voguing came to be, and the postmodern Judson Church in the Upper East Side – where Childs started her career more or less at the same time.

Childs found her way to minimalism at a time when the (predominantly white and western) dancing body on stage was freed of the need to represent anything other than itself. Childs’ take on this fight against the then demonized Society of Spectacle implied boiling down her compositions to a mathematical game with the formal elements of her medium, considered ‘neutral’. Most of her choreographies are mathematical movement challenges that combine pedestrian movement with balletic code – and in the case of Tempo Vicino it is set to an equally challenging and disharmonic musical score by John Adams. Although it is not the easiest piece by Childs to watch, we were carried through by veteran Yoshiko Kinoshita and Nonoka Kato, who sailed through it, clearly enjoying hitting each and every accent with their pointed feet.

Tempo Vicino is also historically interesting because it showcases how issues relating to the representation of the (dancing) body have shifted over time. Still made up mostly of male/female duets, the piece differentiates between the sexes through costumes: only the female dancers wore asymmetrical tops showing one shoulder. Within this program, Childs’ mathematical composition revealed itself to be not so neutral after all.

Following suit, Tânia Carvalho’s creation One Of Four Periods In Time is a funny and histrionic choreography casting the whole company. At first, the dancers all appear dressed in translucid, light-blue princess dresses and bright red socks. In the second part, in a (possibly not-intended) hint at Childs’ dress code, they reappear wearing black asymmetrical swimsuits that leave the legs and one shoulder uncovered. Their clownish eyebrows make the caricatural genderlessness even more evident as they transition swiftly from one extreme, gimmicky tableau-vivant to the next. The tableaus are clearly not about the emotions they represent. Their purpose is to use the physicality of these ‘characters’ as tools in a visually appealing choreography that combines moments of chaos and harmony within a homogeneous esthetic.

Oona Doherty closes the evening. Her acclaimed solo Hope Hunt and the Ascension into Lazarus has been turned into a choral choreography especially for the Ballet de Marseille. Featuring white T-shirts and jogging pants, golden necklaces, and Allegri’s Miserere Mei in the background, Lazarus is presented here as a Ballet Blanc for the 21st century. The gestures and emotions depicted, however, do not refer to swans or nymphs in a children’s story, but to angry working-class boys roaming the streets of Belfast. The piece embodies the singularly male aggression in service of a collective choreography – and the most beautiful thing about it is that it shows the violence in a softer light, a vulnerable one, inviting us to look – once more – beyond our first impression.