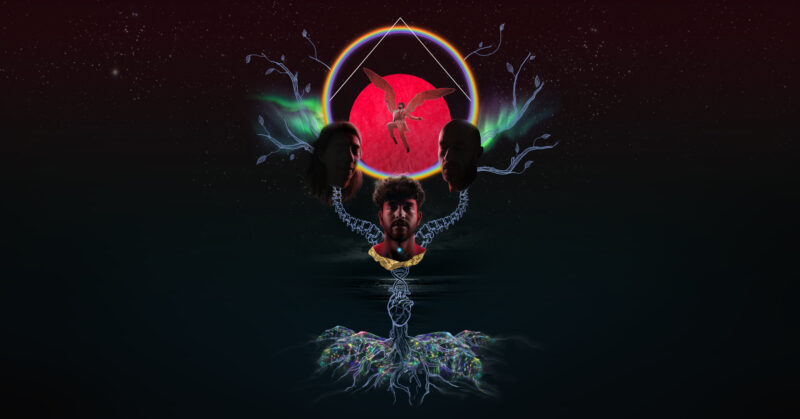 “We have 45 minutes to change the world… cuarenta y cinco minutos… what do you see? A body… a container… an angel or a demon… could I be an artifact for you to see life?” As unrelenting as he is generous, Ariah Lester’s Viajero del Amor (A lover’s journey) was the absolute highlight of the Date Night Route organized by Operadagen Rotterdam on 26 September.

Three short performances have been combined in one evening across different spaces inside Theater Rotterdam. This curatorial (commercial?) choice presumably limited the length of Lester’s project. It is one of the many dimensions of theatrical realness he targets in this brilliant and incisive offering, somewhere between a concert and a choreographic lecture.

As he sings mostly in Spanish, he provides the lyrics in both Dutch and English in the programme. This resource, however, is turned into a pamphlet for a larger agenda. Added to the digital clock on stage that counts down from 45 minutes to zero, the last page introduces a song that will not be heard. A note says: “Sorry, we didn’t have time to play this song”. Scattered between the lyrics are meditative affirmations claiming the artist’s right to exist in this part of the world and at this point in time, plus other questions that turn the show into a trigger for larger thoughts: “Can we talk about spirituality on stage or is it a third world country’s bullshit?”. They may be printed, but some sentences read like hasty scribbles written in an outburst.

The costumes by Javier Murugarren – who also accompanies Lester on stage – elevate the whole play: morphing, elaborate, and covered in colourful drawings by Lester himself depicting ancestral symbols from one of his local contexts: Venezuela. The dramatic reality of many people currently fleeing this country is also present in video projections. Through them, the work also addresses the broader topic of migration and the problematic closure of borders by countries with a colonizing past. “Am I responsible for what my ancestors did? Do I want to become my parents or do better,” the pamphlet asks.

Ariah Lester sings beautifully, of the power of love as a source of acceptance and ultimate freedom; of people who have to fake their identity to cross a border; and of broken mirrors. The latter image again asks what we want this theatrical event to be. Is theatre a mirror? And if so, who peers into it and who is reflected? Can the tables be turned? Could we all be one in this act of reflection and if so, could this united body actually become an artifact for change, indeed?

With its amalgam of political and spiritual references, real and fictional images, poetic songs and ted-talk like sentences, Viajero del Amor unfolds in a well-paced and open structure. Lester – saucy and bold in his role of master of ceremonies – ties it all together, dancing around with verve, making fun of himself and playing with the other elements on stage. As the audience enters he lies waiting on a cross wearing sunglasses and high-heeled white leather boots. Later we see a wooden triptych descend on him like Mozes’ tablets – but on the inside, there is nothing but (wink) mirrors. Big cardboard boxes are tossed around and a big heart covered in sequins becomes the centre of an improvised altar. And so on and so forth.

Entertaining, challenging and queerly beautiful, both the artist and the show prove that sometimes, more is more.