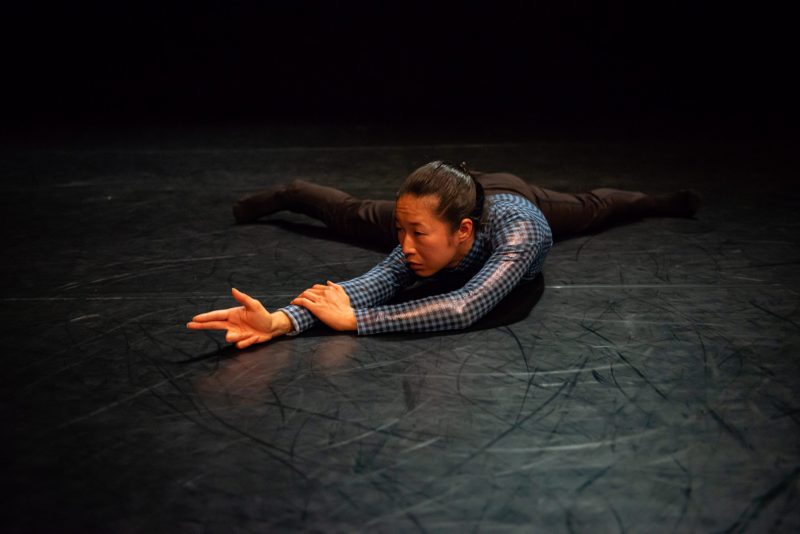 On 9 September Korzo presented the world premiere of Gömböc, by French choreographer Antonin Comestaz. It was part of a full-length programme also including Tam(b)u (2018) – Junadry Leocadia’s powerful solo re-exploring Curaçao’s rhythmic and choreographic heritage to tap into its hidden history – and the Covid-inspired dance film Saudades by Wubkje Kuindersma.

In pitch-black darkness, a recorded, overly happy female voice invites us to a journey of daydreaming. As the voice continues to address us as if falsely reading from a children’s book, a spot of light appears, revealing Ema Yuasa’s face bearing a lacklustre expression. She starts to move with apathy. “Look! There comes the morning light…” The contrast between the tone of the voice, the darkness, and Yuasa’s expression sets the dramatic frame within which the next thirty minutes will unfold. We go to black again, and Yuasa reappears elsewhere on the stage, now lying on the floor and mimicking a funny fish with the same vacant, somewhat tired expression.

Using a gömböc (a spherical object with just one stable and one unstable balancing point) as a metaphor for the human psyche, Comestaz proposes a journey into Yuasa’s mind. Utter darkness alternates with slightly comical scenes – Yuasa dancing to Japanese pop music, for example, flashing disco lights included – and with long streams of choreographed movement where the crafty and experienced dancer entices the viewer with her movement.

As she glides, falls, breaks and flows before our eyes – her 11-year career at NDT palpable throughout – she continues to look somewhat unhappy. The aimed-for metaphor (the psychological balancing act between light and darkness we can all relate to these days) is also instilled in various choreographic choices, like the way she ignites several movement phrases by just dropping a lifeless limb or two after a pause, her straight face looking forward.

Comestaz has a cheeky way of bringing things together. Gömböc is not heavy-hearted. The fragmented structure is engaging at all times, and the musical accompaniment, designed by himself, opens up to other realms of imagination. Sounds of nature and cars passing by evolve into more electronic and darkly emotional sounds, until a more childish tune jokingly takes us back to the tone set in the introduction. We are invited to smile in wonder, as we navigate from one scene to the next.

Ema Yuasa’s physical skill adds depth to the piece. As she represents a slightly funny theatrical version of herself through her expressions, she defends the solo with elegance and mastery of movement. Gömböc is dance as an open form of storytelling. A conventional and old-school solo, crafty and balanced, geometrical yet odd. Like the object that lends it its name and which, in Comestaz’ words, holds “a certain duality between balance and confusion”. Like the human psyche, sure. And like dance, when used as a dynamic and labyrinthine language of moving, embodied signs.