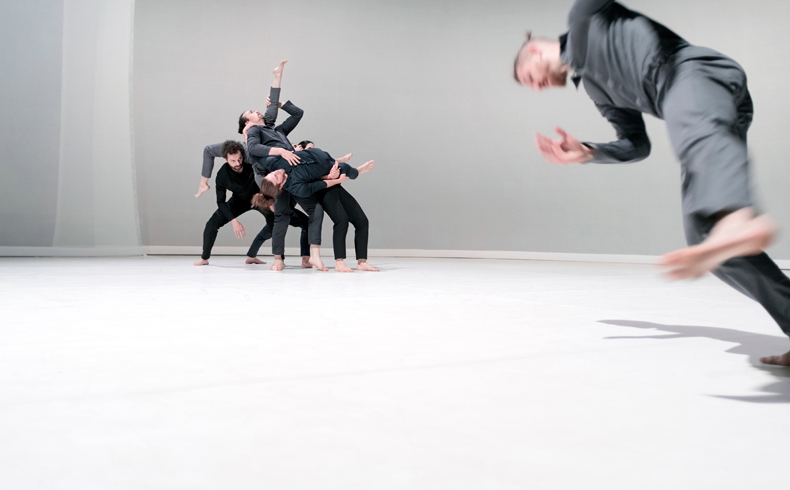 In an article written on the occasion of the premiere of Set of Sets at el Mercat de les Flors in Barcelona, the Catalan dance critic Bàrbara Raubert reminded us of a beautiful poetic prerogative of dance: “An absurd effort, that is what dance is”, she wrote. “An almost inhuman force – often accompanied by movements and gestures, some lengthy extensions of the body, perhaps even some jumps and turns combining all the possible axes – to go nowhere. Dance implies a series of magical exercises that make her as elusive as water in the abyss of a waterfall”. “Beyond the physical journey”, Raubert closed her reflection, “dance invites us to go on mental and signifying journeys that can take us as far as the infinite goes. The body is thrown into the infinite”.

Guy Nader and Maria Campos already showed with their first long piece – Time Takes the Time Time Takes (2016) – that they wanted to go back to the basics. Call them alchemists, artisans of the choreographic practice. Rudolph Laban theorised dance with a similar goal in mind in the early years of the XXth century. Thanks to his teachings we often talk about dance in terms of effort, flow, dynamic, momentum. Time and space are devised by the effect the combination of these elements bring about, every time anew. And that is what dance does, essentially. But in order to do so, the dancing body needs to be fed by a vital paradox: To become this object of force – this physical, well oiled technical whirlpool – it needs the spur of existence, the energy of the subject that starts and stirs every move.

In an interview after the preview of Set of Sets during the Sismògraf Festival 2018 in Olot, Guy Nader referred to this paradox. Even if they do not focus on the relational, human storytelling spiral of their work, he said, they acknowledge its existence. Again: artisanship, choosing to let the dancing body do the work, and allowing for the active look of the spectator to fill in the necessary blancs in the equation.

Set of Sets is a well-oiled group choreography that focuses on collective timing, on rhythm and risk, on repetition and variation of movement. Nothing else (but that is already a lot). Eight dancers and a musician that operates with the group on stage strive for the precision and inhuman, impossible perfection of a machine; they seemingly happen to find each other over and over again in the right spot at the right time. We see the study of the mechanics of elevation in detail: start, stop, tension, release, breathe, hold, let go, up, down, up again. Back to the basics. What is left of their precision is what matters: the echo that resounds and that extends the movement beyond itself. For example, when the dancers find a stop in several group positions: for a few seconds, we see Time moving in suspense, as happens when we look at water in the abyss of a waterfall.

And of course, as Nader says, this brings about infinite possibilities of decodification: the frightening beauty of the synchronous group, the necessary relation the dancers build with each other through their eyes and their awareness. Interdependency as a proof of collective strength, for example, is a very much actual and political theme that this piece undoubtedly can relate to. But in order to vaguely do so – which is how dance relates to any meaning – it needs to resound in the echoes of the technical machinery, in the effect of effort and not in the effort itself.

GN/MC prove themselves to be capable of generating just that. If Time Takes… was a first successful tryout of their debugging method, in Set of Sets they step up their game presenting a collective, choreographic/architectonic piece of artisanship that holds a beautiful balance between analysis and extasis. A balance that, as Paul Valery said, is necessary for every act of creation.